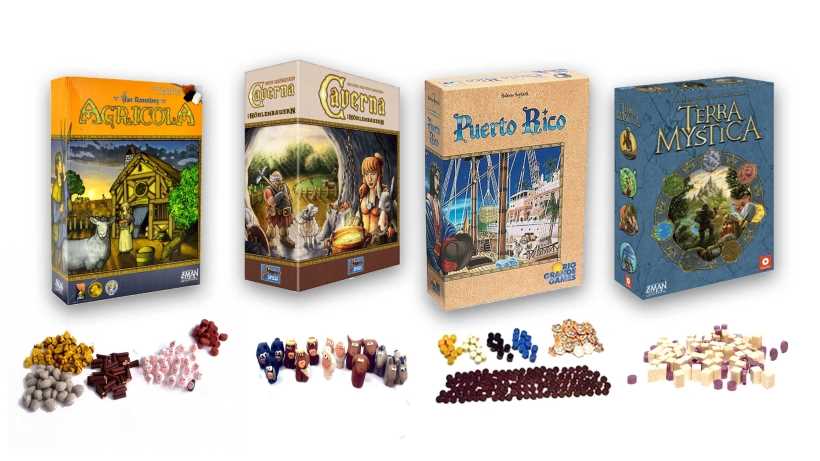 We compare the top eurogames on Board Game Geek: Agricola, Terra Mystica, Caverna and Puerto Rico. Which of these German-style games is the best and why?

German-style games such as Settlers of Catan or Carcassonne are to a great extent responsible for the new golden age of board games. These are gateway games that have helped millions to enter the hobby. However, here we discuss gamers' games, these meatier experiences that require your brain work hard. Sometimes too hard. Games where you may suffer analysis paralysis due to the wide variety of choices, strategies and paths to victory. Games that require and investment in time and effort but which normally turn into very satisfactory experiences. Today we discuss four euro games that are in the top ten of Foard Game Geek ranking: Agricola, Terra Mystica, Caverna and Puerto Rico.

Agricola was created in 2007 by the German designer Uwe Rosenberg and published by Lookout Games and Z-Man. In Agricola players are farmers that sow, plow the fields, collect wood, build stables, buy animals, expand their farms among any other actions. At the end of the harvest in the 14th round players calculate their score based on the type and size of the farm and family, number of fenced stables, plowed fields, animals, grains and vegetebles collected. Agricola is one of the best worker placement games and has an extremely well balanced gameplay where resource management is key to success. Agricola has several expansions and earned many international awards including the Spiels des Jahres and the Golden Geek Award in 2008. Agricola is currently ranked 6th on Board Game Geek.

We also owe to Uwe Rosenberg the second game in our list. Caverna: the Cave Farmers was published in 2013 and follows the footsteps of its predecessor. The gameplay is similar to Agricola, although here players are leaders of a small dwarf family that dwell in a cave. In Caverna players do similar things than in Agricola. But there are some subtle differences that transform to a great extent the experience. In Caverna there are more options open from the beginning of the game because all furnishing tiles are open for purchase. In Agricola, extension cards available for purchase are drafted, which limits the choices but increases diversity from game to game. In Caverna you can you can send your dwarves to adventures and acquire rubies, moreover is usually a less punishing game. Caverna has not earned as many awards as Agricola but is now ranked higher on Board Game Geek (3rd vs 6th)

Puerto Rico is a German game designed by Andreas Seyfarth published by Alea and Rio Grande Games in 2002. Puerto Rico is currently ranked 5th on Board Game Geek, but it led that classification for several years. This is a economic strategy game set in the Caribbean where players grow crops, build buildings, and ship goods to earn doubloons and victory points. In Puerto Rico players have different roles and usually focus either on trading goods (usually of low production costs) or on making money by producing tobacco and coffee and build buildings quickly. This game has an active community and tournaments of Puerto Rico are organized regularly. Puerto Rico has won several international awards and been nominated to many others.

Published by Feuerland Spiele in 2012, Terra Mystica is considered one of the heaviest games ever designed. The german designers Helge Ostertag and Jens Drögemüller have managed to create one of the deepest gaming experience in the hobby. In Terra Mystica each player controls a fantasy race that is trying to expland its civilization. Players terraform land, build and improve buildings and infrastructure, and advance their cult tracks. This game has a unique power mechanic that allows players to cast spells or obtain resources. Each of the 14 races in the game has different strengths and plays differently. This add diversity and replayability to Terra Mystica. Terra Mystica is currently ranked 2nd on Board Game Geek and has won several international honors including the Golden Geek and Deutscher Spiele Preis awards.

What do you think about these games? Do you like eurogames? With which of them do you have a more enjoyable experience?

Best eurogame: Agricola, Caverna, Puerto Rico or Terra Mystica? Vote and tell us why and the type of mechanics that you enjoy the most.