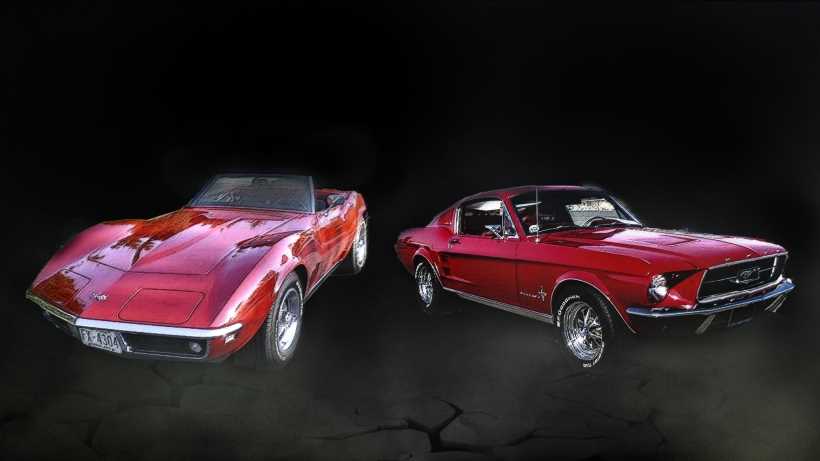 Source: Composite by G_marius based on Barnstarbob's and Curtis Perry's image

The Chevrolet Corvette and the Ford Mustang are two of the most iconic American classic cars. But which of the two deserves the title of all time best?

Many legendary cars have been created in the USA such as the Ford T, Cadillac El Dorado, Mercury Eight, Dodge Viper, and Pontiac Firebird. However, there are two cars that tend to top the list of American classic cars fans: the Chevy Corvette and Ford Mustang. These two cars have heavily influenced the industry and become somehow an important part of the US cultural legacy. It is not surprising that many successive versions of these two classic muscle cars have continued to be manufactured over the last five decades. Moreover the rivalry among the fans of both cars still continues today. The seventh generation of the Chevrolet Corvette (2014) and the sixth generation of the Ford Mustang (2015) compete in the same segment. We want to honor their loyal fans and this American automobile tradition with this public debate. Let's see which is considered the greatest one!

The Ford Mustang was originally a concept car that evolved into the 1963 Mustang II two-seater prototype. This car was the result of the work of several designers and experts in market reserach. In 1964 the first Ford Mustang rolled out of the assembly line in Deaborn, Michigan. The Mustang is considered the first "pony car", a new class of American sports-car with hort rear decks and long hoods. The Chevrolet Camaro, Pontiac Firebird and the Dodge Challenger followed the Mustand footsteps. Over the years the Ford Mustang has undergone many changes throughout its six generations: First generation (1964 1/2–1973), Second generation (1974–1978), Third generation (1979–1993), Fourth generation (1994–2004), Fifth generation (2005–2014), Sixth generation (2015–). Despite all the transformations, the Mustang has managed to maintain its distinct character and allure, and today it stills captivates the heart of millions of Americans.

Do you love these two cars? Probably you do, but now we have to decide which one decides the tittle of American all time best car.

Best american classic car: Chevy Corvette or Ford Mustang? Vote and tell us what you like or dislike about them