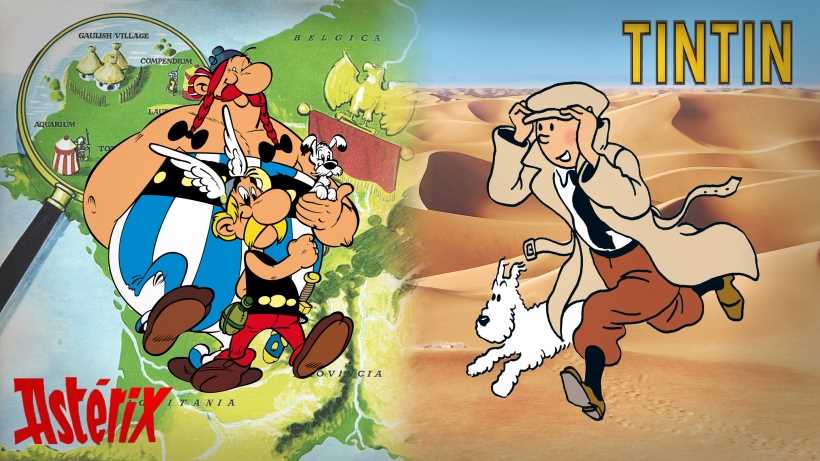 Asterix and Tintin are arguably the most charming European comics series. Vote in our poll and tell us which one you prefer.

On netivist we discuss American comic-books, Japanese manga, but of course we also like European comics. Astérix and Tintin are two iconic comic series that are part of the memories of youth of millions. Their authors, Hergé, Goscinny and Uderzo, are among the best comics authors in history. These intelligent bandes dessinées have managed to captivate both children and adults alike.

Asterix is a comics series of French comics written by René Goscinny (1926-1977) and illustrated by Albert Uderzo (1927-  ) first appeared in the Franco-Belgian magazine Pilote on 29 October 1959. Thirty five volumes have been released since its appearance. Asterix narrates the adventures of the Gauls Asterix, and his companion Obelix, during the time of Roman occupation. This humor and satirical comic series has been translated to over a hundred languages, sold over 325 million copies and has inspired in animated and action live films as well as a theme park.

Tintin is a comics series created by the Belgian cartoonist Georges Remi, "Hergé" (1907-1983) which first appeared in 1929 in a youth supplement to the Belgian newspaper Le Vingtième Siècle. This series narrates the adventures of the young journalist Tintin who travels around the world with his dog Snowy (or "Milou" in the French original edition) solving mysteries. As in the case of Asterix, Tintin comics are humorous and often include sophisticated satire and political or cultural commentary. Tintin has also been adapted to films and theatre, it has been translated to over 70 languages and sold more than 200 million copies.

Both series are extremely successful but they also have very distinct stories, type of humor and drawings styles.

Which of the two do you find more charming: Asterix or Tintin? Vote in our poll and tell us about any particular Asterix or Tintin adventures that you love.
Links:
Belgian or Swiss: who are the chocolate champions?  Best of Dragon Ball  Paris vs London