Attack on Titan vs Naruto - which manga and anime series is better? 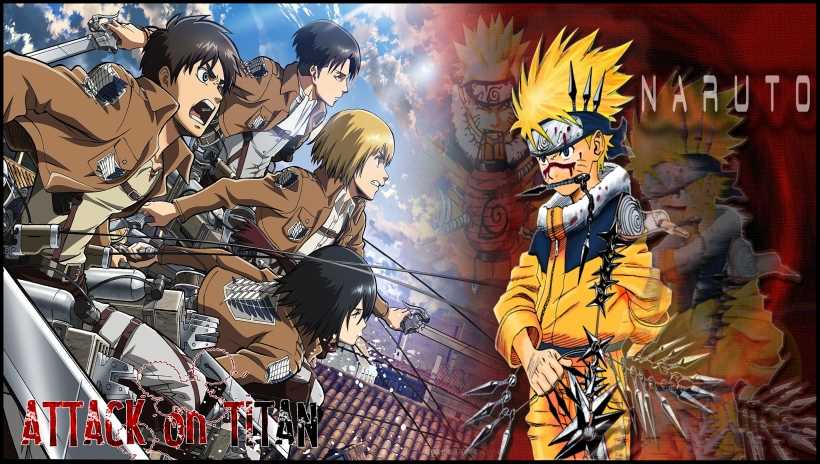 Attack on Titan vs Naruto. Two of the best Japanese manga and anime series with interesting characters and full of action. Which one do you prefer? Vote!

Attack on Titan vs Naruto

Attack on Titan  and Naruto are two of the most iconic action manga and anime series today. Naruto has a longer history but Attack on Titan has been an instant success. Both series have a legion of followers. Surely if you have been to comics or manga conventions you have crossed many of them dressed up as some of the best Naruto or Attack on Titan characters.

Naruto (ナルト) first appeared in a one-shot ninja-themed manga by Masashi Kishimoto in 1997. Naruto narrates the story of Naruto Uzumaki, a young ninja who dreams of becoming the Hokage, the strongest and bravest ninja in his village, Konoha. In fact Naruto hosts the spirit of the Nine-Tails, a powerful fox who attacked Konoha when he was a newborn. Naruto undergoes missions and exams in order to advance in the Ninja ranks. He encounters many legendary ninjas, makes friends and fight criminal organizations. Itachi, Sasuke, Kakashi and Gaara are some of the best known characters populating Naruto's universe. The original manga series has 72 volumes, and Naruto anime run from 2002 to 2007 (220 episodes) and was followed by Naruto Shippuden which continues to be produced and has now more than 440 episodes. Dozens of Naruto videogames have also appeared within different series: Naruto: Ultimate Ninja, Naruto: Uzumaki Chronicles, Naruto: Path of the Ninja, Naruto: Ninja Destiny, Naruto: Ninja Council, and Naruto: Clash of Ninja.

Attack on Titan (進撃の巨人, Shingeki no Kyojin) is a sci-fi manga series written and illustrated by Hajime Isayama. Shingeki no Kyojin was first published on 2009. The 18 volumes (so far) of Attack on Titan tell the story of the human civilization 100 years after being almost completely wiped out of the face of Earth by a misterous race of humanoid Titans. All humans live in an area protected by three huge concentric walls (called Maria, Rose and Sina). However, suddenly the Titans manage to break into it causing chaos and famine. The military which are divided into three branches (Survey Corps, Garrison Regiment and Military Police Brigade) try desperatedly to defend the civilization from the huge man-eating Titans. Eren Yeager, Mikasa Ackerman and Armin Arlert are three young military cadets which will end up having a extraordinary relevance in this epic fight for the survival of humanity. This dark fantasy, post-apocalyptic manga became highly popular very quickly and spawned a very famous anime series, novels, videogames and even a live-action mini-series . The anime adaptation has been praised by the public and press alike and won several Anime Awards.

Naruto and Attack on Titan are very different but compete to be the most popular manga and anime series today. Which of the two do you prefer? The dark sci-fi reinterpretation of a post-apocalyptic world populated by crazy human-eating giants or the most optimistic action ninja saga? The tormented Eren or the boisterous Naruto? The steam punk equipment or the special ninja techniques of combat? Vote and tell us why (below)

If you like these series, here you can find some recommendations about other animes you may also want to consider:

Help us collect a more extensive list of anime recommendations. Please add some more to the discussion forum below and let us know why Nartuto or Attack on Titan fans would like these series.

Attack on Titan vs Naruto - which manga and anime series is better? Vote here and tell us why! Invite others to join our poll and discussion!


Attack on Titan vs Naruto - which manga and anime series is better?