Best chocolate in the world. Swiss or Belgians: who are the true chocolate champions? 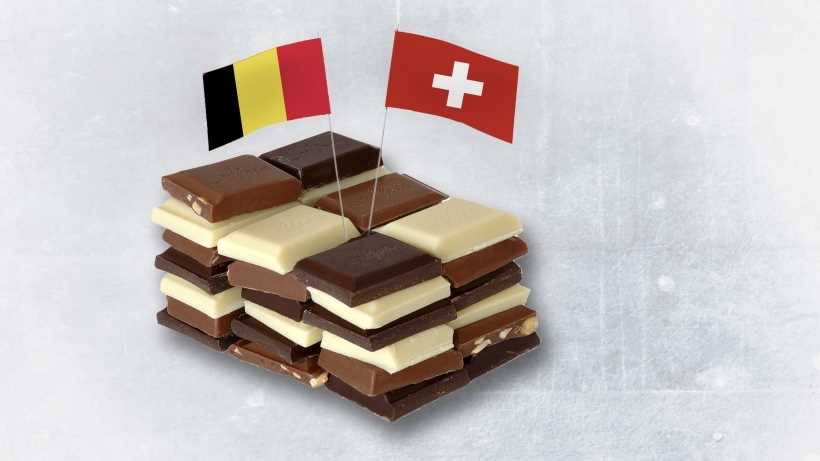 Source: Composite by G_marius based on an André Karwath's image

Swiss chocolate or Belgian chocolate? Which is the best? We discuss the differences and virtues of the most famous chocolates in the world.

Chocolate is a guilty pleassure made of the mass of roasted cocoa beans and cocoa butter processed with powdered sugar. This sweet is hundreds of years old. The word cocoa derives from the Aztec word "cacahualtl". According to the legend the cocoa was the most beautiful tree in the Aztecs' paradise. They believed the cocoa beans provided wisdom and helped cure diseases. These trees originaly grew in the Amazon and Orinoco basins. The Mayans started to cultivate cocoa more than 2,500 years ago. They used the cream of cocoa to cure wounds and as both stimulant and relaxing medicine. They also created a bitter beverage called "chocolha" with the seeds of cocoa and some local spicies which was only consumed by the nobles.

In 1502 Columbus received cocoa beans as an offering from the Aztec society, but it was the conquistador Hernan Cortes who sent the first shipment of cocoa to Spain in 1524. Spanish monks adapted the "chocolha" to the European taste, substituting some of the spicies used in America for honey, sugar and milk. In the Spanish court this beverage was kept as a secret recipe that only monks knew how to prepare.

In France it was introduced from Spain in 1615, when infanta Anne of Austria, showed the chocolate drink to her new husband, the King Louis XIII. In Belgium, the Low Countries back then, the production of chocolates started in 1635 under the Spansh occupation. In 1657 a Frenchman living in London opened “The Coffee Mill and Tobacco Roll“, a shop which sold the first tablets of solid chocolate, that were used to prepare this new drink. Chocolate became so popular that the British government taxed it heavily to the extent that chocolate had a price which was equivalent to two thirds of its weight in gold. Switzerland started to produce chocolate in the middle of the XIX century.

Today, the main cocoa producers in the world are Ivory Coast, Ghana and Indonesia. Other significant producers are Nigeria, Cameroon and Brazil.

Best chocolate in the world?

There are two nations that have become worldwide famous for their chocolate: Switzerland and Belgium. Swiss chocolates and Belgian chocolates have been exported around the world since the beginning of the twentieth century.

The Swiss came up with the idea to add cocoa butter and the method to do it which gave chocolate a much nicer texture. The Belgians invented the praline, the chocolate truffles and many different exotic fillings. There are several differences between Swiss and Belgian chocolates. The beans for Belgian chocolate come mainly from Africa. The Swiss acquire them from both Africa and Latin America. Texture, storage and the use of milk in chocolate are other distinctive features of these great chocolates. The Swiss chocolate has usually a smoother texture and would rather avoid using artificial emulsifiers. Swiss tend to produce milk chocolate, and in general they contain more sugar and less cocoa than Belgian chocolates, which are often dark. Belgian chocolatiers have a competitive advantage when it comes to pralines.

But these famous brands and big corporations are only part of an industry with a high range of producers, from artisan chocolate makers to mass production.

Do you think these two countries produce the best chocolate in the world or are they overrated? What do you think makes a chocolate excellent?

In case you are interested, we are also debating the best european and asian cuisine, the best chefs, dietary habits, and the best romantic gifts for her.

Who do you think makes the best chocolate in the world: the Swiss or the Belgians? Vote here and explain why.


Best chocolate in the world. Swiss or Belgians: who are the true chocolate champions?