Best gateway board game: the Settlers of Catan vs Carcassonne vs Ticket to Ride 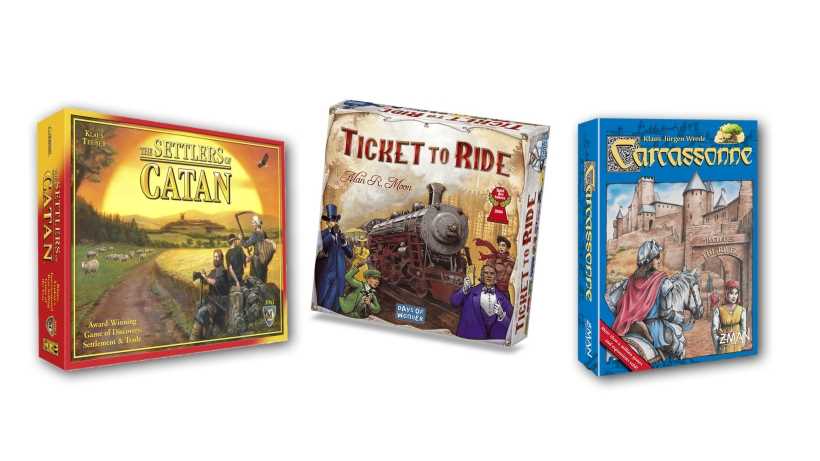 The Settlers of Catan, Carcassonne and Ticket to Ride are the best known gateway board games. Which of them do you prefer or brought you to the hobby?

These three competitive board games have introduced to the hobby of modern board gaming more people than any other game. Although you may now find more sophisticated mechanics in newer games, these three classics continue to be top sellers and source of inspiration for many game designers. The constant new expansions and adaptations of these games demonstrate their longlasting popularity.

The Settlers of Catan (Die Siedler von Catan) or Catan is a German game by Klaus Teuber first published by Franckh-Kosmos Verlag in 1995. Many attribute to this game the merit of having opened the era of modern board gaming. Catan is a game of civilization and negotiation. Players asume the role of settlers and need to manage their resources, trade, and make the settlements grow until they reach a certain number of points. This is the first German-style game which reach enormous popularity outside of Europe. It has won many awards, been translated to 30 languages, sold more than 18 million copies, adapted to video games.

Carcassonne is another German-style game designed by Klaus-Jürgen Wrede and first published by Hans im Glück in 2000. Carcassonne is an award winning game set in Southern medieval France in which players draw and place tiles representing cities, roads, cloisters and fields, and then use "followers" to score points. To this game we owe the term meeple coined to refer to these little wooden panted miniatures used in Carcassonne to represent the "followers". Million of copies of the original game, expansions, spin-offs and video games have been sold worldwide.

Finally, Ticket to Ride (2004) was created by the English designer Alan R. Moon and first published by the American publisher Days of Wonder. This train-themed eurogame has also won many awards, and sold several million of copies. It is also an easy game to teach to newcomers to board gaming. In Ticket to Ride players use train car cards and try to build routes between American cities to fulfill the unique secret objectives in their "destination tickets" cards. Players can enjoy many expansions, alternative maps and digital versions of Ticket to Ride.

Are you more into trading resources, placing tiles and meeples or connecting train routes? Do you like to demonstrate your negotiation skills, overcome luck with tactical choices, or surprise your opponents in the last moment? Which of these games is more fun or do you remember with more fondness? Which of the three you would recommend new players to bring to their board gaming tables?

Which is for you the best gateway board game: Settlers of Catan, Carcassonne or Ticket to Ride?  Vote below and tell us more about how you were introduced to the hobby or if there is another game that deserves to be shortlisted here.

Links:
Pandemic vs Arkham Horror  Is Hearthstone as much fun as Magic The Gathering?  Is crowdfunding good or bad?


Best gateway board game: the Settlers of Catan vs Carcassonne vs Ticket to Ride