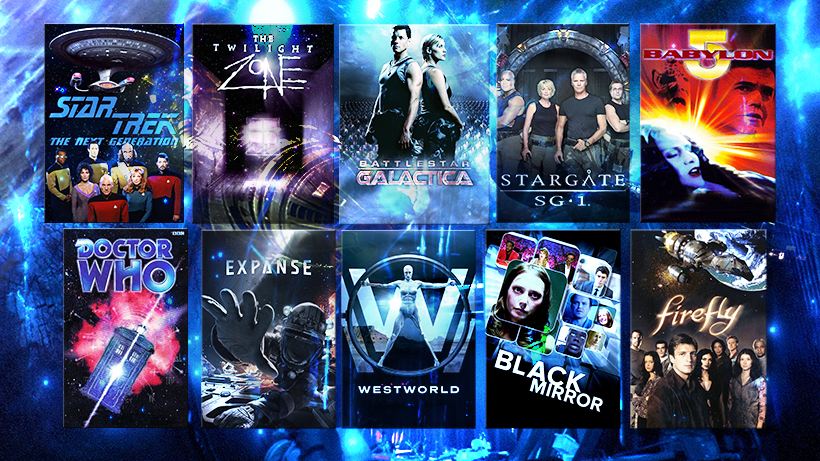 Find out more about the history of the science fiction genre. Check out our top 10 sci-fi TV shows and vote for the best one. Share your own top 10 ranking and the most memorable episodes. Which of these series do you think should be back or expanded?

Science fiction, usually shortened to sci-fi, is becoming increasingly popular in pop culture. This genre of speculative fiction captures and combines a variety of styles and topics including futuristic technology, space exploration, alternative realities, time travel, extraterrestrial life, and supernatural abilities. Alongside horror and fantasy, sci-fi has been considered traditionally a genre for geeks and nerds. However, the great success of books such as The War of Worlds, Dune, and Foundation; movies such as 2001: a Space Odyssey, Blade Runner and Star Wars, and video games such as Doom, Halo, and Mass Effect, have turned this genre into a mainstream phenomenon.

The origins of sci-fi are contested, but many attribute to the classic science/rfantasy books written in the 17th and 18th century, such as Johannes Kepler's Somnium, Francis Bacon´s New Atlantis, Cyrano de Bergerac's Comical History of the States and Empires of the Moon,  the inspiration for the first sci-fi authors. In the 19th century authors such as Mary Shelley, Jules Verne and H.G. Wells created very notorious stories based on fictional new technologies. The fascination of the technological revolution the world was undergoing made many people dream of the potential uses and powers of inventions to come. In the early 20th century, thanks to the pulp magazines, the genre grew considerably in the United States. Authors such as Hugo Gernsback, Edgar Rice Burrows, John Carter and Philip Francis Nowlan contributed to the dynamism and popularization of this literature. Later, excellent sci-fi authors such as, Isaac Asimov, Robert A. Heinlein, Arthur C. Clarke, Ray Bradbury, Philip K. Dick and Frank Herbert transformed the genre and achieved prestige among the public and critics. Many sub-genres such as cyberpunk, space opera, post-apocaliptic fiction, and alternate history appeared. Sci-fi expanded gradually to other cultural products, such as comic-books, cinema and, finally, TV.

Although science fiction first appeared on TV in the late 1930s, it became much more popular in the late 1950s thanks to the evolution of special effects and the advent of series such as Tales of Tomorrow and The Twilight Zone. In the 1960s sci-fi TV shows such as the Doctor Who and Star Trek helped to consolidate it. Ever since many other series have emerged and disappeared. Here we want to discuss the best sci-fi TV series ever created. We have shortlisted 10 of the most popular ones and would like you to vote and tell us which of them do you prefer and what are their major contributions to the genre.

To make decide which is the best sci-fi TV series, we have created a top 10 with the most popular series.

What do you think of our top 10 sci-fi TV shows? Is there any other memorable series that should have been shortlisted here? Star Trek vs Babylon 5 vs Battlestar Galactica vs The Expanse vs The Twilight Zone vs Black Mirror vs Firefly vs Westworld vs Doctor Who vs Stargate.

Which the best sci-fi TV series? Vote and tell us more about what makes them special and about your favorite episodes and moments in the history of science fiction on TV. Share your own top 10 on the comment section.