Femen protests: effective or counterproductive for feminism? Share you views 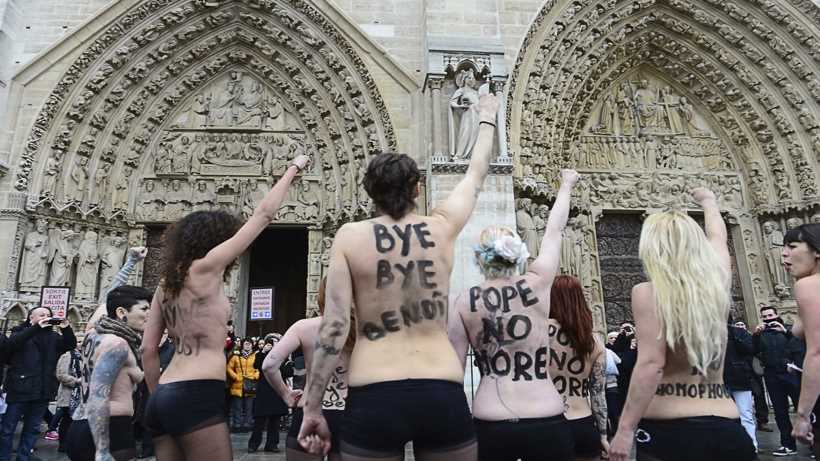 The topless protests of the feminist group Femen have generated contradicting views. We discuss the pros and cons of Femen approach to activism. Join!

Femen is a highly controversial feminist protest group founded in Ukraine in 2008 by a small group of students. They have taken the protests against gender discrimination to a whole new level. Their topless protests, and the slogans painted on their naked skin have granted them much international media attention since the inception of the movement. Due to media coverage, their protests have trancended the borders of Ukraine. Many branches are now active in countries such as the US, France, Brazil, Germany, Canada, Switzerland, Italy, Bulgaria, and Tunisia. The group has transferred its headquarters from Kiev to Paris, where they have a large membership.

Femen has undertaken many different kinds of campaigns. Their first one, which granted them popularity, aimed at raising awareness against sexual tourism and prostitution. They have also protested against religious institutions, sexism, homophobia, and authoritarianism. But the question is whether their actions can make a impact on policy change and people's attitudes.

It is undeniable that the images of half-naked Femen activists, such as Inna and Alexandra Shevchenko, have reached most corners of the globe. The media impact of this relatively small group of activists has been extraordinary. With their actions they have contributed to raise awareness about certain problems, such as the sex industry, abusive laws, and gender discrimination. Femen has also served as a loudspeaker for groups whose opinions have often been ignored by governments. However, some of their actions have backfired as in the case of a Femen activist who chainsawed a cross to protest against the incarceration of the members of Pussy Riot.

The criticisms to Femen have come not only from conservatives but also from the most progressive feminist camp. Religious and conservative people tend to find the nudity indecent and some of the claims by Femen activists, which have often opposed to religious dogmas and symbols, disrespectful. Femen protesters have been even called "sextremists" . Others simply argue that Femen actions are not effective, or that their actions contribute more to the fame of the lead activists than to the cause they intend to support. Moreover, some feminists find that Femen protesters by using their naked bodies as tools are objectifying themselves. The objectification of women is something feminism has been fighting against for decades.

Views are divided concerning Femen. Are these, usually young and pretty, activists really helping feminism with their actions? By objectifying themselves as means to attract the attention of the public are they succeeding in undermining the widespread sexual objectification women suffer in patriarchical societies? Can their bodies distract from the message they want to convey? Is the sexualisation of protests an effective tool?

Femen protests: effective or counterproductive for feminism? Vote here and share you views.


Femen protests: effective or counterproductive for feminism? Share you views