Should we rebel against the system with Flatpack Democracy? 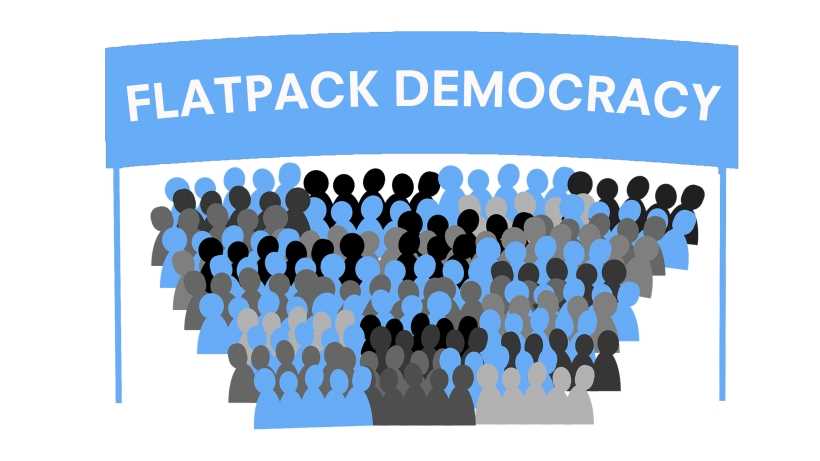 Flatpack Democracy is a bottom-up project to revitalize our political systems.  Should we embrace this revolution and bring power back to the local level?

Throughout Europe there has been a movement to revitalise democracy and bring it back to a citizen rather than a corporate base. Syriza in Greece was one manifestation of this as was the recent Spanish Elections that saw the success of anti establishment parties, such as Podemos, and coalitions, such as Ahora Madrid and Guanyem Barcelona. The crisis and social movements such as the "indignados" and "occupy" have demonstrated that there is a growing concern about participative and direct democracy and disillusionment with traditional party politics. Flatpack Democracy is proof that this wave of disenchantment has also reached the United Kingdom.

The results of the recent UK General Election show that many people are starting to withdraw support from the two big traditional political parties, which have always centralized power. The majoritarian electoral system (First Past the Post) has helped these parties to retain the large majority of MPs in the House of Commons. And yet Scotland made it clear that when there is a real alternative then people will desert the traditional parties. Many think our present party system is no longer fit for purpose and that we should get away from adversarial politics.

But, can politics be collaborative and directed at the common good?  In a very British way this happened in Frome in Somerset. At the local elections that accompanies the General Election, people in Frome rejected the parties they had normally supported and turned to the Independents for Frome (IfF) in droves. There was a feeling in Frome that mainstream politics fails to represent them or their concerns, a genuine fear we are becoming a less caring, less understanding, less tolerant Britain.

Building on their success in the last local election when they took control of the town council, a group of dedicated local people interested in promoting a responsive and responsible culture in their town instead of party political agendas gathered together under the banner of Independents for Frome, won a landslide victory taking every single town council seat in the election.

They followed the idea of “Flatpack Democracy” as expressed in John Harris’s article "How Flatpack Democracy beat the old parties in the People’s Republic of Frome." The key point is that a majority of Independents (and in Frome’s case an entire council) can be good for democracy in a way that even a small majority for an ideology led party will not be, because they can represent a full range of views, and they can focus on the issues people at community level care about. Their political manifesto has been now captured in Peter Macfadyen's book "Flatpack Democracy: A DIY guide to creating independent politics". Some of the most important goals this initiative is looking to achieve are:

A myriad of  questions emerge from the interesting Frome in Sommerset case: Is this a new beginning; an example of how local citizens can get together and work together in collaboration rather than follow the moribund party political agendas of old? Will this be the beginning of a new politics perhaps starting at a local level? Or will the initial enthusiasm fade as they face real decision making and descend into factions and new parties? Can they create a collaborative and deliberative framework for democracy that will last or will the old adversarial form of politics raise its head again? Can Flatpack Democracy satisfy the claims for a more participative and direct democracy and address some of the flaws of our system?

Should we rebel against the system with Flatpack Democracy?  Vote on our poll and tell us more about the pros and the cons of this project and whether you think it can be positive for our societies.


Should we rebel against the system with Flatpack Democracy?