Foie gras controversy: should it be banned due to the cruelty involved in its production? 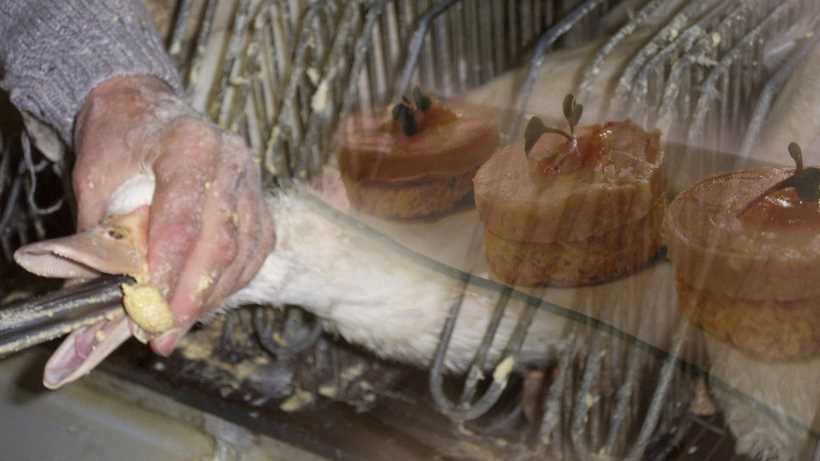 Source: Composite by G_marius based on Gaia's (Global Action in the Interest of Animals) and stu_spivack's images

Foie gras is a delicacy with a long history. Is the cruelty of the force-feeding process used in its production reason enough to ban foie gras?

Although France is the main producer and consumer of this luxury food, sold foie gras has a long history than can be traced back to ancient Egypt. The decoration in several tombs from the period of the Old Kingdom (2815–2400 BC) discovered near Cairo show some slaves fattening geese.  As early as 5th century BC Greek poet Cratinus wrote about geese-fatteners and later Horace, the Roman poet from the times of Augustus, describing a luxury banquet, referred to the liver of a white goose fattened with figs as important part of the menu. In Latin this delicacy became known as Jecur Ficatum. In fact, the word fig, Ficatum in Latin, becomes the etymological origin of the word foie (liver) in French. Thanks to the corn brought by the Spaniards from America the farming and fattening of ducks and geese grew in importance in Europe during the 16th century, in particular in the Basque Country and South West of France. The Jewish communities of central Europe who had transmitted through generations old Egyptian recipes also became well known for their capacity to produce this delicacy. It is with Louis XVI and the "pâté en croûte" recipe that foie gras acquires its greatest popularity.

Foie gras is a delicatessen made of the liver of a goose or a duck that has been specially fattened. The controversy emerges precisely from the fattening process. Usually foie gras requires fattening the goose or duck  by force-feeding it corn with a long feeding tube (20–30 cm). In French this process is called gavage. The food is forced into the esophagus by a funnel fitted within the tube. A traditional force feeding system would last about 45 to 60 seconds per animal. Modern systems using a pneumatic pump may speed up the operation to about 2 to 3 seconds per goose or duck. Geese are normally force-fed three times a day for around 17 days and ducks twice a day for about 12 days. As a result of this fattening process the liver swells to about 500g, 10 times its normal weight. This process can also cause injuries to the animal's esophagus and inflammation of the walls of the proventriculus, which in some ocasions may result in the death of the bird.

Although in France for the delicacy to be considered "foie gras" in legal terms the process above must be followed, in Spain and other countries it is now increasingly produced using arguably more ethical natural feeding techniques. These livers are smaller and some famous chefs and consumers think that the alternative methods of foie gras production alter the product. However, others find foie gras from naturally fed animals exquisite and as good a product as the traditional one.

The possibility to produce foie gras with considerable less animal suffering and the example of the ban of foie gras in California in 2012 have brought the topic to the attention of many pro-animal activists.

Many questions have emerged now: Should we "sacrifice" this human pleasure to prevent animal suffering? Is the prohibition of the traditional force-feeding method of production of foie gras an act against farmers' freedom and traditions? To what extent would it be hypocritical to just ban this product while other food products also entail animal cruelty in their production? Would a partial ban on certain types of foie gras be effective in preventing abuses?

Should foie gras be banned due to the cruelty involved in its production? Vote and tell us whether you like foie gras and what you think about its ban.


Foie gras controversy: should it be banned due to the cruelty involved in its production?