Who is the most evil leader in history? 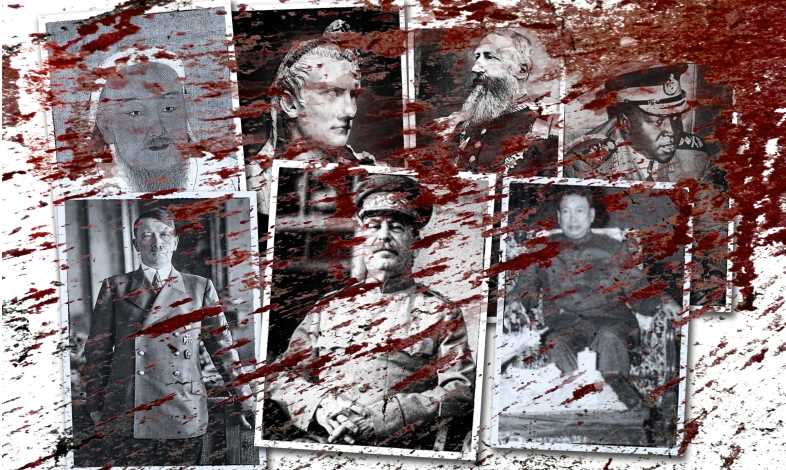 These men were ruthless, sadistic and murderous. Millions of people suffered and died because of them. But who among them is the most evil man in history?

We have shorlisted seven of the most evil world leaders in history. All of them committed attrocities and caused great harm directly and indirectly to many. These leaders were mentally deranged mass murderers. Most of them did not pay for their crimes. Join our discussion and help us decide which should be considered the most horrible of them.

Most evil men in history

Caligula was a Roman emperor for less than four years (AD 37–41). However his brutality and sadism gained him a place as one of the most evil leaders in history. Caligula was  renowned for his extravagant life excessive spending. According to historians 160,000 animals were sacrificed in his honour just in the first three months of his reigns. He used torture and assassination as entertainment. During his rule he often got people fed to animals, forced to commit suicide, or starved to death. Decapitations, executions of children, mutilations, and acts of sexual depravity were Caligula’s trademark. Suetonius and Cassius Dio narrated the emperor madness and cruelty. Caligula was assassinated.

Genghis Khan was the ruler of the Mongolian Empire from 1206 to 1227. He was feared for his cruelty and genocidal military campaigns. For instance it is estimated that between 10 and 15 million people died due to his invasion of the Iranian Plateau. Cities were burnt or completely destroyed, and populations massacred. Those who confronted Genghis Khan were enslaved, raped, tortured and suffered horrible executions. It is claimed that his armies may have overall caused the death of 20 to 60 million people in total, this is 10% to 30% of the estimated global population at the time. Genghis died in 1227 of natural causes.

Leopold II was king of Belgium from 1865 to 1909. King Leopold is responsible for the exploitation of the natural resources and the death of millions in Central Africa. Leopold named his privately controlled colony Congo Free State. Many Congolese were forced into slavery, in particular in the rubber industry. Failure to meet rubber collection quotas were punished with mutilations and death. Historians estimate from two to fifteen millions the number of deaths associated to his reign in Congo. Roughly half of the population perished during the period of the Congo Free State (1885—1908). His atrocities inspired Joseph Conrad’s Heart of Darkness. Leopold died in 1909 of natural causes.

Adolf Hitler was the Chancellor and Führer of Nazi Germany (1933—1945). He has been often considered the most evil leader because he initiated the bloodiest war in history, the Second World War which costed more than 60 million lives. Hitler was a xenophobic, racist and ultra-nationalist leader who oredered the Holocaust, the systematic assassination of 11 million civilians, among which 6 million Jews. Hitler was a megalomaniac and wanted to achieve world domination. The totalitaran Nazi regime that he designed prosecuted and exterminated any political opposition, homosexuals, handicapped people and some ethnic groups. All sort of atrocities were committed by the German armies and security forces, including the use of force labour and concentration camps, extrajudicial executions, and human experiments.Adolph Hitler committed suicide in 1945 as Germany lost the Second World War.

Joseph Stalin was the leader of the USSR from from 1922 until 1952. He turned the revolutionary Soviet Union in a totalitarian communist regime where any sign of dissent could be punished with death. In the 1930s Stalin ordered the Great Purge in which millions of those suspected "enemies" of the regime were deported, imprisoned, tortured, exiled, and or executed. Stalin was paranoid and vengeful. He commanded the death of many of his close collaborators and former colleagues. Stalin also forced huge population transfers among differnt republics. Under his rule, millions died of famine or after being forced to work in concentration camps or "gulags".Between 20 million and 60 million deaths have been directly or indirectly attributed to Stalin. Stalin died in 1953 of natural causes.

Pol Pot was a Cambodian leader who led the Khemer Rough revolutionary group and the Prime Minister of Cambodia from 1976 to 1979. Pol pot established a Communist totalitarian dictatorship which evacuated cities and forced millions to work in collective farms in the countryside. It is estimated that between 1 and 3 million people, approximately a fourth of the Cambodian population, perished due to summary executions, forced labour, malnutrition and insufficient medical assistance during Pol Pot’s regime. People were very often tortured, hanged, buried alive, and clubbed to death. Pol Pot died in 1998 of natural causes.

Idi Amin was the dictator of Uganda from 1971 to 1979. He took power through a military coup. His rule was criticized by the systematic repression, human right abuses, corruption, extrajudicial executions and ethnic cleansing. Amin is considered one of the most sadistic leaders in history. He tortured and killed thousands of people. Amin broadcasted executions, mutilated people, and has been accused of eating human flesh and drink blood of his victims. It is estimated than 100,000 to 500,000 died as a consequence of his regime. Idi Amin died in 2003 of natural causes.

Who is the most evil leader in history: Caligula, Genghis Khan, Leopold II, Hitler, Stalin, Pol Pot or Idi Amin? Vote and explain your choice. Share the actions and motives that you find particularly repugnant. Tell about other evil men that should be in the list.


Who is the most evil leader in history?