Pele vs Maradona: who is the best football player ever? 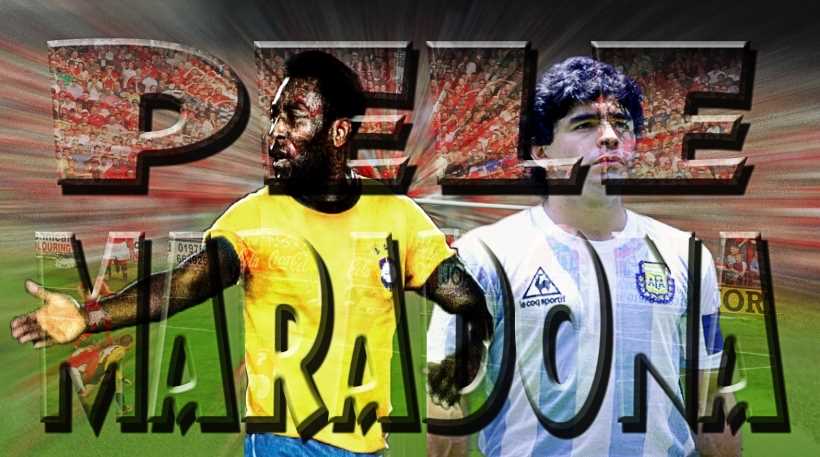 Pele and Maradona are two of the most iconic football players. They also capture the Brazil vs Argentina rivalry. But who deserves to be considered the best football player ever?

There has been a longstanding debate over who was the best player in the history of football (soccer). The Brazilian Edson Arantes do Nascimento, better known as Pele, and the Argentinian Diego Armando Maradona have both been described as the world's greatest footballers. Dribbling skill, speed, game vision, goal scoring ability, charisma and courage: these football geniuses excelled in all of them, however Pele and Maradona had overall very distinct playing styles. Moreover they helped their countries, Brazil and Argentina, reach the ultimate football glory, the World Cup - an achievement that neither Messi or Ronaldo have managed so far.

The "King of Football" or "o rei" was born on 23 October 1940 in Três Corações, Minas Gerais, Brazil. He grew up in poverty near São Paulo. He had to work from early age and could not afford to buy a proper football. He played for some amateur teams including the Bauru Athletic Club, with which he won three consecutive São Paulo state youth championships. He also competed in indoor football playing with the local team Radium. His coach at the time Waldemar de Brito brought him to a trial at Santos FC in 1956, he impressed the club and signed his first contract. At the age of 15, in his debut game he scored his first goal in a senior team. This was only the first of his record of 1281 goals in 1363 games.

In 1957, he bacame a regular in Santos FC starting squad and the top scorer in the league. Pele played his first international game against Argentina, losing 2-1 in July. He scored Brazil's goal and become the youngest ever player to score in an international match. Next year, he helped Santos to win the Campeonato Paulista, with 58 goals, and Brazil win the FIFA World Cup. He repeated victory in the World Cup in 1962.

For the following years Pele played as no other player has done it before. By 1969, he had already scored 1000 goals. Next year he won again the World Cup and he was chosen as the best player of the tournament after scoring 14 times. Pele retired from Brazil's squad in 1971 and moved to New York Cosmos in 1976, leading the team to 1977 North American Soccer League championship in 1977. Pele retired in 1977, but his public life continued becoming a UN ambassador for the environment in 1992 and a UNESCO Goodwill ambassador in 1995.

Diego Armando Maradona was born on 30 October 1960 in Villa Fiorito, Buenos Aires. He was an attacking midfielder considered for many the best number 10 in history. He was the fifth of eight children and, like Pele, he grew up in a poor environment. The football he received as a gift at age 3 changed his life. At 10 he joined the youth team of Argentina Juniors and led it to a 136-game unbeaten streak. Maradona was only 15 years old when he started his professional career in 1976.

Although he was a midfielder, Maradona scored 116 goals in 166 appearances with Argentinos Juniors. In 1977 he played his first international game against Hungary. In 1979, he helped Argentina team to win the FIFA U-20 World Cup. Unlike Pele, who played most of his professional career in one team, Maradona played in several professional Clubs. In 1981, he was transferred to Boca Juniors and won the Argentinian league Championship.

In 1982, Maradona moved to Europe and played for Barcelona FC for two seasons, where he scored 38 goals in 58 appearances.He suffered an injury and following a dispute with the club president he was transferred to Napoli. Maradona's contribution to the Italian club was impressive. Thanks to him, Napoli became one of the best clubs in the world, winning the Italian Serie A in 1987 and 1990, the Coppa Italia in 1987, and the UEFA Cup in 1989. He became also the top scorer in Italy in 1987-1988.

Additionally Maradona led Argentina to 1986 FIFA World Cup victory. He gave 5 assists and scored 5 goals including one of the most beautiful goals in the World Cup history and the (in)famous "hand of God" goal against England. In 1990, Maradona reached the World Cup final again but could not lift the trophy. That moment marked the turning point and beginning of the decline of his career.

After a 15-month suspension for testing positive on cocaine, Maradona left Napoli in 1992. He played one year in Sevilla and then was transferred to Newell's Old Boys back in Argentina. In 1995 Maradona returned to Boca Juniors and played with the club two more years before retiring. Maradona is still closely connected with the world of football and from 2008 to 2010 he acted as coach of the Argentinian National team. Despite some bitter moments in Maradona's trajectory, the fantasy passes, dribbling actions and goals of the Argentinian genius will never be forgotten.

Check out these videos with the best of Pele and Maradona

Pele or Maradona: who is the best football player?  Vote and let us know why you think Pele or Maradona deserved to be considered the ultimate player. Thanks for sharing our debate with other football / soccer fans.


Pele vs Maradona: who is the best football player ever?