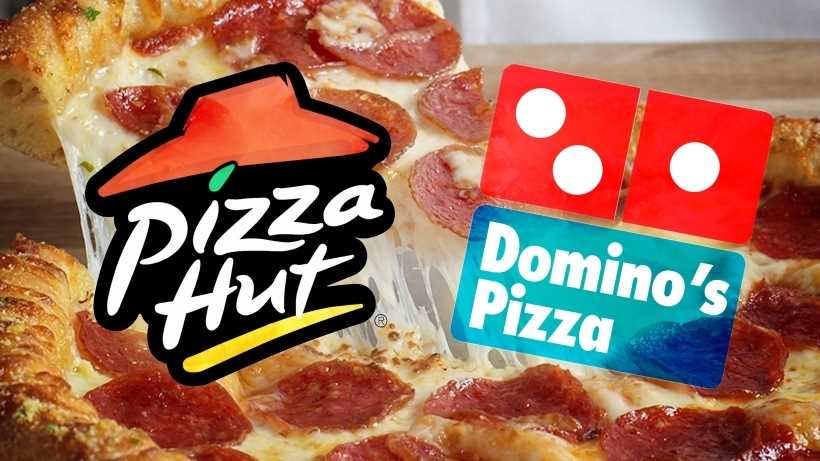 American Pizza showdown: Pizza Hut vs Domino's Pizza. We debate which of these two restaurant chains is the people's preferred choice. Vote & tell us why.

Pizza Hut and Domino's Pizza are the two largest chains of Pizza restaurants. Although both chains were born in the USA they now have thousands of stores worldwide. Each of the two has a loyal customer base. Theirs is becoming one of the the biggest rivalries in the food industry, equivalent to those between McDonalds and Burger King, or Coca-Cola and Pepsi. Pick a side in the pizza battle!

Pizza Hut is the oldest of the two companies. It was founded in 1958 by two Wichita State University students, Frank and Dan Carney. They were considering a career in Electrical Engineering, but since pizza was not very known in Wichita (Kansas) at that time. Frank and Dan saw a business opportunity, borrowed $600 from their mother and opened their very first restaurant in a small building that looked like a hut and which sign had only space for 9 letters, so they called it Pizza Hut. The business went well and quickly expanded all over the country, and internationally. Now the company is part of Yum! Brands (also owner of KFC and Taco Bell). Pizza Hut has more than 11,000 restaurants and 160,000 employees in the world.

Domino’s Pizza also started as a family story. In 1960, Tom Monaghan and his brother, James, purchase "DomiNick's" a pizza store in Ypsilanti, Michigan, borrowing $900 to acquire the store. A year later, Tom bought his brother's share of the company. In 1965 Tom renamed it Domino’s Pizza. The business grew quickly, and after opening many new stores in the USA, Domino's first restaurant abroad was opened in Winnipeg, Canada. The company is the second-largest pizza chain in the USA (after Pizza Hut) but the number one worldwide, with more than 10,000 restaurants and 220,000 employees in 70 countries. It’s a public company registered at the New York Stock Exchange.

Many criticize these restaurants but they have been undeniably popular and have become a favorite pizza chain for millions around the world. Why? What is their recipe for success? Are they really that different? If you would have to choose one of them which one would it be?

Pizza wars - Pizza Hut vs Domino's Pizza: which is better? Vote and share your views on make one of these restaurants chain superior to the other one.