Sartre or Camus: which of these French existentialist writers and philosophers inspires you the most? 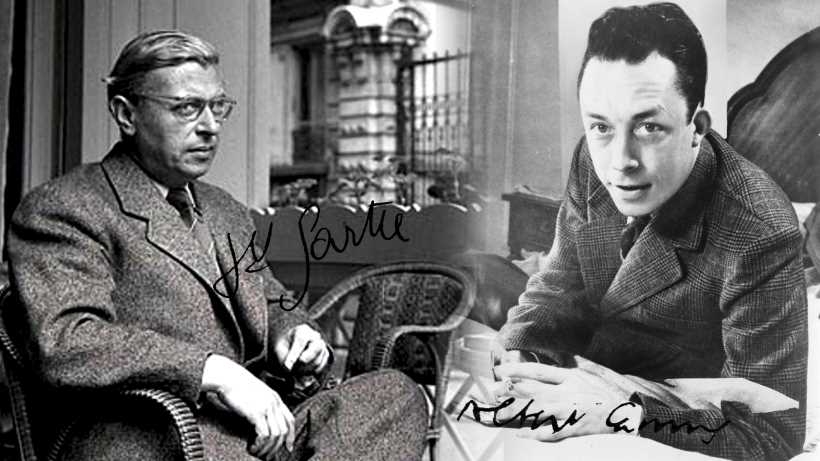 Two of the greatest philosophers of the twentieth century: Sartre and Camus. But which of the two French existentialist writers do you find more inspiring?

The Second World War produced catastrophic consequences that went beyond the material realm and reached even the field of philosophy. The war shook many of the foundations of human thought. Many philosophers were doubtful, anxious and intrinsically uncertain of the future of thinking. How to accept that mankind has been able to plan and execute horrendous crimes, the genocides and the death of more than 50 millions people all over the world? Philosophy as a discipline came under public scrutiny for not having been able to provide strong explanations about why all those atrocities had taken place.  In 1950s Paris, philosophical concerns assumed centre stage. Many French philosophers tried to make sense of what had happended a few years earlier and embraced existentialism. Among them, two figures emerged as best incarnating the “spirit of the times”, and representing distinct streams of thought: Sartre and Camus.

Jean-Paul Sartre was a brilliant and highly successful intellectual. His academic achievements were outstanding and he was the best known French philosopher of his time. He was a Marxist and was involved in a number of political struggles, holding, in particular, a very active anti-colonialist position. His support of Stalinism became highly controversial. One of his most famous idea lies in existentialism and his philosophical proposition “existence precedes essence”, meaning that the individual exists first in itself and then as a subject in the world. In other words, we are our own masters and responsible for our actions and our destiny. Sartre enjoyed great media exposure, and embodied a kind of tutelary figure in French and European literature. He had a life-long relationship with Simone de Beauvoir, a pioneer feminist essayist. "The Age of the Reason" and "Nausea" were two of Sartre's most famous novels. He was awarded the Nobel Prize for literature in 1964 but refused it, as he always did with official honors.

Albert Camus was born and spent part of his youth in Algeria. This experience influenced his thought and works. Camus always expressed his love and admiration for this country and the Mediterranean sea. His book “Nuptials” captures very well this influence. Camus joined the resistance during the German occupation and worked as a journalist after the Second World War. Considered a hedonist, Camus always defended the importance of enjoying life and the centrality of immediateness. He developed a very humanist philosophical thinking, paying particular attention to the notion of the absurd and its acceptance. In “The Myth of Sisyphus”, Camus elaborates on the human condition, and describes how mankind is condemned to eternally push a rock up a mountain, and to repeat the process every time the rock falls down. Camus was also politically active and involved in the defense of the weakest. He joined the Communist Party but his relation with it remained ambivalent throughout his life. "The Stranger" and "The Plague" are two of his best known novels. Camus won the Nobel Prize of literature in 1957 and died in a car accident in 1960.

Sartre or Camus: which of these French existentialist writers and philosophers inspires you the most? Vote and tell us why


Sartre or Camus: which of these French existentialist writers and philosophers inspires you the most?