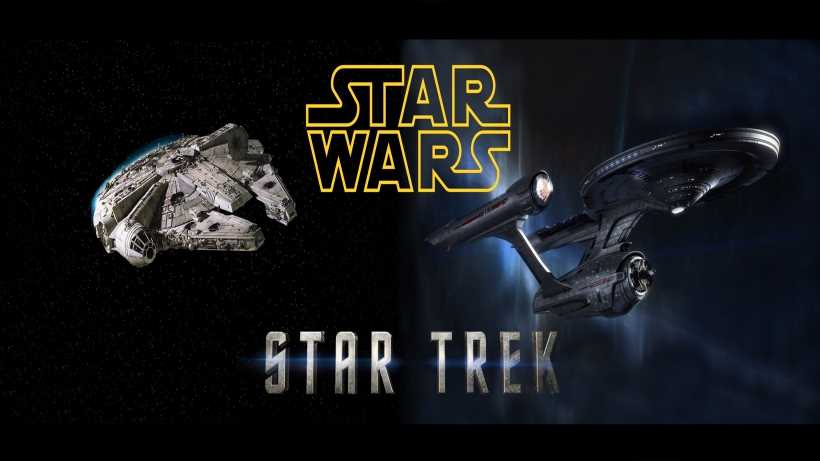 Star Trek and  Star Wars are the most influential sagas in the history of science fiction. Both sci-fi franchises successfully created rich universes which have inspired multitudes of books, video games, toys, and TV series. We compare the two and select a few of the best quotes the characters of these sagas left us.

Star Trek is a science fiction franchise created by Gene Roddenberry. The Original Series was released in 1966 and ran for three seasons on NBC. Star Trek narrates the space exploration and interstellar adventures of James T. Kirk, Captain of the starship USS Enterprise, and its crew, which included Spock, Leonard McCoy, Montgomery Scott, Pavel Chekov, Nuota Uhura, and Hikaru Sulu among others. The Enterprise explored the galaxy on behalf of the "United Federation of Planets". They searched new life and civilization, and often fought the extraterrestrial Klingons. The series were so sucessful that several TV spin-off series were launched afterwards: Star Trek: The Next Generation, Star Trek: Deep Space Nine, Star Trek: Voyager, Star Trek: Enterprise and Star Trek: Discovery, and Star Trek: Pickard. Ten films were also produced from 1979 to 2002. In 2009, the film franchise underwent a relaunch with Star Trek, a prequel to the original series directed by JJ Abrams. A sequel to this film, Star Trek Into Darkness, followed in 2013 and new one Star Trek Beyond has been anounced to mark the 50th anniversary of the interestellar saga in 2016. The trekkies are surely delighted that their favorite characters will be back soon.

Star Wars is an epic sci-fi space opera franchise created by the film director and producer George Lucas. Star Wars Episode IV: A New Hope (1977) was the first movie of a trilogy that was completed with The Empire Strikes Back (1980) and Return of the Jedi (1983). Star Wars became a worldwide pop culture phenomenon. Iconic characters such as Luke Skywalker, Han Solo, Princess Leia, Yoda or Darth Vader have left a deep imprint on many of us. Some of the scenes and scenarios in the movies also stimulated our imagination, such as the Mos Eisley Cantina on Tatooine, the battle on the icy planet Hooth or the destruction of the Death Star. And what about its music? who doesn't recognize the fantastic John Williams soundtrack? A prequel trilogy was later released Episode I: The Phantom Menace (1999), Episode II: Attack of the Clones (2002), and Episode III: Revenge of the Sith (2005). The first movie of a third trilogy, Star Wars Episode VII: The Force Awakens was released 2015. It was followd by Star Wars: The Last Jedi (2017) and  Star Wars: The Rise of Skywalker (2019). As with the reboot of Star Trek, for this new Star Wars JJ Abrams was chosen director to bring back to the big screen some of the most glorious elements of George Lucas saga.

Some of the best scenes of Star Trek and Star Wars

Some of the best Star Trek quotes

Some of the best Star Wars quotes

Star Trek or Star Wars, which sci-fi universe is more interesting? Vote and explain why