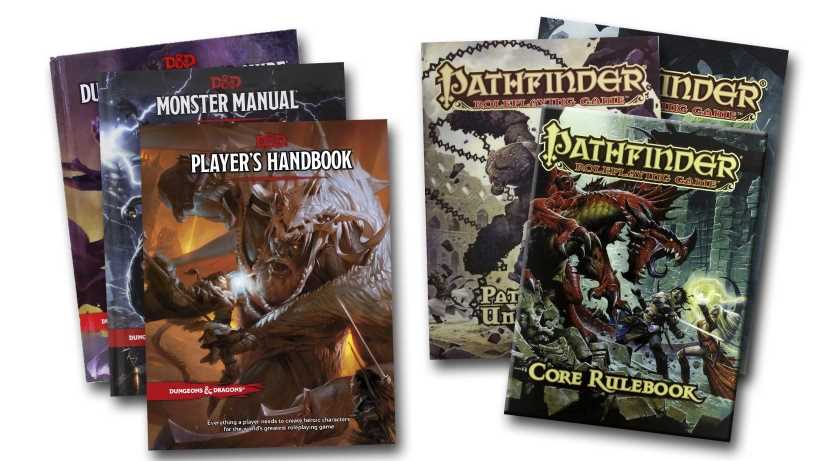 Is Dungeons and Dragons (fifth edition) superior to Pathfinder Roleplaying Game? Vote and find out which is the most popular fantasy tabletop RPG.

Who hasn't dreamed of becoming an elf, a barbarian or a dwarf exploring dungeons for treasures, fighting dragons, and questing across fantasy lands? A fantasy tabletop roleplaying game is probably the best way you can experience these dreams. Today tabletop rpg fans can choose among many different games and systems, but above them all, two games deserve special mention: Dungeons and Dragons and Pathfinder. D&D 5E as it is commonly called is launching lots of high quality expansions. Pathfinder is about to release its second edition. Which of the two will roleplay connoisseurs prefer in the end?

Dungeons and Dragons (D&D) is the mythical series of tabletop fantasy role-playing games that introduced and popularized the genre and paved the way for many fantasy book sagas, comic-books, cartoons, video games, and toys. D&D has evolved significantly since it was first released in 1974 by TSR. In 1977, the Advanced Dungeons & Dragons system introduced a more complex set of rules, many new creatures and spells. The second edition of AD&D was released in 1989, expanding further the rulebooks. In 2000 the 3rd edition of Dungeons and Dragons meant a major revision of the rules, a kind of reset for the series and the basis of what today is called the d20 system. Unfortunately the 4th edition, launched in 2008 by Wizards of the Coast, was heavily criticized by the fans of D&D, many of which continue to play older editions or move on to other tabletop rpgs such as Pathfinder. Wizards of the Coast reacted to these criticisms by releasing D&D 5th edition in 2014. This latest instalement of the popular franchise of fantasy tabletop rpgs, was developed partly through a process of public playtest. Many mechanics have been streamlined and the story has regained centrality in this game. Will this be enough for D&D to sit again on the throne of fantasy roleplaying games?

Pathfinder Roleplaying Game is a much younger game than its main competitor. This game published by Paizo Publishing in 2009 is an evolution of D&D version 3.5 (with which is backward-compatible). Pathfinder RPG quickly managed to attract many of the traditional D&D fans who had felt disappointed by the fourth edition of the game. Pathfinder main world Golarion, is also very much inspired by fantasy worlds such as Dragonlance's Krynn, Forgotten Realms or Middle-Earth. Thanks to its popularity, a series of fantasy novels, comic-books, a miniature game and a card games have been based in the Pathfinder universe. Although its system may be less elegant than the new D&D fifth edition, Pathfinder still offers roleplay gamers a more complete skill system and more options for character customization. Pathfinder Second Edition is on its way and it seems that it encourages more movement in combat and make magic items wondrous again.

In case you love medieval-style fantasy setting and want to explore alternatives to Dungeons & Dragons and Pathfinder, this is a list with some of the best tabletop rpgs you can play:

Dungeons & Dragons (fifth edition) vs Pathfinder: best fantasy roleplaying game? Vote and explain what do you like and dislike about them.