US-Cuba relations: is the normalization a victory for Cuban or for US diplomacy? 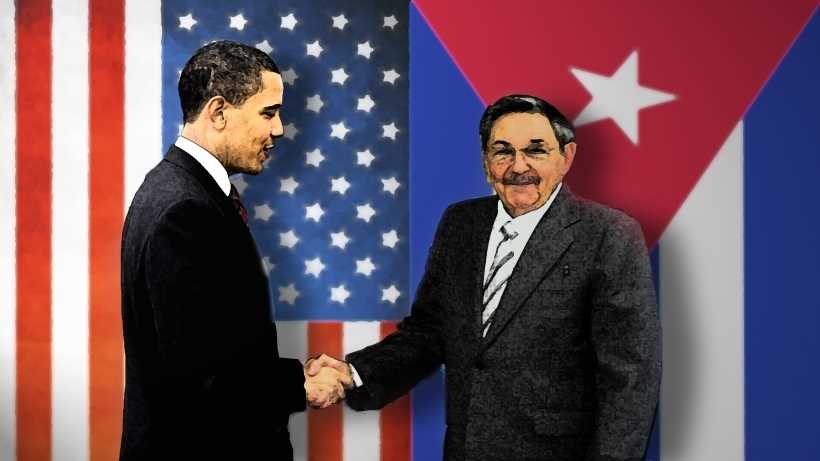 Source: Fictional composite by G_marius based on The Official White House Photostream's and unknown's images

The normalization of relations between the USA and Cuba is a historical landmark, but also a controversial decision. Is it a victory for the Cuban or American diplomacy?

A new era in Cuban-United States relations has just started. It seems that the power struggle is coming to an end. Cuba and the USA broke their diplomatic relations on January 3rd 1961, when the latter withdrew its ambassador to Havana and its recognition of the Cuban Revolutionary Government of Fidel Castro. The following year J.F. Kennedy established a commercial and financial embargo against Cuba which is still in operation today. Today Fidel is retired and Raul lead the country. In the US Barak Obama has also decided bring to an end this diplomatic stalemate.

On December 17 2014, President Barack Obama announced that after months of negotiations between American and Cuban officials, he had decided to reinstate diplomatic relations with Cuba. This meant the replacement of the strategy of isolation followed by the USA for more than 50 years by an engagement approach. Obama asked Secretary of State John Kerry to re-establish diplomatic relations with Cuba. The American embassy in Havana was opened again, and several other restrictions to the island where lifted, probably the embargo will be over soon.

On March 20 2016, Barack Obama initiated a three-day trip, the first visit of a US President to Cuba in 88 years. After the 1959 revolution no American President has set a foot on the Caribean island. This is supposed to be another step in the normalization of US-Cuba relations. Obama did not meet Fidel Castro, but his brother, the current Cuban President, Raul Castro. Nonetheless a crowd of Cubans cheered the US President and his wife Michelle Obama chanting: "Viva Obama, Viva Fidel!". Obama administration has asked the Castro regime to make sure human rights are respected in the island, to release political prisioners and to eliminate media censorship. Obama has publicly requested the US Congress to lift the embargo to Cuba.

Some analysts believe that this will be part of Obama's legacy and a boost for the USA image in Latin America and the world, conversely, others argue that Cuba has been the greater beneficiary of the agreement without any commitment on the grounds of promoting democracy or the respect for human rights in the island. For many this will just help legitimizing the regime.

There are many uncertainties about this new phase in US-Cuban relationship. What do you think about this move? Do you think this normalization of diplomatic relations with Cuba has been the right move for the US? Who will benefit the most from this agreement? Can this trully trigger a change in Cuba? Who will capitalize and benefit the most from the  normalization of relations Raul Castro or Barack Obama?

US-Cuba relations: is the normalization a victory for Cuban or for US diplomacy? Vote here and explain who and why is the ultimate winner in this process.


US-Cuba relations: is the normalization a victory for Cuban or for US diplomacy?