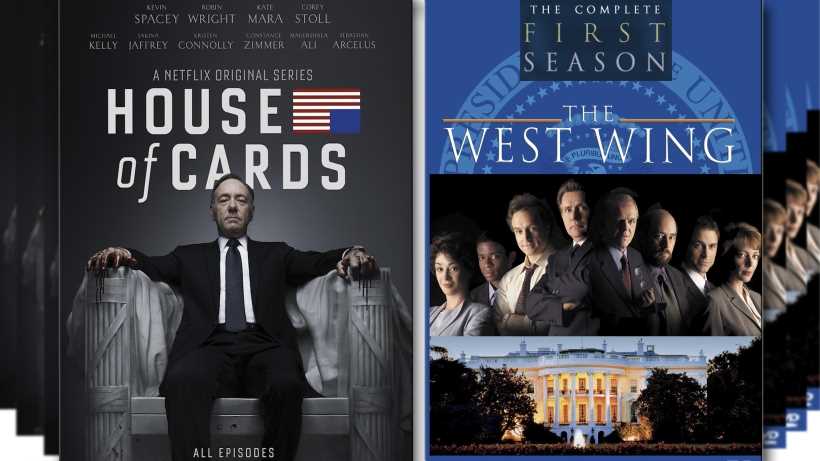 The West Wing and House of Cards deal with power and American politics in very different ways. We discuss which of the two is the best political TV series set in the White House. See our list with the 25 best fictional presidents

Everyone knows Frank Underwood and many of you probably also remember Josiah "Jeb" Bartlett. These are two of the best fictional presidents in the history of TV. Power, politicians, foreign affairs and presidential elections are extremely compelling topics often exploited in books, films and TV series. However, there are very few cases in which these topics have been tackled in such a profound, yet entertaining, way as in the two series we discuss here: House of Cards and The West Wing.

The West Wing vs House of Cards

The West Wing (NBC, 1999–2006) is the first extremely successful TV series that dealt with the issue of US presidency. As its name suggest, the series is set in the West Wing of the White House, where the senior staff of the president works and many important decisions are made. The Democratic President Josiah "Jed" Bartlet (Martin Sheen), the press secretary C.J. Cregg (Allison Janney), the communication director Toby Ziegler (Richard Schiff), and the Chief of Staff Leo McGarry (John Spencer) are some of the most interesting characters in this political TV show. The excellent acting and script combined to create a realistic portrait of Washington politics. The witty dialogues and interesting plots trademark of its creator, Aaron Sorkin (The Newsroom, The Social Network, and Steve Jobs), turned this White House TV series into a great success. In particular spectators with high levels of education and interest in politics and government affairs praised The West Wing as one of the most important TV achievements in the turn of the century. The series was sometimes criticized for being too "leftist" and for abusing the steadicam "walk-and-talk" long scenes, however, the reception by the critics was overwhelmingly positive. The West Wing won 26 Emmys and 3 Golden Globe Awards and its cast was voted the best series cast of all times by TV Guide.

After the West Wing, many thought it was impossible to make a better series about the US's highest-level politics. However, the Netflix Original series, House of Cards is changing many people's opinion on which is the best ever political drama in American TV. Since the entire first full season was released on 1 February 2013, the numbers of followers increased rapidly. The fifth season of House of Cards was launched on 30 May 2017. The two main characters of House of Cards: the machiavelian Democratic Congressman Frank Underwood (Kevin Spacey), and his supportive and similarly determined wife Claire Underwood (Robin Wright), have become veritable TV icons. House of Cards was created by Beau Willimon (Ides of March) and has been heavily influenced by the West Wing - some even criticized that the show is trying too hard to be a new West Wing. But overall, House of Cards adopts a much more pessimistic take on American politics. It focuses on Underwood 's plots and ruthless methods to advance his political career and win the presidential election. Most characters in the series are extremely pragmatic, ambitious, and unscrupulous. Despite its somewhat noir and charicaturesque depiction of politics, the fantastic performance and intriguing plots of the series have granted House of Cards the favor of the public and critics. The show has already won 6 Emmys, 3 Golden Globe Awards and a Peabody among several other recognitions. Millions are now fascinated by this fictional evil american president and his wife. The allegations of sex abuse against Kevin Spacey may put an early end to his character in the series. However, it seems that one more season will be aired with Claire Underwood as the main star in the show.

The 25 best fictional presidents in TV and movies

Clearly House of Cards and The West Wing are two fascinating series which will continue to be compared for years. They are among the best series in American TV history. Let's discuss here what we like and dislike about them - Jed Bartlet or Francis Underwood, Martin Sheen or Kevin Spacey? Are you fascinated or alienated by the evil people that plague House of Cards? Is realism the most valuable feature in a political TV drama?

Best political series: West Wing or House of Cards? Vote and tell us more about your favorite fictional president and scenes in these series. Please invite other fans of political fiction to join our discussion and poll