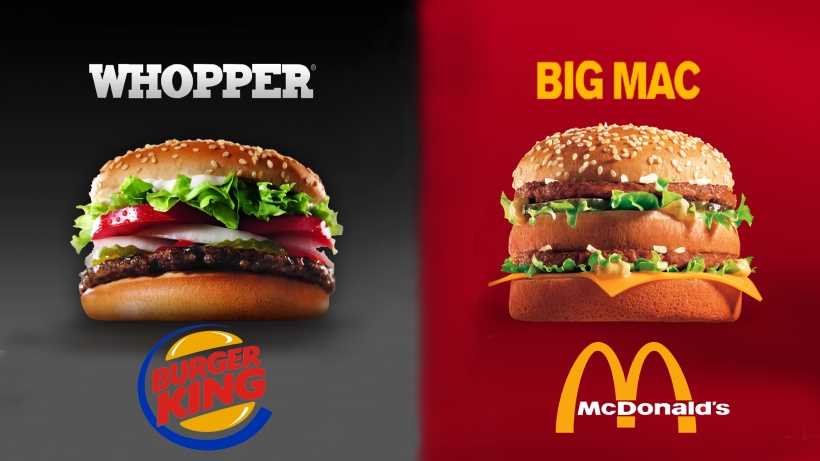 We debate which hamburger is better and tastier: Burger King's Whopper vs McDonald's Big Mac. Join our debate on the most famous signature hamburgers in the world.

Burger King's and McDonald’s hamburgers probably won't compete for the title of “best burger in the world”, but both franchises have definitively conquered the planet.

Mc Donald’s has more than 36,525 outlets in 119 countries. This means you can go and have a Big Mac pretty much anywhere in the world. With 14,933 restaurants located in 76 different countries, Burger King has a slightly smaller worldwide presence, but it is still an impressive international success.

Both companies, and other fast foods brands, use corporate standards to prepare their menus. That way any customer in the world knows he will eat the same Big Mac in Shanghai, in Paris or in New York, or the same Whopper in Madrid, Tokyo or Los Angeles, a characteristic which is often appreciated by tourists.

The Burger King vs McDonald's rivalry

The rivalry between the two brands is similar to other business competitions such as Nike vs Adidas, Android vs iOS, or in the food industry Pizza Hut vs Domino's Pizza rivalry. In the late 1970s, in an attempt to gain market share, Burger King started what have been called since then the Burger Wars. The conflict consisted of mutually-targeted advertisements: McDonald’s vs Burger King, and vice versa. Other brands fast food brands got involved. Companies cut prices and spent so much money in marketing that it negatively affected their finances - Burger King and Wendy’s were severly hit. McDonald’s won the war and kept growing. In the 2010s, in a slow economy, some observers claim that the Burger Wars have returned.

Decades after their creation, the Whopper and Big Mac continue to be the most iconic hamburgers. Millions of them are consumed daily worldwide.

The Whopper is ten years older than the Big Mac. It was introduced in 1957 by Burger King co-founder James McLamore and originally sold for 37¢.  It consists of a flame grilled quarter-pound (113.4 g) beef patty, sesame seed bun, mayonnaise, lettuce, tomato, pickles, ketchup, sliced onion and cheese. Although slightly more expensive than Big Mac, the Whopper is also bigger.

The Big Mac debuted at Delligatti's Uniontown, Pennsylvania restaurant in 1967, selling for 45¢. The Big Mac has a 3-piece bun. The middle bun separates the two 1.6 oz (45.4 g) beef patties. Other ingredients in the Big Mac include a very special secret sauce, cheese, lettuce, minced onions, and pickles. The middle piece bun and in particular the famous secret sauce made of mayonnaise, mustard, vinegar, sweet pickle relish, paprika, garlic and powder has made of the Big Mac most popular hamburger on Earth.

Selling more does not always mean tasting better. Which of the two deserves to be considered the number one? Which of them has the better meat? Is either of these the best burger ever?

Burger wars: Whopper vs Bic Mac. Which burger taste better?​ Vote here and tell us what you like about them and which other hamburgers are comparable to the big two. What do you think is the best burger in the world?