Giuseppe Verdi or Richard Wagner: the virtuosity of the Italian maestro or the power of the German genius? 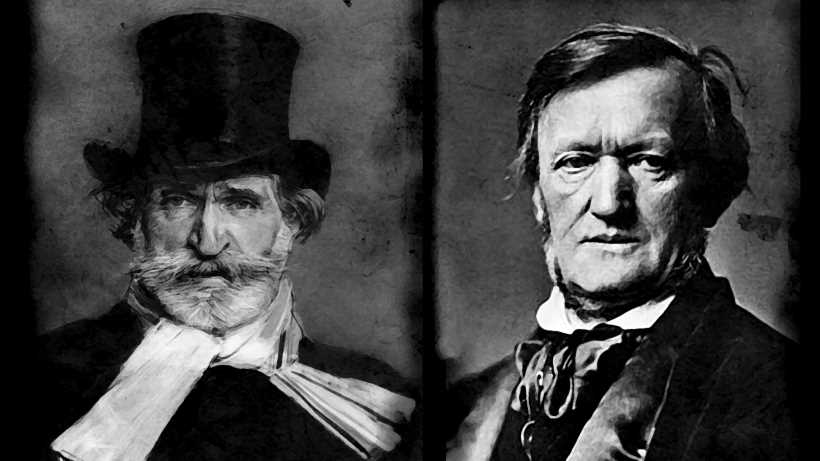 Do you prefer the Italian tragic and fated love stories, or epic tales found in Northern myths? Do you like rather Verdi’s dramaturgy and beauty of the singing or Wagner's cold bravery meshed in an entire “total art” system?

Born in the same year (1813) Verdi and Wagner profoundly marked the artistic life in the 19th century. Although they shared a similar understanding of dramaturgy and performance, Verdi and Wagner reshaped the lyric art in their own ways and joined the selected club of the most influential composers in the history of music.

Giuseppe Verdi (1813 – 1901) is one of the most famous Italian opera composers, with pieces such as Aida, La Traviata, Nabucco, Rigoletto… He is known for having re-shuffled traditional opera codes of the times, introducing a stronger than ever story-telling component. He also focused on the continuity of the whole piece rather than on successive “numeros”, that is a succession of virtuous singing and recitative declamations. To some extent, Giuseppe Verdi invented Hollywood before time, as he mastered the art of building a story and playing with all senses and emotions of the audience. He is now a tutelary figure for every Italian, as he greatly embodies the late 19th century struggles for Italian unity.

Around the same period, Richard Wagner (1813 – 1883) went probably further in reinventing the genre conventions: he built up his own settings to comply with his desires and ambitions for his pieces. He wrote his librettos himself and even built a “Wagner-fitted” opera house in Bayreuth (Germany). Today the Bayreuth’s festival productions are booked about 10 years in advance! Wagner is almost a nihilist artist, who dealt with great mankind myths and had a predilection for Scandinavian mythology. “Der Ring des Nibelungen” is a 20 hours long piece (in four parts), extracted from the same legend that inspired "The Lord of the Rings”. Richard Wagner is a genius of opera art, and managed to mesh music, theatre, plastic arts, philosophy, and literature in a sole piece.

What do you value the most: the brilliancy of Italian virtuosity or the power of the German genius? Verdi vs Wagner: which opera composer do you prefer?  Vote and tell us more about your choice or what you enjoy in their music.
Links:
Bach vs Mozart vs Beethoven  Beatles vs Rolling Stones  Best Russian novelist: Dostoyevsky or Tolstoy?


Giuseppe Verdi or Richard Wagner: the virtuosity of the Italian maestro or the power of the German genius?