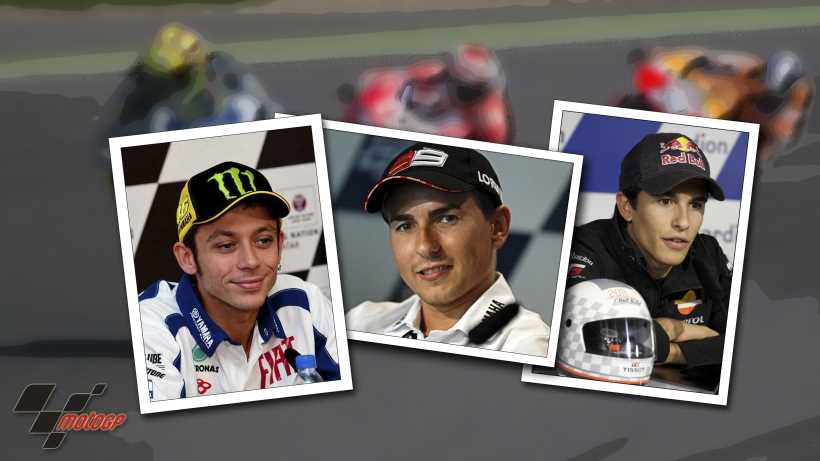 Source: Composite by G_marius based on motoracereports' and Mark Regan's  images

Rossi vs Lorenzo vs Marquez

Marc Marquez and Jorge Lorenzo have won all MotoGP World Championships since 2012. Valentino Rossi last sat on the throne of the ultimate motorcycle racing competition in 2009. However, many still consider the Italian as the all time best racer. Bad luck and some problems with the competitiveness of his motorcycle may explain partially why he since finished the Championship three times on the number two spot but did not manage to claim another season victory. The rivalry among these three pilots continue to be one of the most entertaining in the world of sports today.

Valentino Rossi (1979) is one of the greatest sports legends. The Italian idol is arguably the most successful motocycle racer in history. Rossi started his impressive Grand Prix career racing in 1996 for Aprilia in the 125cc category and won his first World Championship the following year. Similarly he won the 250cc and 500cc World Championships in his second participation in each of these categories (1999 with Aprilia and 2001 with Honda). After that Valentino Rossi was six times winner of the new motorcycle racing premier class, MotoGP, 2002, 2003 (with Honda), 2004, 2005, 2008, and 2009 (with Yamaha). Rossi is the all time rider with more victories, 89, in 500cc/MotoGP. He drove a Ducati in 2011 and 2012 and since 2013 he is back with Yamaha. Rossi had three very good seasons in a row ending up 2nd in 2014, 2015, and 2016. However, he could only finish 5th in the 2017 championship.  Can "the doctor" still win another MotoGP World Prix?

Jorge Lorenzo is a Spanish racer born in Mallorca  in 1987. Lorenzo started road racing in 1997 and won the Aprilia 50cc cup in 1998. In 2000 he became the youngest racer in the Spanish 125cc series and the following year the youngest person to win a European 125cc race. Jorge Lorenzo made his debut in the 125cc class in 2002 with Derbi and moved up to the 250cc category in 2004. He won the 250cc World Championships in 2006 and 2007 with Aprilia. Since 2008 Lorenzo has competed in MotoGP with Yamaha and won the titles in 2010, 2012 and 2015. Despite his young age, he has already 44 victories and 109 podiums in MotoGP. The landing of Lorenzo to the Ducati Team has not been as smooth as expected and in 2017 he has not managed three podiums but did not win any race. Will the Spanish "Spartan" be back on top of the podium regularly again in 2018?

Marc Marquez is even younger than Lorenzo. The Spaniard (born in Cervera in 1993), a declared fan of Rossi, is among the few riders who have won the World Championship in the three categories (as Rossi). Marquez started racing in the 125cc World series in 2008 and won the Championship with Derbi only two years later. Then he moved up to 250cc, winning it in his second participation in 2012 (with Honda). His record is impressive; since he joined MotoGP in 2013, he has won 35 races and the first two Moto GP World Championships in which he participated (again with Honda). Marquez has since also won the 2016 and 2017 MotoGP World Championships and has already broken many of the records that Rossi and Lorenzo had previously set, and it is likely that he will get even better in the years to come.

Who is the best MotoGP racer?

These three rivals are racers of great bravery and skill. Rossi is the most experienced and has always been praised for the way he analyzes races. Until the arrival of Lorenzo and Marquez, Rossi was also considered the fastest pilot. However, the young Spaniards have quickly proved their potential and matched Rossi's legendary aggressive racing style. The rivalry among these racers is one of the most exciting in sports today, similar to that between the top football, basketball or tennis players that we are also discussing on netivist. Moreover the tensions between the three pilots became visible at the end of the 2015 season when they accused each other of not playing fair. Rossi accused Marquez of helping Lorenzo win the title. Marquez accused Rossi of kicking him and making him fall in the middle of the last Malaysia GP. Now the relationship between the Italian and the Spanish racers is not good at all. During the 2016 MotoGP championship, although the tension between these racers has decreased, there have been a few occasions in which they have made some public accusations and complained about the behavior of each other on and off the track. The 2017 MotoGP season was less eventful from that point of view and the three racers seem to be much more focused on in-race issues.

Who do you think is the best racer and who is going to win the current championship?

Rossi vs Lorenzo vs Marquez: which of these three racers do you prefer?  Vote and share your views on what makes them such special riders.