Which is the best football league: the English Premier League or the Spanish Liga? 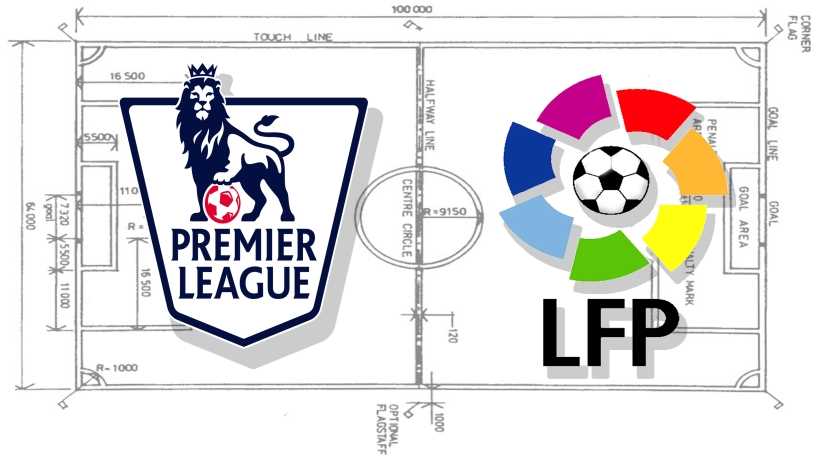 The English Premier League and the Spanish La Liga are the most popular football leagues in the world. But which league is better?

The English Premier League (EPL), known before 1992 as the Football League First Division (created in 1888) is the oldest and the most watched football league in the world, and the one with the highest revenues from TV rights. It is also currently the second league in Europe according to UEFA rankings. 5 English team have won the UEFA Champions League for England with a total of 12 titles. Liverpool, with 5 titles, is the most successful English club in this competition. Manchester United (3), Nottingham Forest (2), Aston Villa (1) and Chelsea (1)  have also won the top competition. The Premier League also hosts other legendary teams in Europe such as Arsenal, Tottenham Spurs and Manchester City. Top players such as Aguero, Hazard, Sanchez, Salah, Pogba, Silva and Kane are currently playing in the Premiership. Likewise some of the most famous managers in the world such as Jose Mourinho, Pep Guardiola, Jurgen Klopp and Antonio Conte are leading Premier League clubs.

The Spanish La Liga, also known as Primera División, started in 1929. It is currently the strongest league in Europe according to UEFA. Real Madrid and Barcelona have won for Spain a total of 17 UEFA Champions Leagues, the most important continental competition for clubs, more than any other country. Real Madrid is the most successful club in the history of the Champions League (12 titles) and Barcelona FC has won 5 titles. There are other great teams in Spain which have been feared in Europe over the last decade such as Atletico de Madrid, Valencia and Sevilla (which happens to be the most successful club in the history of UEFA Europa League with 5 titles). If you want to see playing top quality players such as Christiano Ronaldo, Messi, Suarez, Bale Griezmann, Benzema and Coutinho, you need to follow the Spanish League. Although some argue that the Barcelona FC and Real Madrid dominance diminishes the interest of the competition, most experts tend to agree that today Spanish La Liga can be considered that which host the top quality football in the world. El Clasico games cannot be match by any other domestic competition game in the world.

Premier and Liga are the most popular football (soccer) leagues in the world followed by millions of people on all continents. Both host some of the best players, best managers, and most successful clubs. But, Spain or England, which country has the best league? Do you prefer more physical football such as the English one or a football more based on technique? Do you think that the much higher average budget of English clubs will end up with the current Spanish dominance in European competitions (last four Champions Leagues and 3 our of the last 4 UEFA Cups were won by Spanish clubs)? Vote and share your thoughs

Which football (soccer) league is better: the English Premier League or the Spanish Liga?  Vote and share your thoughts!


Which is the best football league: the English Premier League or the Spanish Liga?