Who is the best quarterback of all time: Montana, Brady, Unitas, Marino or other? 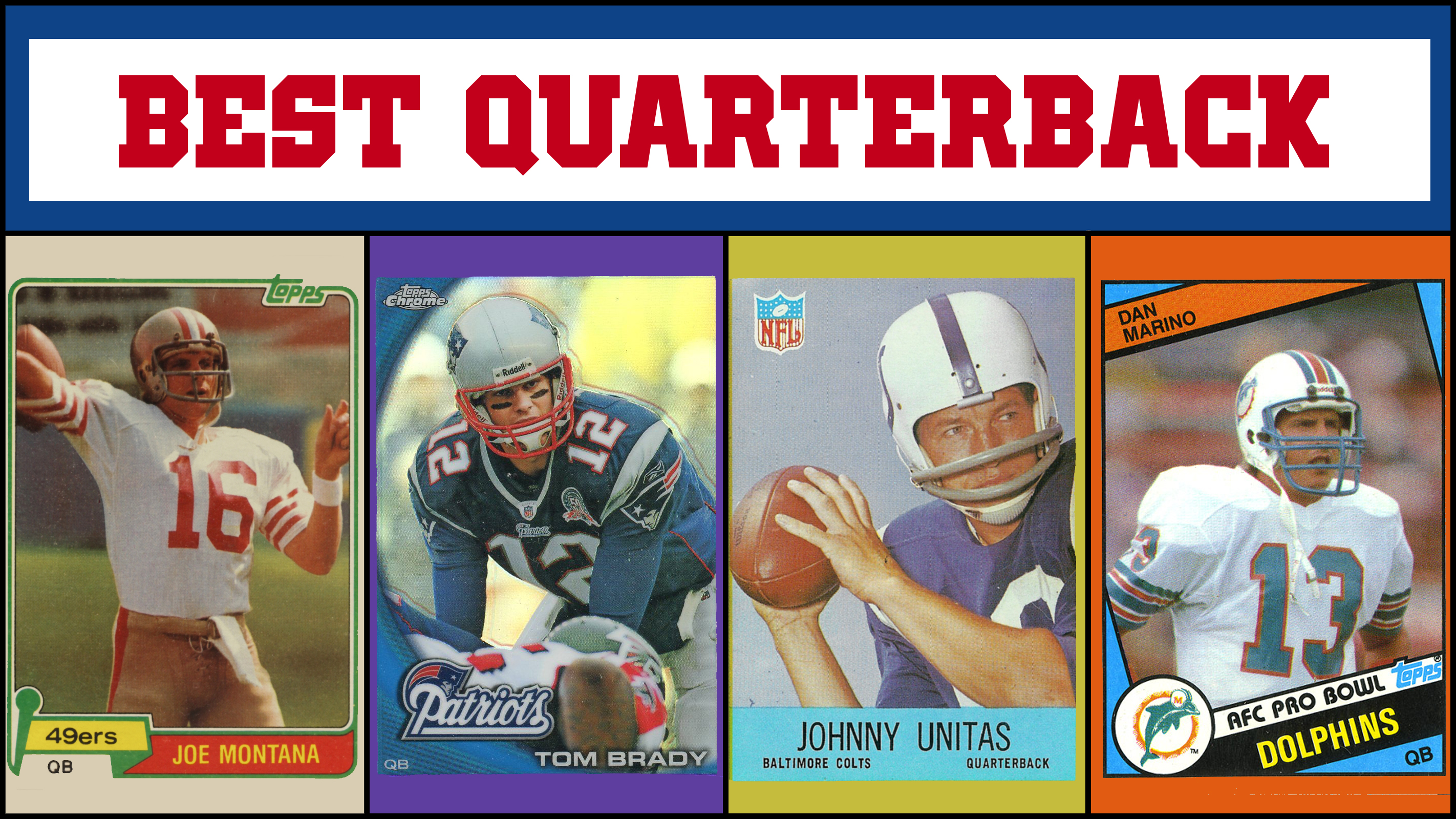 Source: This image was created by Alejandro Migueles Osuna for netivist.org. If you want to use it you simply need to attribute it by linking to this page or to https://netivist.org. Thanks

We are discussing who is the best quarterback in NFL history. We have shortlisted Montana, Brady, Unitas and Marino. Could you help us add others to the list and decide who is the greatest among them?

Who is best quarterback of all time?

The debate about the all-time best quarterback is contentious. Depending on the statistics taken into consideration, different footballers deserve the title. However, not everything in football is quantifiable. Some of the best quarterbacks of all time became legends due to the their particular play style, the emotions they generated in their fans, their audacity or simply because of some trick plays and memorable moments in specific games. We have shortlisted four players that consistenly appear in most top 10 lists: Joe Montana (San Francisco 49ers and Kansas City Chiefs), Tom Brady (New England Patriots), Johnny Unitas (Baltimore Colts), and Dan Marino (Miami Dolphins).

The mythic Joe Montana, nicknamed "The Comeback Kid" and "Joe Cool," was born on 11 June 1956 in New Eagle, Pennsylvania. Montana was such a talented sportsman that he was initially offered a scholarship to play basketball at North Carolina State University. After playing college football for the University of Notre Dame, he joined the San Francisco 49ers in the 1979 draft. Montana managed to transform the previously mediocre 49ers into one of the most successful teams of their time. Football fans will always remember "the catch", his game-winning 92 yard-drive touchdown pass in Super Bowl XXIII. Before retiring in 1994 he joined the Kansas City Chiefs, were he played the last two seasons of his career. The 49ers retired the number 16, the jersey Montana wore.

The New England Patriots star was born in San Mateo, California on 3 August 1977. Despite some controversies during his career, Tom Brady is an unquestionable contender for the title of best quarterback of all time. As Montana, Brady also excelled in several sports. He turned down an invitation to play baseball for the University of Michigan. Brady had an impressive last season at college and was drafted by the Patriots in 2000. In 2001, due to an injury of the Patriot's starting quarterback, Drew Bledsoe, Brady had the chance to demonstrate his abilities and let the New England team to its first ever Super Bowl victory, and received the MVP award. Fans will always remember the Brady-Manning rivalry and the historic Super Bowl LI victory in 2017, when Brady led a 25-point come-back against the Atlanta Falcons. On LII, despite his brilliant performance the Patriots lost again the Philadelphia Eagles 41-33.

"The Golden Arm," as Johnny Unitas was nicknamed, was born in Pittsburgh, Pennsylvania in 1933 in a family of Lithuanian descent. Despite his humbling beginnings and a not-so-memorable trajectory in college, Unitas was drafted by the Pittsburgh Steelers. Unfortunately he was dropped before the season began. A Baltimore Colts' scout noticed him while he was playing for semi-pro Bloomfieds Rams. Unitas was finally given an opportunity in the NFL in 1956. This was the beginning of a legendary career and two years later he was already considered the best quarterback in the NFL. On 28 December 1958, Johnny U led the Colts in their NFL championship victory against the New York Giants, in what became known as the "greatest game ever played." Unitas spent 16 seasons with the Colts and moved to the San Diego Chargers in the last season of his career, in 1973. He died of a heart attack in 2002.

Daniel Constantine Marino Jr. was born in Pittsburgh, Pennsylvania in 1961. After a stellar college career in the University of Pittsburgh, Marino joined the Miami Dolphins, in 1983. He led the Florida franchise for 17 seasons, until he retired in 2000. Marino never won an NFL championship and lost his only Super Bowl against Montana's 49ers. However, he is still considered one of the greatest quarterbacks ever. He set dozens of records, of which many are still active, such as the most seasons leading league pass attempts, completions, and lowest sack percentage among others. Marino's famous "clock play" in 1994 against the New York Jets is one of the best trick plays in NFL history. Could Marino career have been even more impressive if he had played in a stronger squad?

Other great quarterbacks in NFL history

Who is the best quarterback ever? Vote below and explain your choice and feel free to suggest other names on the discussion forum below!


Who is the best quarterback of all time: Montana, Brady, Unitas, Marino or other?