Cool small cars: Mini vs 600 vs Beetle vs 2CV. Which is the most iconic? 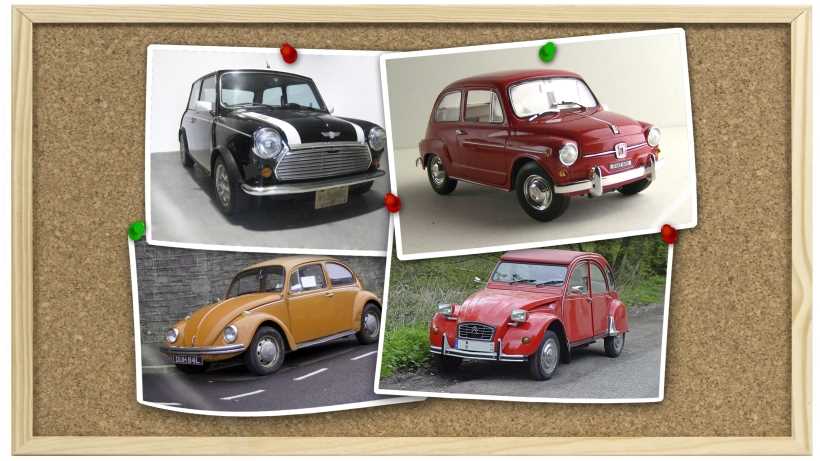 Source: If you want to use it you simply need to attribute it by linking to this page or to https://netivist.org. Thanks

Are you looking for a cool small car? Mini, 600, Beetle and 2CV are four iconic vintage cars you may want to consider. Which of them do you prefer?

In Europe is still common to come across one of those small cars that were extremely popular decades ago. Some of them such as the Morris Mini, the Fiat 600, the Volkswagen Beetle and the Citroën 2CV have become trully iconic cars and valuable pieces for fans and cars collectors. Who has not dreamt of owning one of those? Or at least who has not hear stories of their parents or grand parents about their first cars? Several new versions of these classic cars have been produced, but we want to compare the originals.

The British Motor Corporation (BMC) Mini is a small economy car produced and marketed from 1959 until 2000. The original Mini quickly became an considered a British icon of the 1960s. Its witty design influenced a generation of car manufacterers. The vehicle is in some ways considered the British equivalent of its German contemporary the Volkswagen Beetle and the Italian Fiat 500. 5,3 millions Minis had been sold by 2000 and it was voted the second most influential car of the 20th century, behind the Ford Model T.

The Fiat 600, Seicento in Italian, was the Italian response to the Beetle, Mini and 2CV. More than 2.5 million of this tiny (only 3.2 meters long) and inexpensive car (cost equivalent to US$ 7300) were produced from 1955 to 1969 in Turin. However, this car became extremely popular in other countries like Argentina, Spain and Yugoslavia, where the car was produced and marketed under different brands such as Sevel, Seat and Zastava. Including all these variants almost 5 million cars were produced worldwide.

The German Volkswagen Beetle is the oldest of the lot. Also known as the Käfer, Volkswagen Type 1 or Volkswagen Bug, is a two-door,rear-engined economy car manufactured and marketed by from 1938 until 2003. To a great extent the Beetle can be considered the precursors of the other cars in this list. We owe the design of this affordable car to Ferdinand Porsche. The Beetle is the longest-running and most-manufactured car of all times, with more 21.5 million cars sold worldwide, and has contributed to the international reputation of German cars.

The name of the Citroën 2CV, or in French deux chevaux (“two horses”), refers to the two tax horsepower of its front-engine. This economy car was first at the 1948 Paris Mondial de l'Automobile and manufactured by Citroën until 1990. The 2CV was praised by its original and smart design. Several variants of the 2CV were produced, including small 2CV-based delivery vans known as Fourgonnettes. In total, over 8.8 million of these cars were produced.

Watch some documentaries on these historical cool cars:

They are part of 20th century history. Are you among those who are lucky enough to still own one of these iconic European cars? Have you ever driven one of them? Do you have any anecdote to share about these popular vintage cars?

Which of these cool small cars do you prefer: Mini, 600, Beetle or 2CV? Vote and share you views.
Links:
American, European or Asian cars?  BMW vs Mercedes  Camera showdown: Canon vs Nikon