Bender vs Roger: Who is cooler, the Futurama's robot or American Dad's alien? 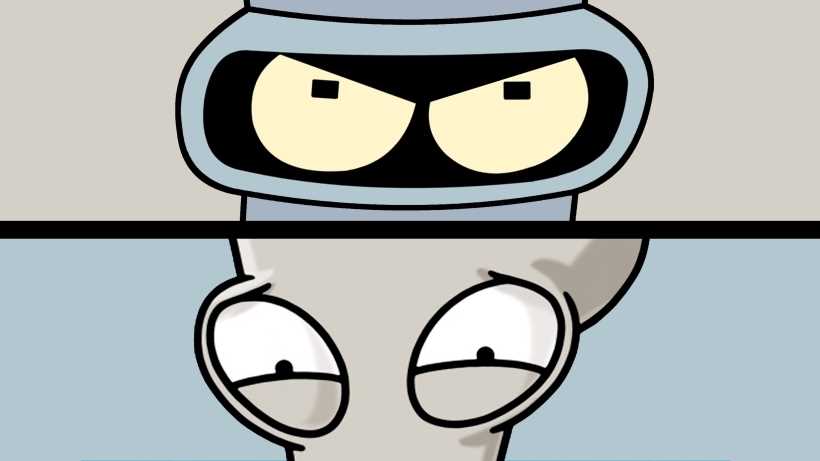 Cool cartoon characters in TV series: Bender vs Roger. Futurama and American Dad are full of funny characters, but the robot and alien are very special. Who is cooler: Bender or Roger? Vote and tell us why

Bender ʺBendingʺ Rodriguez from Futurama and Roger from American Dad! are among the coolest characters in the history of US animated series. Bender and Roger both display a quite "unorthodox" behavior to say the least. They're rude, manipulative and have little interest in the feelings of those around them. Bender, the Mexican robot, notorious womanizer and finds humans an inferior species; Roger, the grey space alien and master of disguise, always speaks his mind, no matter how insulting his comments are. Which one is your favourite?

Bender "Bending" Rodríguez was created by Matt Groening for his famous series Futurama (1999 –2013). The American voice actor and comedian John DiMaggio give voice to bender, one of the funniest and most controversial Futurama characters. Bender is an industrial metalworking robot, built in 2996 at Fábrica Robótica De La Madre (Spanish for "Mom's Robot Factory"), a manufacturing facility located in Tijuana, Mexico. He has a comic, antihero-type role in Futurama's plot. His adventures with his friends Fry, Leela and Professor Farnsworth are hilarious. Bender is s a selfish, egomaniac, foul-mouthed  robot. Leela describes him as an "alcoholic, whore-mongering, chain-smoking gambler". Some of the best Bender's quotes:

Roger Smith is one of the coolest American Dad characters. Seth MacFarlane designed and given voice to this centuries-old depraved grey space alien since 2005. According to American Dad!'s plot, Roger came to earth over 60 years, after having being tricked by other aliens. He was saved and adopted by Stan Smith, a CIA agent. Roger began the series as a sensitive pushover who was often ridiculed, taken advantage of and cheated. However, over time, the character unveiled himself as a increasingly cruel, hedonistic, self-absorbed, devious, and amoral. Roger, who lives with the Smith family, dresses up in a variety of personas and describes himself as a "fey pansexual alcoholic non-human". These are some of Roger's most notoriuos quotes:

Ad you can see both characters share many things in common. But which one would you choose? Do you laugh more with Bender or Roger?

Check these two funny videos of Bender and Rogers:

Bender vs Roger: Who is cooler, Futurama's robot or American Dad's alien? Vote and tell us more about the most memorable moments of these characters.


Bender vs Roger: Who is cooler, the Futurama's robot or American Dad's alien?