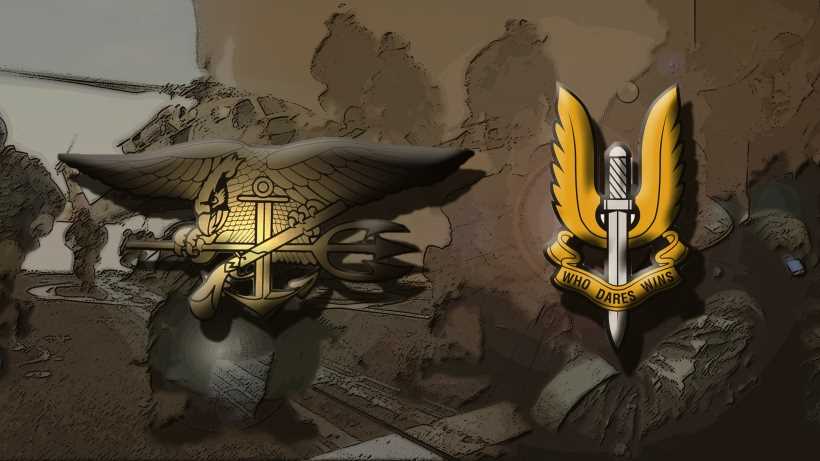 We contrast the British SAS and the US Navy SEALs, two of the best special forces in the world. Which of the two elite units has the best soldiers and better reputation? Find out more about other top military elite units and share your knowledge about them.

Best Special Forces in the world: SAS vs Navy SEALs

The Navy SEALs and SAS have become well known thanks to the success of some of their operations, and also due the popularity of some movies and video games based on them. Not only are the UK SAS and the US Navy SEALs similar special forces, but they are also set to join efforts in the fight against global terrorism. We debate which of the two deserves to be considered the most prestigious and effective special operations force in the world. We also list other units you may consider among the most elite special forces in the world.

The Special Air Service (SAS) was created by the british army on 1941 during World War II. The SAS serves as a model for special forces around the world. The unit undertakes a number of roles including covert reconnaissance, counter-terrorism, direct action and human intelligence gathering. The Special Air Service comprises three units: one Regular and two reserve Army Reserve units. Their motto is: “Who Dares Wins” and reflects the bravery required in their operations. They became popular in 1980 during the assault on the Iranian Embassy in London SAS have had a huge impact within different armies, being an inspiration for other governments when creating their own special forces units such as the New Zealand Special Air Service, Australian Air Service, and US Delta Force. Most recently SAS operations in Iraq against Islamic State fighters have brought them back into the spotlight.

The recruitment process is very selective for the SAS. Historically the SAS had a strength of 400 to 600 men, but it is set to grow in the next few years. Only current members of the UK Armed Forces are considered, usually only those with a Commando or Airborne forces background. Fitness and endurance tests include 40 miles marches with full equipment concluding with a 4 mile run and 2 mile swim. They also conduct survival tests in the jungle either in Malaysia, Belize or Brunei, as well as parachute courses. Moreover, SAS candidates must endure the famous resistance to interrogation (RTI) test which lasts 36 hours. Less than a fifth of the candidates initially pre-selected manage to join the SAS operational squadron.

Watch this documentary on the history of SAS

The US Navy SEALs (Sea, Air or Land) are the principal special operations force and a part of the Naval Special Warfare Command and United States Special Operations Command. The Navy SEALs are trained to operate in any environment and climate from the desert to the Artic. The CIA elite Special Operation Group (SOG) recruits its members from SEAL teams. We can trace their origins to different units operating in WWII such as Amphibious Scouts and Raiders, Naval Combat Demolitions Units or OSS Operational Swimmers. The motto of the Navy SEALs is: “The only easy day was yesterday” and captures the extremely tough training and selection process and operations their members need to face. Their main tasks are similar to those of the SAS: covert reconnaisance (often before ), counter terrorism, unconventional warfare, and direct action. The SEALs have conducted operations in Vietnam, Panama, Iraq and Afghanistan among other countries. They became extremely well known on May 2011 after the killing osama Bin Laden.

The recruitment process of the SEALs is meant to select the toughest and best soldiers in the world. The size of this force is approximately 2,500 men. Many psychological and physical tests need to be passed to be accepted as a prospective candidate. The SEAL physical screening test (PST) includes a 500 yards swim in 12:20 min, 42 push-ups in 2 minutes, 50 sit-ups in 2 minutes, 6 pull-ups and a 1.5 mile run in 10:30 minutes. Then recruits must attend a 8-week Naval Recruit Training, 8-week Naval Special Warfare Prep School, 24-week Basic Underwater Demolition / SEAL school, 5-week Parachute Jump School and a 26-week SEAL Qualification Training program. After graduation they follow an 18-month predeployment training programme. The acceptance rate is 20-25%, but to reach certain elite teams within Navy SEALs, such as the famous "Team Six" it is much more difficult.

Watch this interesting documentary about the Navy SEALs

All military analysts praise the training and effectiveness of both groups, but which of the two do you admire the most?

Please feel free to add any other special ops units worth mentioning to the comment section below and join our debates on deterrence theory, WMD and peace and the pros and cons of drone strikes

Which are the best military special forces in the world: SAS, US Navy SEALs or another? Vote and share your views about them and about any other special forces that you think should be considered the best.