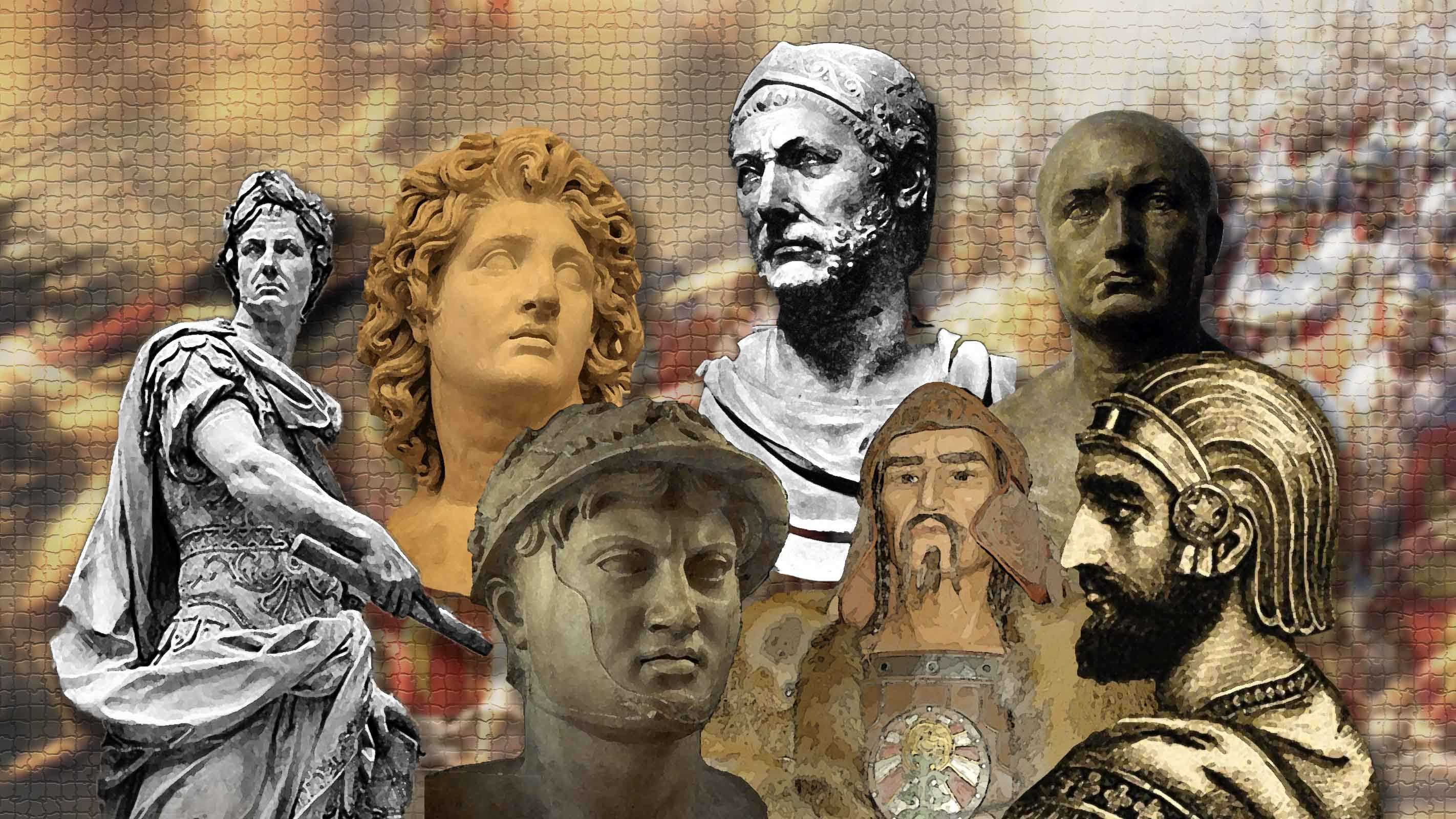 Find out who was the greatest among the military leaders in ancient history: Cyrus, Pyrrhus, Alexander, Hannibal,  Scipio Africanus, J. Caesar, or Attila? Vote and suggest other military leaders on the discussion forum below.

Warfare has shaped the history of our civilizations. We have shorlisted seven of the greatest military leaders in ancient history. These are men led formidable armed forces and contributed to the formation and fall of empires. Their military accomplishments, strategies and tactics are still studied by most military historians today. Help us decide who among them deserves to be considered the best military leader of antiquity.

Cyrus II of Persia or Cyrus the Great (c. 600 or 576 –530 BC) was the founder of the Achaemenid Empire and one of the greatest military strategists in history. Cyrus was considered by the first historians as the "most amiable of conquerors." Rather than on violence and tyranny, Cyrus sustained his large empire on generosity and good planning. He respected the religions and customs of the territories he conquered and established a successful model of centralized administration. Under his rule many people lived peacefully. His famous proclamation inscribed onto the Cyrus Cylinder is considered the oldest charter of human history. His style of government granted him the admiration of other political leaders and thinkers such as Thomas Jefferson, Machiavelli, Julius Caesar, and Alexander the Great. Cyrus conquered the Median, Lydian and Babylonian empires and led a capmaign into Central Asia. After three decades of reign Cyrus the Great died in a battle against the Massagatae.

Alexander III or Alexander The Great (356–323 BC) was a king of Macedonia who managed to create an empired which stretched from modern-day Pakistan to the Balkans. His father, Philip, hired Aristotle to tutor Alexander, who from very young age showed abilities and ideas. At the age of sixteen, while Philip was away, Alexander defeated the Thracian Maedi revolt and founded the city of Alexandropolis. Alexander was a very successful general until he inherited the throne at the age of twenty, following the assassination of Philip. Alexander got rid of his political rivals and launched campaigns in the Balkans, Thrace and against the Greek city states. He conquered and destroyed Thebes and entered war against Sparta and Persia. He won the key battels of Granicus, Issus, Gaugamela and the siege of Tyre. He conquered Eqypt, Persia and continued his marching his troops towards the India. Alexander the Great fell ill and died in Bablylon. During his short life Alexander led his armies across more than 17,000 km, founded 70 cities, won many historical battles and remained undefeated in battle. He is undoubtedly the most famous general in ancient Greece and one of the greatest military leaders in history.

Pyrrhus of Epirus (319–272 BC) was the king of the Molossians and the royal Aeacid house and later was crowned as king of Epirus and Macedonia. Pyrrhus very costly military victories against Macedonia and Rome gave rise to the term "Pyrrhic victory." Pyrrhus was one of the most important and bold opponents of the Roman Republic. When Tarentum, a Greek colony in southern Italy asked his assistance, Phyrrus crossed Italy with 25,000 men and 20 elephants. He defeated Rome at Heraclea and Asculum. However, after the heavy casualties suffered by his army, Pyrrhus claimed "another such vicory an I shall be ruined". Phyrrus lifted a Carthaginian siege of Syracuse but unsuccessfully tried to create a kingdom in Sicily - after a inconclusive battle against  a vastly superior Roman army at Beventum he decided to end his campaign in Italy. When he returned to Epirus Pyrrhus invaded Macedonia but failed in his attempt to take Sparta. Pyrrhus was finally killed, in the streets of his hometown Argos, during a night skirmish.

Hannibal Barca  (247 – between 183 and 181 BC) was a Carthaginian military commander who became famous during the Punic Wars between Rome and Carthage. Hannibal was part of a family of military commanders. His father Hamilcar Barca led the Carthaginians during the First Punic War. His brothers Mago and Hasdrubal helped him dispute Rome's supremacy over the Mediterranean shores during the Second Punic War. After having subdued the Spanish tribes, Hannbal marched a large army, 38,000 infantry, 8,000 cavalry and 38 elephants, from Iberia over the Pyrenees and the Alps into Italy. He won three historical victories over the Roman Legions, the battles of Ticinus, Trebia, Trasimene and Cannae. For fifteen years, he controlled large parts of the Italic penninsula but due to a Roman counter invasion in the North of Africa, he was forced to return to Carthage. Hannibal military genius was undisputed. During the Italian campaign he was facing the Roman Republic which at the time of the Second Punic War was the hegemonic naval power and had three time as many soldiers available as Hannibal. After the defeat in the Battle of Zama, Hannibal went in exile but continue to fight for different kings. Hannibal took poison to avoid falling in the hands of the Romans and died at Libyssa. His impressive military leadership and accomplishments earned him place in history and admiration of many of the greatest military leaders such as Bismarck, Alfred von Schlieffen and Patton.

Publius Cornelius Scipio Africanus or Scipio the Great (236–183 BC) was a Roman general who managed to defeat Hannibal in the battle of Zama, and thus, give Rome the victory over Carthage in the Second Punic War. During the battle of Ticinus, at the age of eighteen, Scipio saved the life of hs father Publius Cornelius.He also survived the disastrous battles of Trebia and Cannae. Having lost his father and uncle in the war against Carthage, Scipio was determined to see Hannibal defeated. Since he was given command at the age of twenty-five, Scipo never lost a battle. Scipio built his fame during the campaign in Hispania where he managed to capture Carthago Nova, the main Cathaginian city in the Iberian Penninsula, and later successively defeated the Carthaginian commanders. Scipio had very good negotiation skills that served to gain the support of several Hispanian chiefs and the later that of the Numidian princes. During the campaign in Africa, the attack at Utica and the victory at Zama demonstrated Scipio's military genius. Scipio Africanus had some problems with justice and died during his retirement at Liternum.

Gaius Julius Caesar (100–44 BC) was the most famous Roman general and statesman. He played a key role in precipitating the replacement of the Roman Republic by the Roman Empire. Caesar demonstrated himself to be an outstanding military strategist during the conquest of Gaul. He defeated the Helvetii, the Veneti and the Belgic tribes, conquered Armorica, repelled the incursion of the Germanic Tencteri and Usipetes, crossed the Rhine and subdued the Morini and Menapii, and invaded the south of Britain. Julius Ceasar also defeated the Gaul revolt led by Vercingetorix who was forced to surrender at the battle of Alesia. The confrontation with Pompey, who had accused Ceasar of treason, resulted in a civil war. Caesar crossed the Rubicon river and fought and defeated Pompeys armies in Italy, Hispania and Greece. Caesar also lauched successful miliatery campaigns in Egypt, modern-day Turkey and Tunisia.  His military victories during the Gallic War and the Great Roman Civil War, earned Julius Caesar unparallel military and political power. He served as a Roman Dictator until his assassination by a group of senators led by Brutus.

Attila the Hun (434–453) was the leader of the Hunic Empire and the most feared enemy of the Rome, where he had been a hostage when he was a child. Attila took control of the Huns after killing his brother, Bleda. He was a political and military leader who managed to unite Huns, Alans, Ostrorgoths and other germanic tribes. Attila crossed the Danube twice conquering and plundering the Balkans. He later invaded the Eastern Roman Empire but was unable to take Costantinopole. He then crossed the Rhine and attacked the Roman Gaul, reaching Aurelianum. Following his defeat at the Battle of the Catalaunian Plains, Attila invaded and ransacked Italy. Similarly, he failed to conquest Rome. He was planning further attacks on the Roman Empires but he died in mysterious circumstances after the celebration of his latest marriage. Although Attila has been usually displayed as a savage and cruel military leader, "The Scourge of God", many historians dispute that image, and depict Attila as a charismatic and bold military commander, with good diplomatic skills who managed to create an empire and to greatly contribute the demise of Rome.

Who was the greatest military leader in ancient history: Alexander, Hannibal, Cyrus, Julius Caesar, Pyrrhus, Attila or Scipio Africanus? Vote for one of these military geniuses and explain why do you think he was the best.