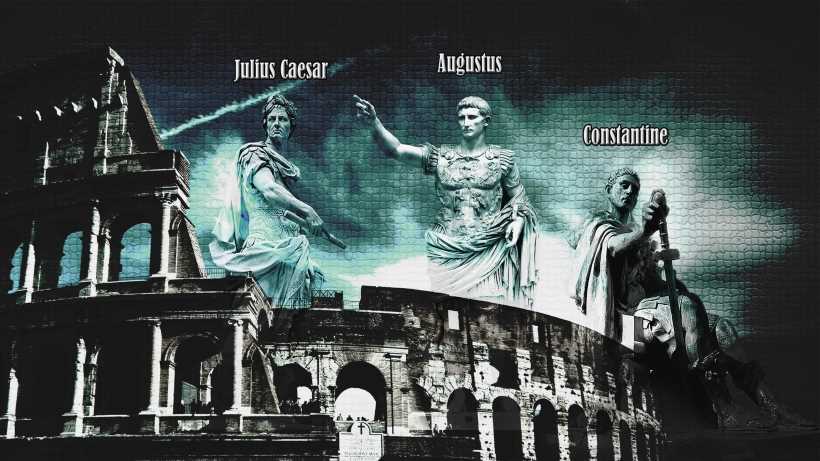 Source: Image based on Marie-Lan Nguyen, Gernot Keller and Ivan Flores Casasempere´s images. If you want to use it you simply need to attribute it by linking to this page or to https://netivist.org. Thanks

The history of Rome is full of great leaders and generals, but Julius Caesar, Augustus and Constantine deserve a special mention. Which of them do you admire the most? We compare their achievements and contributions and debate who should be considered the best roman emperor.

Gaius Julius Caesar, Augustus (born Gaius Octavius) and Constantine (Flavius Valerius Aurelius Constantinus Augustus) are three of the most salient figures in western history. These three men are clearly among the most influential emperors and political leaders in the history of Rome.

Julius Caesar (100 BC –44 BC) was born in the Julii patrician family and became one of the greatest military leaders in history, whose victories in the Gallic Wars allowed Rome to extend its territories to the English Channel and the Rhine. He initiated the invasion of Britain and built the first bridges across the Rhine. Julius Caesar was also instrumental in the demise of the Roman Republic and the emergence of the Roman Empire. After his victory in the civil war he was appointed "perpetual dictator". Julius Caesar is also famous for his assassination and his links with other historical figures such as Pompey, Vercingetorix, Mark Anthony and Cleopatra.

Other achievements and facts about Julius Caesar:

Watch this documentary about Julius Caesar

Augustus (63 BC –14 AD) became the first emperor of Rome after the assassination of his great-uncle Julius Caesar. His reign initiated an era of relative peace known as the Pax Romana. Augustus dramatically enlarged the Empire, annexing Egypt, Dalmatia, Pannonia, Noricum, and Raetia, expanded possessions in Africa, expanded into Germania, and completed the conquest of Hispania. He reigned for 41 years during which he reformed the Roman system of taxation, developed networks of roads, established a standing army and the Praetorian Guard, created official police and fire-fighting services for Rome, and rebuilt much of the city.

Other achievements and facts about Augustus:

Watch the Age of Augustus documentary

Constantine "the Great" (272 AD –337 AD) was hailed as the new Augustus, senior emperor of the west, by his troops during the military campaign in Britannia. After emerging victorious from a series of civil-wars he later became the emperor of both the Western and Eastern parts of the empire. Constantine enacted many administrative, financial, social, and military reforms to strengthen the empire and established his residence in Byzantium, which he named Constantinople. Constantine legalized Christianity and became the first Christian emperor.

Other achievements and facts about Augustus:

Watch this History Channel documentary on Constantine the Great

Observing the history of Rome, which of the of these three leaders deserves higher praise? Which deeds and achievements made them so important? Alternatively tell us which other Roman figure can rival them in terms of legacy.

Who was the best Roman emperor: Julius Caesar, Augustus or Constantine? Vote and share your knowledge and invite other aficionados to the history of Ancient Rome to join our public discussion.