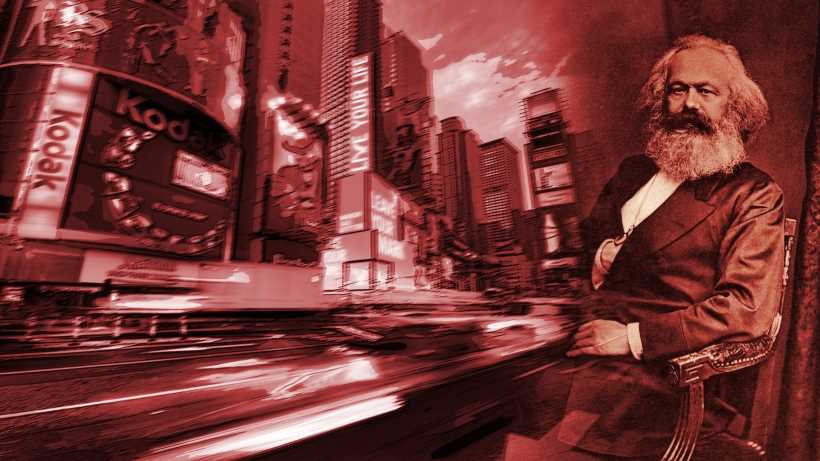 Source: Composite by G_marius based on a Trey Ratcliff's image.

The capitalism vs socialism dispute may not be over yet. Has the global financial crisis brought back class struggle? Is Marxism still relevant today? Can Marx help explain the rise in populism and nationalism? Join our poll and debate (below)

It is easy today to denounce Marxism, citing for example the dissolution of the communist bloc as evidence of the proven superiority of democratic capitalism. Across the world, and especially in academia, Marxism fell out of favour at the turn of the 1990s. Socialism was discredited for failing to deliver welfare and growth to the Eastern Communist Bloc, and Marxism was pitted as detrimental to economic welfare. However, it is possible to recover a reading of Marx that does more justice to his ingenuity and courage rather than pander to right-wing ideologues’ simplistic characterization of Marxist philosophy. This short debate article hopes to reinterpret Karl Marx in a way that allows us to reorganize and reclaim our democracy. In other words, democracy and socialism are not antithetical.

The global financial crisis is perceived by many as evidence that the German philosopher was right, a harbinger of change. Unemployment and inequality, as well as the rejection to the austerity measures imposed by governments are signs of the re-emergence of class struggle. Marx's revenge? Marxism may be on the rise, but are we really witnessing a radical shift in paradigms. Is capitalism doomed? Is the crisis proving that capitalism does not work? Or simply that a particular type of capitalism is problematic?

Yet, with globalization, the global financial crisis and the rising inequality in many advanced capitalist societies (e.g. UK and US), capitalism faces continued criticism, particularly among Marxists, as reinforcing divides between the wealthy and everyone else. So after a surge to the nationalist right and far right in Europe, anti-austerity left wing movements and parties (e.g. Syriza, Podemos, the Occupy Movement), Marxist anti-capitalist debates might be back on the agenda.

Interpreted in light of the recently concluded American elections, Karl Marx’s prediction of a class struggle seems even more prescient. According to Citylab, class divides are the main division between Clinton states and Trump states. Clinton states are richer while Trump states are poorer. Trump draws more support from states with greater instances of poverty compared to Clinton. This flies in the face of many pundits’ claims that American society has been growing more prosperous. The noted political scientist, Ronald Inglehart’s, theory of the rise of postmaterialist value seems especially problematic in light of recent events. According to him, with modernization, there will be cultural changes in society and people will come to converge towards a host of liberal values such as pro-immigration and environmentalism. However, what he failed to predict is that the increasing inequality as a result of modernization reinforces materialist values – people continue to make political decisions based on socioeconomic status. In this regard, Marx was prophetic.

Watch this video with a brief, and cartoony, introduction to Karl Marx's ideas:

According to a 1986 Hearst Corporation poll, half of the American population believed that the Marxist slogan “From each according to his ability, to each according to his need” is part of the American constitution. This highlights the grave misunderstanding of Marxist doctrines by many. The Marxist theorists and statesman Vladimir Lenin once denounced democracy and capitalism as an oxymoron. The machinery of capitalist democracy often entails the exclusion of the underclass. It is his central contention that public institutions are made to serve only the elites of society and free press controlled by the wealthy.

"These restrictions, exceptions, exclusions, obstacles for the poor seem slight, especially in the eyes of one who has never known want himself and has never been in close contact with the oppressed classes in their mass life (and nine out of 10, if not 99 out of 100, bourgeois publicists and politicians come under this category); but in their sum total these restrictions exclude and squeeze out the poor from politics, from active participation in democracy." — Lenin, The State and Revolution, Chapter 5

Watch this experts' debate "Karl Marx Was Right" filmed at the Royal Geographical Society in London:

Karl Marx may have made erroneous assumptions about the workings of the economic systems. Hardliner interpretations of his work by later communist statesmen have contributed to the decimation of entire populations, but at its core, Marxist philosophy should be appreciated for its power, depth, inventiveness and courage. Even though his theories are often unsubstantiated, he dares to offer an alternative to the prevailing status quo, and is one of the few philosophers to do so. The task of philosophy lies not in merely explaining the world, but to help reconstruct a more just and egalitarian society. Marx is the forefather of such a tradition, therefore, shouldn't he get more credit for that contribution?

Join our debate to discuss whether Karl Marx’s main ideas continue to be relevant today, and to what extent.

Emerging questions: What is the most important aspect of Karl Marx's legacy? What is the added value of neo-Marxism and the main limitations of neo-Marxist theory? Are Karl Marx's main ideas still relevant in the 21st century? Could they help understand the populist turn Europe and America are experiencing? What are the main pros and cons of a Marxist approach?

Capitalism vs socialism: is Marxism relevant today? Vote and explain why marxist ideology is or is not helpful in the current context. Feel free to invite anyone interested in philosophy, economics and democracy to join our debate.