Wittgenstein vs Heidegger: Who was the greatest philosopher of the 20th century? 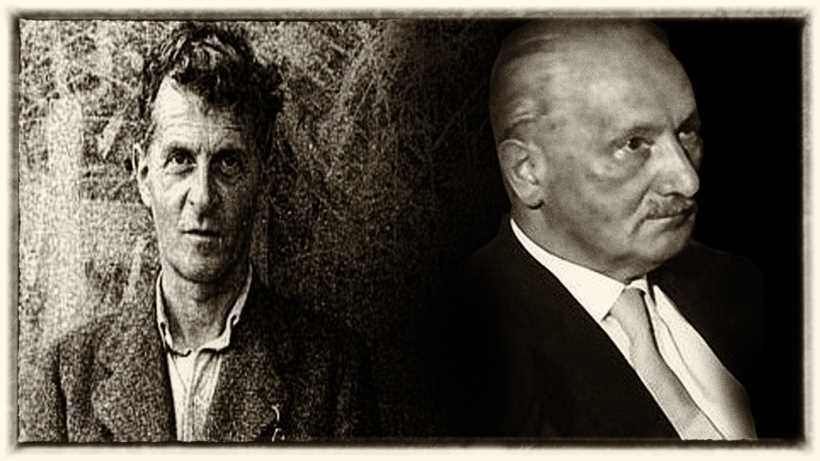 Source: Composite by G_marius based on Willy Pragher’s and  Ben Richards'  images.

Let us render judgment on the best use and abuse to which philosophy has been subjected in the last century. Let us ask: who was the greatest philosopher of the 20th Century? In one corner we’ve got a philosopher who published only one work during his life (Tractatus Logico-Philosophicus), that he then spent the rest of his life refuting, mostly in lectures that were later published as more or less apocryphal texts on his views: Ludwig Wittgenstein. In other corner we’ve got a philosopher’s whose life’s project was to uncouple philosophy from the deadweight of Cartesian dualism, and who brought back the primordial subject, Being, and embedded him deep into the tangible world, inseparable from it: Martin Heidegger. Game on!

Ludwig Josef Johann Wittgenstein (1889 – 1951) was an Austrian philosopher born in Vienna in one of the richest families in Europe. Despite the inherited wealth his life was not easy. Like his brothers and sisters he was educated at home. His father Karl was a perfectionist obsessed with instilling discipline and values in his children. This strict education and the aparent lack of empathy of his father seems to have scarred the family. Three of Wittgenstein's five brothers later committed suicide. Ludwig also considered suicide seriously. Wittgenstein was nonetheless also a very charismatic person who fascinated those who met him in life, including other philosophers, artists, novelists, and musicians. He had romantic relations with both women and men.

Wittgenstein started studying aeronautical engineering in Manchester University but due to his interest in mathematics and philosophy he moved to Cambridge, where he studied with Bertrand Rusell and met Moore and Keynes. He joined the Austrian Army during the First World War and in 1918 was captured and spent some months in a prisoner of war camp. It was during the Great War that he wrote his masterpiece, "Logisch-philosophische Abhandlung"  (1921) or "Tractatus Logico-Philosophicus", a book that inspired many subsequent philosophers and secondary literature and  produced a revolution in the the area of the analytic philosophy. After the First World War he abandoned philosophy for several years and decided to try different professions, including teaching, gardening and architecture.

The discussions on the philosophy of science in the Vienna Circle, which had been inspired by his Tractatus pushed him to return to the study of philosophy. In 1929 he joined again Cambridge University were he taught and wrote his second book "Philosophische Untersuchungen" or "Philosophical Investigations" which was published posthumously in 1953. Wittgenstein died of cancer in 1951.

Wittgenstein's philosophy can be divided in two stages:

Martin Heidegger (1889–1976) is one of the greatest German philosophers of the 20th century whose works are often associated with existentialism and phenomenology. Heidegger is also considered of the father of hermeneutics. Heidegger was born in Meßkirch, a rural area in Germany. His family could not afford to send him to university so Heidegger entered a Jesuit seminary instead. Supported by the Church, he joined the University of Freiburg, where he later broke with Catholicism and switched from theology to philosophy. Heidegger also served during the First World War although he was never sent to the frontline.

Heidegger became professor at the University of Marburg  (1923–1928) where he worked with (or taught) other German philosophers and thinkers such as Rudolf Bultmann, Paul Natorp, Nicolai Hartmann, Hannah Arendt, Hans-Georg Gadamer and Leo Strauss among others. In 1927 he published "Sein und Zeit,"  "Being and Time", his first and best known book before he returned to the University of Freiburg where he later became rector and taught until the end of the Second World War. Due to his active involvement with the Nazi Party, Heidegger was expelled from the university in 1946. He was nonetheless later readmited in 1951. Before the Second World War, Martin Heidegger had romantic relations with Hannah Arendt and Elisabeh Blochmann, among other women, both of Jewish descent. He also helped the latter to escape from Germany before the outbreak of the war. Heidegger died in Freiburg in 1976.

Heidegger's philosophy employed the methods of phenomenology in pursuit of metaphysical goals. "Being and Time" provided Heidegger international reputation and crucially influenced the works of many other Philosophers in the Continental tradition such as Gadamer's hemeneutics, Derrida's idea of "deconstruction" and Sartre's existentialism. "Being and Time," his first and most complex work, and what Heidegger considered an unfinished opus, tackles the question of what means for something to be. He moves from a notion of "formal ontology," the study of the a priori categories that describe objects through our perceptions and judgments, to that of "fundamental ontology," an Aristotelian-inspired search for what makes possible and unites our senses of what is to be. This is considered an attempt to reinterpret phenomenology which he had earlier contributed to developing with his mentor Edmud Husserl.

The question of Being is studied through the investigation of a human being called Dasein, "being-there." This investigation, by using transcendental hermeneutic phenomenology, becomes a very important exercise of philosophical methodology.

Later, Heidegger's thinking experiences an important evolution which he calls Die Kehre, "the turn," in which he distance himself from Sartre's existentialism. The question of Being remains core to his concerns, however he explicitly abandons not only the study of Dasein but also subjectivity. This period of Heidegger's philosophy constitutes, therefore, an important reorientation of his earlier project in which the point of departure is not anymore the description of ordinary human experience. "Contributions to Philosophy" written between 1936 and 1938 captures much of Heidegger's thinking after "Being and Time."

Wittgenstein and Heidegger are exceptional philosophers, but which of the two do you think is more influential? Who do you think has contributed the most to the history of philosophy and to our understanding of the world? Vote and comment below.

Watch this video which captures Heidegger's philosophy in a simple way:

Who was the greatest philosopher of the 20th century: Wittgenstein or Heidegger? Vote here and explain why, or which other philosopher deserves the title.


Wittgenstein vs Heidegger: Who was the greatest philosopher of the 20th century?