Converse vs Vans: which of these two styles of sneakers is the coolest? 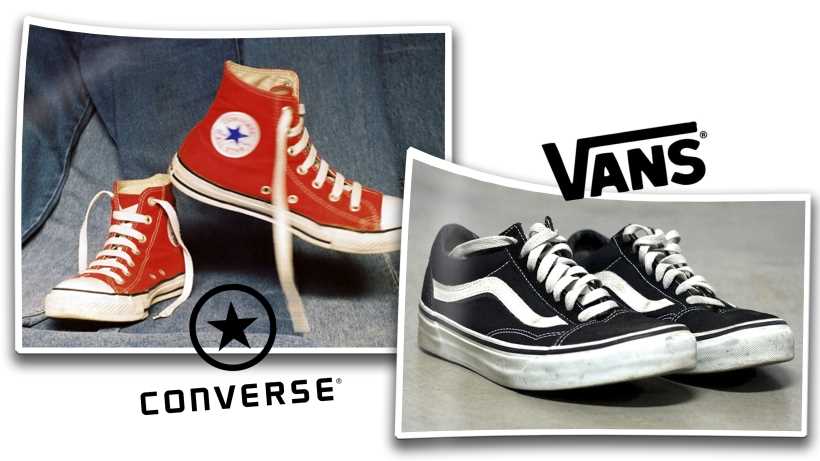 Source: Composite by G_marius based on Jorge Barrios' and Carlos Fernandez's images

Converse and Vans are American shoe manufacturers competing to produce the coolest sneakers. Find out which of the two is people's favorite

These companies have produced some of the most iconic and coolest sneakers in history. Converse and Vans contributed to popularize footwear with flexible rubber sole. Many other manufacturers have imitated their designs over the few decades but still their models enjoy great success in the market.

Converse Rubber Shoe Company opened for business in Malden, Massachusetts in 1908. Only a few years later, in 1917 Converse created the first version of the All Star, which became the first mass produced basketball shoes. During the 1920s the basketball Charles "Chuck" Taylor worked hard to popularize basketball as a sport and the All Star shoes. He taught the sports all over the country, promoting the shoes and even helping improving the design. In 1932 Converse added "Chuck Taylor" to the name of the All Stars. The high top white model of the "Chucks" was created for 1936 Olympics. The National Basketball Association (NBA) contributed to the fast growth of Converse. The Chuck Taylor All-Stars were the shoes most players used.

Since the 1960s, these iconic shoes became a favorite for some groups and subcultures and later became a mainstream product. Although Converse dominated the sneakers market from the 1920s to the 1970s the company lost ground against other manufacturers afterwards. Converse filed for bankrupcy several times and the brand was finally sold to Nike in 2003. However, the All Star sneakers continue to be as popular as ever. Both designs, the distinctive high top basketball and low cut oxford models have remained basically unchaged since 1949. These classic American sneakers are used by people of different ages and status all around the world.

Vans also has a long history. The Van Doren Rubber Company was established by Paul Van Doren and three partners in 1966 in Anaheim, California. They manufactured the Vans and sold them directly to the public. In the 1970s the company grew, in particular thanks to skateboarders, who liked very much the sticky and rugged rubber sole. In 1975, the Vans #95, known today as the Era, and a year later The Vans #44 deck shoes, also known as the Authentic. These models of sneakers became extremely successful among California skateboarders and BMX riders. The company expanded during the 1980s and started to create shoes for several other sports but also suffered many financial problems, and went bankrupt and was sold to an investment bank. The new owners believed in the sneakers brand and pushed for an international expansion.

From 1994, Vans has been manufacturing shoes overseas. Vans also started to sponsor musical festivals and sporting events (including surfing, skateboarding, BMX,snowboarding and motocross). In 2004 Vans launched Vans Customs allowing would-be fashion designers to create their own sneakers. Today users can design their own Era, Slip-On, Authentic, Old Skool, and several other Vans shoes. Next year,  in 2016, Vans will celebrate 50 years at the heart of youth culture.

What do think about these two brands and styles of shoes? What do they evoke to you? Are you closer to the basketball style or to the skateboard subculture?

Converse vs Vans: which of these two styles of sneakers is the coolest? Vote and tell us on the forum below why you like or dislike these classic American shoes.


Converse vs Vans: which of these two styles of sneakers is the coolest?