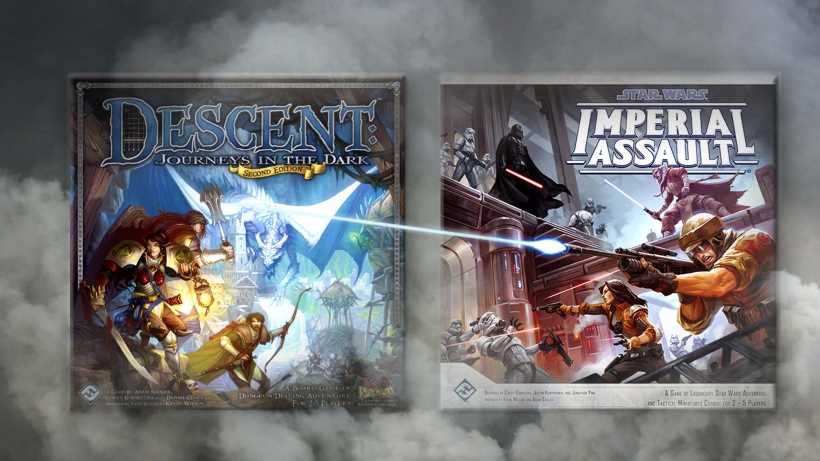 Fantasy Flight's Descent (second edition) and Star Wars Imperial Assault are probably the most popular dungeon crawler board games. Which is the best?

The board game industry is growing very fast and Fantasy Flight Games is one of the companies that has contributed the most to the popularity of the genre. Fantasy Flights has published many excellent thematic games such as Arkham Horror, Battlestar Galactica, Twilight Imperium, and the two games we are discussing today: Descent: Journeys in the Dark and Star Wars: Imperial Assault.

Descent and Imperial Assault are two of the best games in the genre of dungeon crawlers. These games have managed to improve concepts that were originally introduced to the board game hobby by Hero Quest in the 1980s. Although very similar in terms of mechanics, Descent and Star Wars Imperial Assault provide different gaming experiences.

Corey Konieczka and other designers of Fantasy Flight Games are to be credited for these two excellent games. Descent Second Edition was published on 2012 as an evolution of the original Descent (2005). This is a dungeon crawler set in the medieval fantasy world of Terrinoth. In Descent one player takes the role of an overlord and the rest of the players cooperate to accomplish a mission or defeat this evil enemy. Conversely Imperial Assault is set in the science fiction universe of Star Wars. One player controls the Empire and the other players control rebel heroes or mercenaries. In addition to the usual mission and campaign mode of dungeon crawlers, Star Wars Imperial Assault introduces a skirmish mode of play. This is a head to head tactical combat game inspired by games such as Heroclix, Heroscape or X-Wing.

Both games are based on modular boards that allow great variety in missions. Players have different skills, special abilities and equipment that they can improve from mission to mission. Of course these mechanisms are not as deep as in traditional role-playing games, but on the other hand Imperial Assault and Descent allow a very immersive experience with less time investment than RPGs such as D&D, Pathfinder and Star Wars Roleplaying Game. Moreover, the design and miniatures of these Fantasy Flight's games are of great quality.

Imperial Assault fans argue that the Star Wars game is an improvement on Descent Second Edition (which in turn was an improvement of the first edition). They can also enjoy the skirmish game, in which players do not need to cooperate or undertake the role of an overlord. On the other hand, many Descent fans argue that Star Wars Imperial Assault adds little to the genre of dungeon crawlers and that the fantasy theme fits much better this type of games. Descent has so far more expansions but Star Wars Imperial Assault will certainly catch up in this regard.

Which of the two Fantasy Flights games would you recommend? Are you more into the Star Wars science fiction theme or do you prefer the fantasy world of Terrinoth? Would you prioritize originality or you care more about the improved mechanics?

If you love board games join our debate on the best board game designers and best best gateway board game.

Best dungeon crawler board game: Star Wars Imperial Assault or Descent: Journeys in the Dark? Vote and tell us why