Differences between Game of Thrones books and TV show. Which is better? 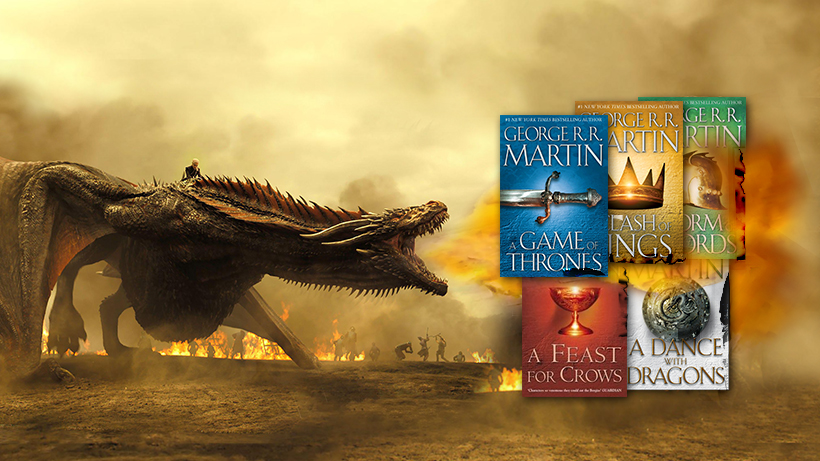 We compare and discuss Game of Thrones books vs show and decide which is better. Find out more about the major differences between A Song of Ice and Fire fantasy books and HBO's adaptation for TV.

Game of Thrones books vs show

A Song of Ice and Fire books

George R. R. Martin's book series A Song of Ice and Fire is widely recognized as one of the most ambitious and encapsulating epic fantasy sagas of all time. It is a story of ambition, greed, lust and treachery in a very rich fiction world.

The American novelist and screenwriter George R.R. Martin, inspired by the works of J.R.R. Tolkien, started working on the book series in 1991, and initially envisaged A Song of Ice and Fire as a trilogy. The story, set in the fictional world of Westeros, narrates the power struggles between different noble houses to control the Iron Throne and the destiny of the Seven Kingdoms. The name of the book series makes references to the cold North beyond the Great Wall where the mysterious White Walkers are threatening humanity, and to the dragons which come back to Westeros as the ultimate power tool. The intricacies of the plot, which unravels throughout many different locations and from the eyes of multiple characters, made Martin change his initial plans and lengthen the saga to seven books:

The magnitude and complexity of the the book series is such that the first 5 books expand over 4273 pages and include references to over two thousand different characters. But are the Game of Thrones books worth reading? It is a great investment in time, but the answer to the question is a resounding YES.

Game of Thrones books are a trully unique literary experience and met with an overwhelming positive response from the public and critics alike. The series has won three Locus Awards and one Nebula Award, as well as several nominations to these and other prestigious fantasy and science fiction literature awards. They have sold over 60 million copies and have been translated to more than 30 languages. Several novellas, comic books, video games and board games of the series have been released following the success of the books.

As the popularity of A Song of Ice and Fire grew, HBO understood the potential to turn it into a TV series. The contacts between Martin and the producer of the creator of the Game of Thrones show, David Benioff and D. B. Weiss, started in 2006 and the project was kicked-off in 2007. The first season was released in 2011, and as the book series, it was received with praise and large audiences.

Game of Thrones has won many different awards including 38 Emmy Awards (110 nominations). Season 6 of Game of Thrones has averaged over 25 million viewers per episode. The series, although considered a very good adaptation of the books, does not exactly match the books, reorganizing and omiting some parts of the story and emphasizing and revealing new ones. These the dates when the seasons were aired and their connection to the books:

When will season 8 of Game of Thrones be released? Unfortunately it seems that the last season of the show will not be released in 2018 but in 2019. This is one of the biggest TV productions ever; the last few seasons budget has been over $100 million. However, the key of the success is not the special effects or impressive scenery and custom design. What makes Game of Thrones one of the best shows in television history is the quality of acting and the personality of its characters. These are only a few of the most important players in this epic tale:

The big question that emerges is: Books or TV series, which is better? Of course the books include more plots and characters and allow readers to discover what is in the minds of many of the protagonists of the saga. However, the books are extremely long and many people find more rewarding the shorter and more visual experience of the TV drama. The new twists to some of the characters and plotlines have also been received positively by many followers of Game of Thrones.

However, some changes to the story or sacrifices for technical or budgetary reasons have not pleased everyone. For instance, the underwhelming battle in King's Landing or the surprisingly small size of the armies of Khal Drogo in the TV series demonstrated the limitations of the show. On the other hand, the addition of music and stunning special effects and customs have contributed to make some scenes even more intense and unforgettable than in the books.

What do you think? Join our debate below and vote in our poll. But before that we want to outline the main differences in plot

Watch these videos with an Interview to George R. R. Martin and the official trailer of Season 7 of Game of Thrones

The following part of the debate contains some spoilers, so if you have not watched the series or read the books and are planning to do so you may skip the text below and move directly to the voting section.

Major differences between Game of Thrones books and show

These are some of the most important differences between the HBO TV series and the series of books A Song of Ice and Fire:

If you like the books and the show, check out our debate on the endings of Game of Thrones.

Game of Thrones books and TV show. Which is better? Vote and share your ideas about the books and the series in the discussion forum below. Thanks for sharing it with other fans of Game of Thrones


Differences between Game of Thrones books and TV show. Which is better?