Best fantasy worlds: Lord of the Rings vs Game of Thrones? 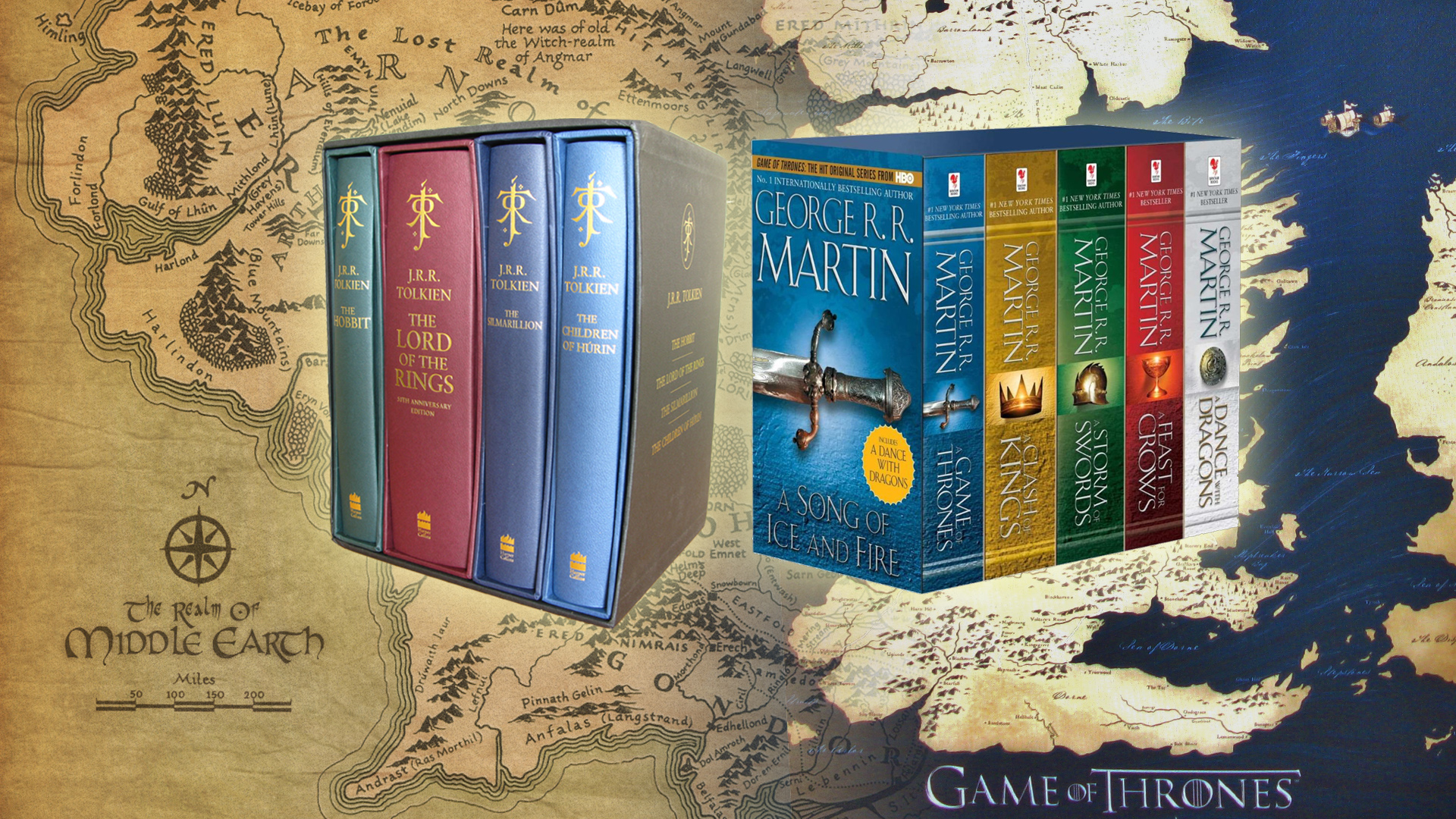 Source: This image was created for netivist.org based on Atin's and Robert's images. If you want to use it you simply need to attribute it by linking to this page or to https://netivist.org. Thanks

Which fantasy world do you prefer - J.R.R. Tolkien's Middle Earth or G.R.R. Martin's Westeros? Lord of the Rings vs Game of Thrones (LotR vs GoT). Tell us why and vote!

Best fantasy worlds: Game of Thrones vs Lord of the Rings

J.R.R. Tolkien's Middle-earth and George R.R. Martin's Westeros are amongst the most famous literary fantasy worlds. Middle-earth was created by Tolkien to host his two most famous novels: The Hobbit and The Lord of the Rings. To some extent inspired by Tolkien and other fantasy authors, George R.R. Martin crafted the world of Westeros for his A Song of Ice and Fire Series. The movies of the Lord of the Rings and The Hobbit, as well as the Game of Thrones TV Series, have contributed to popularize these interesting fantasy worlds.

Tolkien's and Martin's universes are extremely complex and textured. In their books, these authors created histories, mythologies and even languages for their fictional worlds. They designed varied geographies and different religions. Both worlds have magical elements and host many different creatures. Middle-earth is populated with elves, dwarves, hobbits, orcs, trolls, giant spiders, while Westeros has giants, white walkers, the children of the forest and direwolves. And, of course, there are dragons! Help us decide which of the two deserves to be considered the best fantasy world ever crafted.

Tolkien's Middle-earth, middanġeard in Old English, was inspired by the term Midgard of Norse mythology, which was used to describe the land inhabited by humans. Tolkien also used other names, such as Endor and Ennor to refer to the continent in which most of his stories took place. The Middle-Earth is a continent in Arda, the world, situated between Aman, across the Belagear sea, to the west and the Land of the Sun to the east. This continent is inspired by Europe. Tolkien used several locations in England, Italy and other countries as reference. Middle-earth is populated by Elves, Dwarves, Orcs, Ents, Dragons, Hobbits, Humans, and several other races of fantastic creatures. Tolkien developed a complex history, geography and a pantheon of gods as a background for his novels.

Throughout four Ages, the Middle-Earth was the battleground for the struggle between the forces of good, the angelic Valar, and those evil, led by Melkor or Morgoth, a fallen Valar. Elves, Dwarves and Men, with the support of the Istari, powerful wizards, opposed the Orcs and evil men armies led by Sauron, Morgoth's Lieutenant. The British fantasy master created many memorable realms, such as Rohan, Gondor and Lothlorien, as well as other iconic locations such as the Shire, Rivendell, Moria, Mount Doom, Erebor and Helm's Deep. Finally, it is important to note the characters, stories and legends that Tolkien used to flesh out his fantasy universe, most of which were developed in his Silmarillion and Unfinished Tales. Who doesn't remember Galadriel, Gandalf, The Witch King, Tom Bombadil, Bilbo and Glorfindel?

Game of Thrones' Westeros is a continent, roughly the size of South America, which is home to the Seven Kingdoms and where most of the adventures in Game of Thrones books take place. As Tolkien's Middle-earth, Martin's Westeros is also inspired by Medieval Europe. Several powerful rival Houses, such as the Lannisters, Stark, Greyjoy, Tyrell, Lanisters and Targaryen control the continent through a feudal system. Although the American author has not written as extensively about the mythology and history of his fantasy world as Tolkien did, throughout his novels and novellas George R.R. Martin has successfully built an extremely special and ellaborate universe.

The Children of the Forest, a mysterious non-human race were the first inhabitants of the continent. Later the First Men arrived to Westeros, and ruled it for thousands of years until the Andals, men originated from Essos, invaded most of the continent. In parallel, the Old gods that were worshipped by the Children of the Forest and First Men were gradually replaced by the Faith of the Seven and Westeros was fragmented into different kingdoms: Dorne, The Reach, The Stormlands, The Westerlands, The Vale, The North and the Iron Islands. The noble houses that controlled these kingdoms incessantly fought each other and forged unstable alliances. To this already interesting mix, Martin adds Giants, Dragons, and the Others, or White Walkers, a powerful race of undead who inhabit the north of the continent and have the ability turn enemies into wights at their service. The men of the Seven Kingdom built The Wall, a massive ice barrier, and created the Night's Watch order to protect the Seven Kingdoms from the menace of the Others and other men and creatures living beyond the Wall. However, men are not united and civil wars erupt constantly. The obsession to control the Iron Throne may bring doom to Westeros.

Several worlds have emerged from fantasy book series. These are some of the better developed and most popular ones:

Best fantasy worlds: the Middle-Earth or Westeros? LotR vs GoT? Which one do you think has the largest fan-base? Vote and tell us what you find fascinating about these worlds. Thanks for sharing our debate and poll with other fans of fantasy


Best fantasy worlds: Lord of the Rings vs Game of Thrones?


Tags: The Hobbit, The Lord of the Rings, George R.R. Martin, J.R.R. Tolkien, Game of Thrones, A Song of Ice and Fire, Dragons, Best fantasy worlds