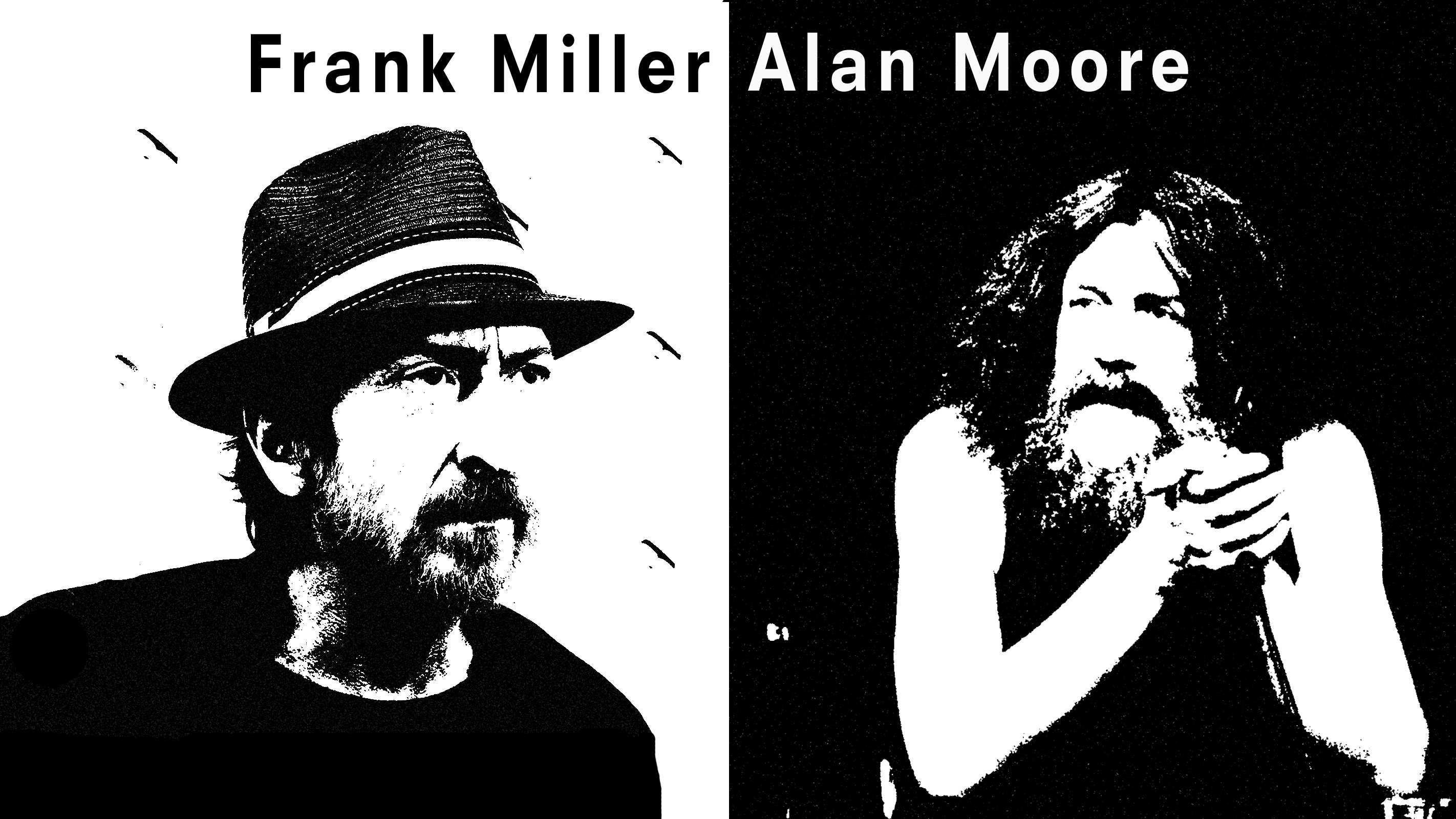 Source: Composite by G_marius based on pinguino k's and Matt Biddulph's images

Frank Miller or Alan Moore? We compare two of the best comic book artists of all times. We owe them some of the most impressive graphic novels ever written for adults. Join our debate and help us decide who is the better author.

Alan Moore and Frank Miller are often described as the most influential authors of the Modern Age of Comic Books. Their work in the 1980s and 1990s contributed to revolutionizing the super hero genre and the history of mainstream American comic-books. Graphic novels such as Alan Moore's Watchmen and Frank Miller's Batman: The Dark Knight Returns radically transformed the way super heroes were portrayed in comic-books. Moore's and Miller's creations have been more nuanced, deeper and aimed at a more adult readership than most of the comics that Marvel and DC Comics had published for decades.

The success of these innovative authors, praised by critics and followed by millions of comics fans, inspired a new generation of comic-book writers and artists. Alan Moore, Frank Miller and a group of some of the best comic-book artists, including Neil Gaiman, Scott McCloud, Mike Mignola, the Hernandez Brothers, and Howard Chaykin, paved the way to the emergence of new comic-book publishers such as Eclipse, Fantagraphics Books, Dark Horse and Image Comics.

We compare these two geniuses and discuss which of the two should be considered the best graphic novel author. We pit Alan Moore's narrative excellence artistry against Miller's raw emotional power.

Alan Moore was born in Northhampton, England on 18 November 1953 into a working class family. His childhood was not easy and his grandmother, a very religious and supersticious person, cast a great influence on him. Moore lost interest in his academic studies and started publishing poetry and essays in different fanzines during the 1960s. In the 1970s he married, had two daughters and became a cartoonist. Initially he used different pseudonyms such as Translucia Baboon, Curt Vile, and Jill De Ray. Then Moore began his contributions to legendary British comic-books magazines such as Doctor Who Weekly and 2000 AD. Moore created popular series such as D.R. & Quinch and The Ballad of Halo Jones.

Alan Moore gained popularity in Warriors magazine where he wrote Miracleman and V for Vendetta. DC Comics saw the potential of the English writer and hired him to write The Saga of the Swamp Thing. His commercial success in America convinced DC to recruit other British writers such as Neil Gaiman, Grant Morrison, Peter Milligan and Jamie Delano. Later on, Moore worked on a couple of Superman stories and Batman: The Killing Joke in addition to the abovementioned Watchmen. From 1988 to 1993, he worked on a series of independent projects with smaller publishers, such as Eclipse and Taboo. From Hell and Lost Girls are some of his most important works from this period.

In 1993, Alan Moore moved back to the mainstream comic industry. He collaborated with several Image Comics series. In 1999 Morore created a new publishing brand called America's Best Comics, which soon after was acquired by DC Comics. The League of the Extraordinary Gentlemen, Tom Strong, Top 10, and Promethea belong to this period. His disatisfaction with the mainstream comic industry make him quit America's Best Comics and DC and undertake new independent projects such as Neonomicon and Providence, both based on H.P. Lovecraft's myths.

Frank Miller is an American comic book writer and artist, as well as a film director, born in Olney, Maryland on 27 January 1957. Miller was the fifth of seven children in a Catholic Irish family. He began his career by illustrating the Gold Key comic series The Twilight Zone. Soon after, in the late 1970s, Miller started to work for the big publishers, Marvel and DC Comics. He did a few small jobs for DC and moved to Marvel where he initially worked as a fill-in and cover artist. Frank Miller started his regular collaboration with Daredevil in 1979 as penciller, and in 1981 he also assumed writing duties. Miller introduced the assassin Elektra in the series and managed to turn Daredevil into one of Marvel's most popular series. Frank Miller drew Chris Claremont's Wolverine mini-series in 1982 and in 1983 and 1984 he created the cyberpunk-samurai series Ronin for DC.

Batman was the next character Miller left his imprint on. He wrote the groundbreaking Batman: The Dark Knight Returns and Batman: Year One, which together with Moore's The Killing Joke and Grant Morrison's Arkham Assylum, turned the hero of Gotham into a much darker and interesting character. Miller also gave a new boost to Daredevil and Elektra by writing Daredevil: Born Again, Daredevil: Love and War and Elektra Assassin. Miller did the front covers for the American edition of the iconic manga series Lone Wolf and Cub.

As some other comic artists and writers, Miller opposed the rating system that the big publishers wanted to introduce in comics. He rejected any kind of censorhip and in the 1990s Frank Miller's major creations were published by the American independent publisher Dark Horse. Hard Boiled, Give Me Liberty, Sin City and 300 were all critically acclaimed graphic novels for an adult audience. During the 2000s Frank Miller worked on the film adaptations of 300, Sin City and The Spirit. His parodic revisitations of the Dark Knight universe, The Dark Knight Strikes Again and All Star Batman & Robin encountered mixed reviews. However, his later work, The Dark Knight III: The Master Race, the first issue of which was launched in November 2015, became an instant success.

Similarly to Moore, Miller is also one of the most awarded comic-book authors of all time. Among other awards, he has won 13 Eisner Awards, five Kirby Awards, and four Harvey Awards.

Both artists also have quite peculiar personalities. Alan Moore and Frank Miller, in spite of dealing with similar themes and having written stories for the same heroes, have quite different political views and have even clashed publicly. Alan Moore declares to be a ceremonial magician with a combination of religious beliefs which are inspired by Qabalah, a range of philosophies and several ancient deities. On the the other hand, Frank Miller is more of a visionary, and not so much a philosopher. He does not care about readers' discomfort and his work is visceral and uncompromising. He has been accused of promoting right-wing ideas. His graphic novel Holy Terror, in which a hero called The Fixer fights against Al-Qaeda, has been criticized for being anti-Islam propaganda. Even Miller recognized that it was written following a propagandistic style.

Both Moore and Miller deconstruct super heroes and are highly concerned with government tyranny. However, their approaches are very different. Moore focuses much more on the weaknesses and flaws of the individual behind the mask, while Miller pays more attention to the trade-off between individual liberties and the common good. Miller's comics tend to be much more violent and his characters less motivated by social justice than most mainstream super heroes.

In 2011, Alan Moore bursted after an attack launched by Frank Miller on his website against the Occupy movement, in which he called them "nothing but a pack of louts, thieves, and rapists, an unruly mob, fed by Woodstock-era nostalgia and putrid false righteousness". Alan Moore, who considers himself an anarchist and wrote V for Vendetta, the comic that largely inspired the symbolism for Occupy and similar activist groups, criticized Miller's work referring to it as homophobic, misogynisic and just completely misguided.

Before deciding who is the best comic-book author, let's revisit the most interesting works from Miller and Moore.

Alan Moore has written dozens of excellent comics. We have shorlisted some of the best Alan Moore  comics:

These are ten of the best Frank Miller comics according to the critics:

Who has contributed the most to the history of comics? Do you prefer Moore's more philosophical style and social critique or Miller's frantic artwork and narratives full of violence and passion? The Brit or the American?

Best comic-book writers: Alan Moore vs Frank Miller. Who is a better graphic novel author? Vote and share your thoughts about these two legendary writers and tell us which of their comics you prefer.