Is Kosher and Halal slaughter too cruel to animals? Should it be banned? 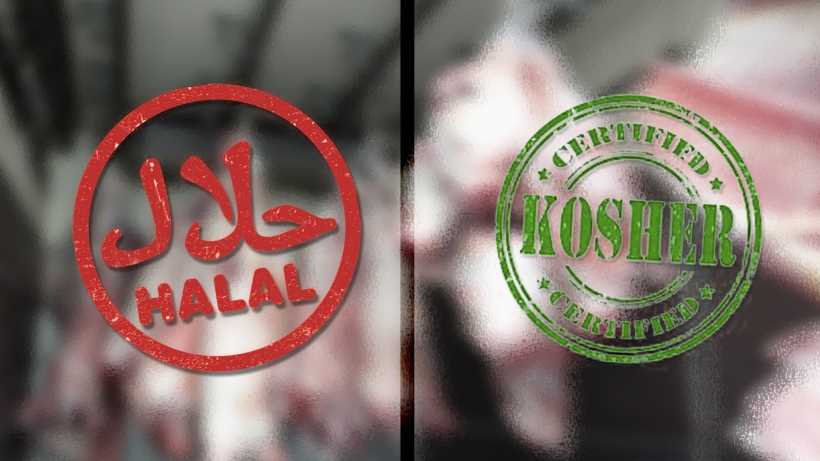 Kosher and halal slaughter is controversial because animals are not stunned before the killing. Should animal rights come before religious practices?

In many countries, the regulation requires slaughterhouses in third countries exporting meat to comply with similar standards to those the country importing the meat. However some communities within EU Member States and the US, for instance, are exempt of following these regulations for religious reasons.

One of the main concern of regulators has been minimizing animal suffering before the killing. For example, in the United States, there is the Humane Slaughter Act of 1958, a law requiring that all swine, sheep, cattle, and horses be stunned unconscious with application of a stunning device by a trained person before being hoisted up on the line.

EU legislation on the killing of animals also aims at minimizing the pain and suffering of animals through the use of properly approved stunning methods.  Regulation in the EU makes mandatory that each slaughterhouse appoints an Animal Welfare Officer who is accountable for implementing the animal welfare measures and requires staff handling animals in slaughterhouses to possess a certificate of competence regarding the welfare aspects of their tasks. An update of the legislation in 2009, has more strictly defined the scope of stunning or killing methods, and provides a minimum electrical parameters. Other technical changes concern the construction, layout and equipment of slaughterhouses such as the lairage facilities or the electrical stunning equipment.

In Muslim and Jewish communities animal slaughter may be controlled by religious laws. Muslim Halal and Jewish Kosher meat requires to the animals to be conscious at the point of death, and as such animals should not be stunned prior to the killing.

For Halal (permissible) food, the slaughter must be performed by a Muslim, who must precede the slaughter by invoking the name of Allah, most commonly by saying "Bismillah" ("In the name of God") and then three times "Allahu akbar" (God is the greatest). Then, the animal must be slaughtered with a sharp knife by cutting the throat, windpipe and the blood vessels in the neck, causing the animal's death without cutting the spinal cord. Lastly, the blood from the veins must be drained.

Jewish law requires that conscious animals are killed by a single cut across the throat to a precise depth, severing both carotid arteries, both jugular veins, both vagus nerves, the trachea and the esophagus, no higher than the epiglottis and no lower than where cilia begin inside the trachea, causing the animal to bleed to death. To avoid tearing, and to ensure the cut is thorough, such slaughter is usually performed by a trained individual, with a large, razor-sharp knife, which is checked before each killing to ensure that it has no irregularities (such as nicks and dents); if irregularities are discovered, or the cut is too shallow, the meat is deemed not kosher. Rabbis usually require the slaughterer to also be a pious Jew of good character and an observer of the Shabbat.

Animal rights organizations and advocates in Western countries are demanding to put an end to the killing of animals under the religious method described above. They regard the process as cruel, as animals may not lose consciousness immediately and have called for these methods to be banned.

In February 2015, the Danish government banned the religious slaughter of animals for the production of halal and kosher meat. This law proposal received many criticisms. Legislators were accused of “anti-Semitism” by Jewish leaders and “a clear interference in religious freedom” by Muslims groups. The minister for agriculture and food Dan Jørgensen responded to criticism of the law by claiming:

Despite this claim, many in the Jewish and Muslim communities perceived the measure as an act against these religions because, they say, in Halal and Kosher methods the slaughter will have been conducted in a humane and swift manner. In addition, other methods of producing animal food also perceived as cruel are allowed in the EU as is for example the case of foie gras in France. Also in Denmark’s Faroe islands, where they have laws that are independent of Denmark's laws, the traditional annual whale and dolphin slaughter is still permitted.

What do you think? Should animal rights come before religion? Is banning kosher and halal slaughter a logical step? Do you think that ethnic and religious preconceptions are obscuring the debate? Do you see similarities between this case and the burkini ban controversy? Is this an example of Islamophobia and anti-semitism?

Is Kosher and Halal slaughter too cruel to animals? Should it be banned? Vote and explain why or why not.


Is Kosher and Halal slaughter too cruel to animals? Should it be banned?