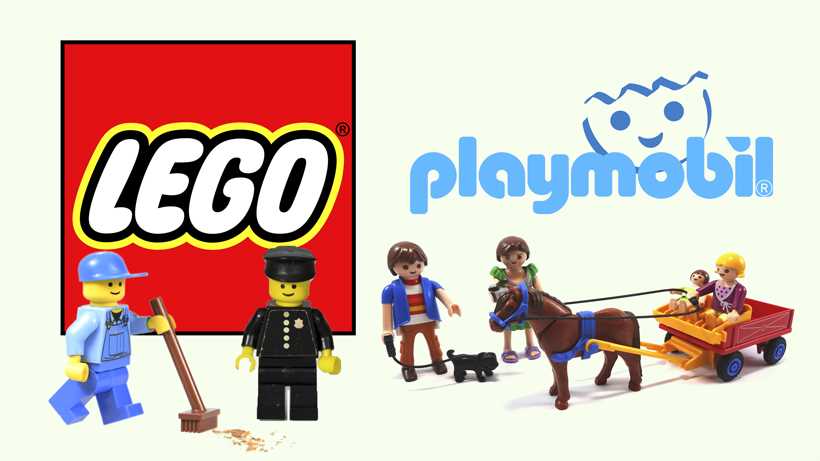 Lego vs Playmobil: find out which is the best toy for kids. We compare these famous brands and discuss Lego and Playmobil's pros and cons. Would you say these are the best toys ever?

Playmobil and Lego are two European toy manufacturers which have developed a strong rivalry over the last four decades. Both the Danish and German companies produce solid plastic figures, buildings and building blocks, vehicles and accessories but each of them has a very particular ethos and a legion of devoted fans which continue collecting them during their adulthood and pass their love for the brand to their children. Toys are central to our early lifestyles. Choosing between Lego and Playmobil is similar to choosing between PC and Mac, Android OS and iOS, or Nike and Adidas. These consumer choices, often influenced by our families and friends, contribute to define the personality we project. We tend to develop a sense of loyalty toward the toy brands we used to play with during our childhood and recommend them to others. Let's compare Lego and Playmobil, outline their pros and cons and decide collectively which of the two deserve to be considered the best toy for kids.

Lego comes from the Danish leg godt which means "play well." The Lego Group is a Danish company which started in the workshop of a carpenter from Billund, Ole Kirk Christiansen in 1932. By 1949, the famous plastic interlocking building bricks replaced the wooden toys. The motto of the group "the best is never too good" shows the obsession of Ole Kirk to continuously improve the quality of the toys produced. By 1969 the group launched the Duplo product line for younger kids and in 1978 the first minifigures were introduced in the lego sets. From this point on the direct competition with Playmobil became apparent.

Lego is usually considered the best construction toy. Today there are Lego factories in many parts of the world, including Denmark, Hungary, Mexico and the Czech Republic. Lego operates 125 retail stores. By 2016 more than 600 billion Lego parts have been produced worldwide. 2015 was a record year for the brand with sales jumping 25% to $5.3 billion and reaching 100 million children worldwide.

Lego fans can also enjoy the Legoland amusement parks. After the original opened in Billund, Denmark, five others have been opened in England, Germany, California, Florida and Malaysia. The series of Lego video games, more than 60 different titles since 1997, board games, as well as animation TV series and films have contributed to the transformation of the toy brand into a global phenomenon.

Moreover, famous movies and book licenses have also been turned into Lego toys. For instance, Disney princesses, Harry Potter's wizards as well the Lord of the Rings and Star Wars heros have all been turned into Lego figures. In 2015 Lego replaced Ferrari as the most powerful brand in the world, according to the global consultancy Brand Finance. In 2016 Lego fell to second place and was replaced by Walt Disney as the top brand in the world.

Watch this animation video about the history of Lego:

These 7.5 cm tall plastic figures with a smiling face have been produced by the German Brandstätter Group since 1975. Hans Beck a German inventor who is considered the "father of Playmobil" spent three years, from 1971 to 1974 conducting research and testing the prototypes of what quickly became one of the most popular toys in the world. The idea behind Playmobil was always to provide a plastic toy with flexibility enough to stimulate children's imagination without making it overly complex.

Playmobil has more of a timeless image and has not relied on external trends as much as Lego. Their strategy has been not to purchase popular licenses, but to make parents find toys for their kids similar to those they used to play when they were children.

Playmobil was a quick success and was licensed and distributed through local manufacturers in Latin America and Europe, such as Famosa in Spain, Lyra in Greece, Louis Marx and Company in the UK, and Antex in Argentina. Mattel and Schaper introduced Playmobil in th US in the 1980s. Today the main Playmobil factories are located in Germany, Spain, Czech Republic and Malta and they are exported all over the world. The group employs more than 4,000 people, half of them in Germany. More than 100 million figures are produced each year. The Brandstätter Group celebrated the 40th birthday of Playmobil reporting worldwide sales growth of 4% to €552 million in 2014.

Playmobil lovers can enjoy a variety of entertainment products linked to the brand. There are 5 FunParks (Playmobil amusement parks), 2 animated films, one animated TV series (Super 4), and 8 video games based on the popular toys.

Watch this video about the history of Playmobil:

Best toy for boys and girls?

These games have been widely considered good for the education of children. Lego and Playmobil have several advantages and disadvantages you may want to consider before making up your mind about them:

Hot questions: Do you prefer the slighly bigger playmobil figures or the flexibility provided by Lego's building blocks? Can Lego or Playmobil be considered the best toy ever? Which of the two did you enjoy the most during your childhood? Which set did you love but never manage to own during your childhood?

Lego or Playmobil: what is the best toy for kids? Vote and tell us more about your memories playing with this toys or the experience of your children. Share also your favorite Lego and Playmobil sets