Technological unemployment: Is technology destroying jobs or creating them? 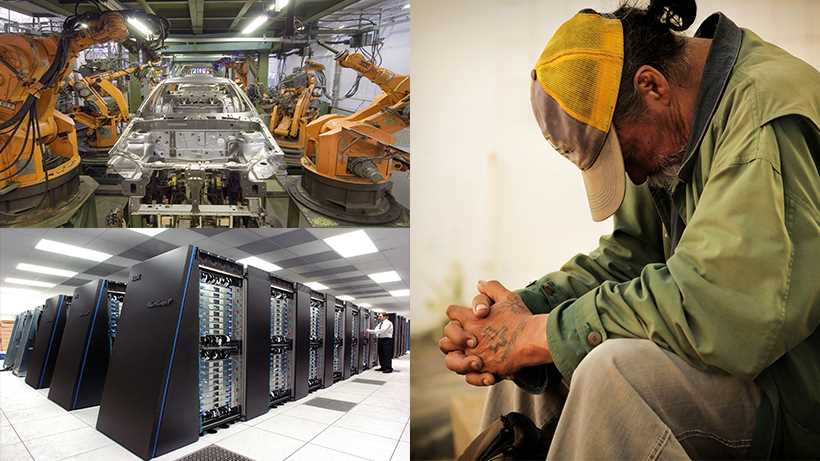 We discuss the difficult relationship between technology and unemployment. Are machines taking over our jobs? Are workers made obsolete by artificial intelligence and robots? Or is the impact of technology and innovation positive for the labor market? Join our debate and vote (below)

Paul McNeil is a technology analyst specialized in the political and moral perspectives of today’s innovative world. He has a worked as a news writer and TV anchorman and published articles in several websites including Newsmax, The Hill, ArabNews, American Thinker, Canada Free Press and TechMoralitics. You can folllow Paul McNeil on twitter (@mcneil_lfc)

Searches on Google, finding friends through Facebook, amazing apps on our even more amazing iPhones, rants on Twitter and being able to buy simply anything on Amazon have all been made possible thanks to major leaps forward in technology over the past 15 years. However, at what price?

As our lives are gradually automated, many people are losing their jobs. The concept of technological unemployment refers to a structural increase in unemployment caused by technological change. The introduction of mechanical-muscle or labor-saving machines, as well as computerized or mechanical-mind processes, may reduce the need for blue and white collar workers. While new technological advances make our lives easier and pave the way for new job opportunities, does the math add up to render a growing economy? Or are the super-rich just getting richer, and the working classes losing their jobs due to technological change?

Technology taking over jobs
Advancing technology has not delivered jobs as it should. At the end of 2015 a total of 74,505 employees were working for Google’s Alphabet and Facebook, comprising to less than a third of Microsoft's total staff. However, the combined stock-market value of these companies was twice as big as Microsoft's. Remember that Facebook acquired Instagram back in 2012 at a price of $1billion when it only had 13 employees. As companies began to shift hardware production factories outside of the U.S. there was less need to hire workers, and newcomer tech giants in the market are in need of even fewer workers.  The phenomenon of machines replacing ordinary human beings at low or medium wage jobs has gone into high gear. Artificial intelligence is also taking over many white collar jobs.

Americans disappointed
Ordinary workers in America were encouraged by the economic boom of the 1990s. Then U.S. President Bill Clinton, in his last State of the Union speech in 2000, promised his country would “lead the world toward shared peace and prosperity, and the far frontiers of science and technology.” What we witnessed was anything but that. As the U.S. led the charge in the “war against terror,” it brought devastating political and social impacts across the globe. In the economic sphere, there was no sign of the “rapid technological change” to help the U.S. economy grow. The tech economy in America suffered painfully from the 2001 recession and the growing globalization trend that saw jobs shifting across the waters. Despite their 1990s rise, computer and electronic firms began laying off their workers, plunging from 1.87 million in 2001 to 1.03 million now in 2016. In this same period semiconductor manufacturers slashed their number of workers by half to just 359,000. Was this rise in unemployment due to technology and innovation?

British woes
Concerns from the other side of the Atlantic are also on the rise, as experts indicate in the next 20 years 35 percent of British jobs are on the verge of being eliminated as a result of technology advancing in computing and robotics. This means a wipe out of over one in three roles in the UK’s already troubled economy. Most likely to go are repetitive positions that earn low-pay. Those living on an income of less than £30,000 a year are much more likely to lose their jobs; five times so, to be exact, in comparison to those earning £100,000.

China taking advantage?
One very specific case of tech companies shifting jobs overseas can be seen in Micron. Up to 2013 this firm was employing 11,300 workers inside the United States, already down from 14,000 back in 2000. However, there was an immediate surge in the company’s non-American workforce from 4,800 to a whopping 19,600, mainly located in China and other Asian countries with cheap labour. That is a near 400% increase. The U.K., too, has lost its share of jobs. With China pouring cheap steel into European markets, thousands of British workers are losing their jobs as their companies cannot cope with the rivalry and are forced into major layoffs and eventual shutdowns. Other reports indicate 159,000 manufacturing jobs across the U.K. were lost in the span of just three months up to September. While this section of British economy was booming just recently, the job numbers have sunk to 3.6 million, setting a record low.

Does technology create jobs?
Despite major concerns about the future of jobs and the economy in general, 140 years of data has shown technology as a whole has actually brought to life more jobs than it has ended. Technology has been described as a “great job-creating machine,” according to economists at the Deloitte consultancy. For instance, while roles in the agriculture, washers and launderers, examples of repetitive services, have decreased, there has most definitely been a rise in caring posts, such as teaching, educational support assistants; welfare, housing, youth and community workers; and care workers and home caring.

Experts arguing that technology creates jobs believe the media has been biased in skewing attention towards robots taking over our jobs and exaggerating by portraying the future as similar to a science-fiction movie where our lives will eventually be controlled by machines.

Final thoughts
Employment in general, and especially in computer and electronic firms, rose significantly in the 1990s. Those numbers have dropped drastically-as much as 40 percent in some cases-despite a smaller number and more technical type of jobs being born in other branches.

The aging battle between man and machine will continue as it has for centuries. The question is "are machines taking over our jobs, or is our workload being eased by their presence?" This will be an ongoing debate especially with the current rise in machine learning technology and artificial intelligence.

Is technology destroying jobs or creating them?

This is a summary of the most commonly advanced arguments on both sides of the debate. On the one hand, some experts argue that technological unemployment overshadows the stimulating effect of innovation in the job market. On the other, some analysts emphasizes that although technological change may disrupt the labor market, its effects are positive overall:

Watch this debate: "Technology and Jobs: Should Workers Worry?" organized by the Milken Institute

Emerging questions: Does technology cause unemployment? Is technological unemployment a blessing in disguise? Will robots take over our jobs? What will the jobs of the future be like?

Technological unemployment: Is technology destroying jobs or creating them? Vote and tell us why. Please invite to join our debate anyone concerned with technology and unemployment


Technological unemployment: Is technology destroying jobs or creating them?