Ethical eating: is it wrong to eat meat? Is veganism the only moral option? 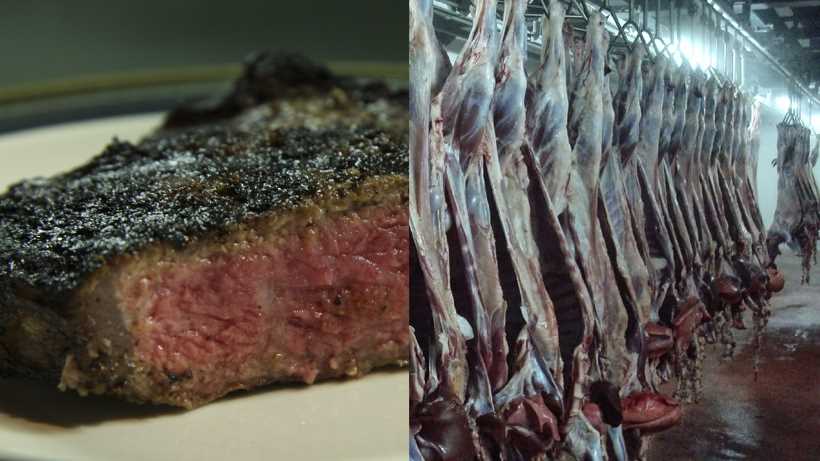 Source: Composite image by G_marius based on Mike's and School of Veterinary Medicine and Science University of Nottingham's images

Is eating meat wrong? Can animal suffering be justified? Are eggs and diaries another form of animal exploitation. We discuss the the meat industry cruelty, the pros and cons of veganism and vegan ethics. Watch the very interesting videos below and join us and share your views if you are concerned about this issue.

Is it wrong to eat meat?

There is a joke that goes: 'How do you know if there is a vegan at your dinner party? ... They will be sure to tell you'. Although the indignant self-righteousness of many vegans alienates many, it's sometimes hard to formulate a robust defence of meat eating which has become questionable from an ethical perspective. After all, the concept of killing and eating a human is likened to severe mental disorder and cruelty. Even the prospect of eating dogs or cats would disgust many. So how is it that people generally do not think twice when eating ducks, cows, pigs and chicken? It seems as though the selection of animals for our plates is arbitrary.

Humans are omnivores and through history have obtained from animals fat, proteins, vitamins and many necessary nutrients for survival. However, today, an increasing number of people question if humans were meant to eat meat. We know that animals have feelings, and the cruelty to animals in the meat industry is a widespread phenomenon. Some methods of animal sacrifice in abattoirs, such as Halal and Kosher methods, are viewed as particularly cruel. Why should humans eat meat eating animals clashes with our moral convictions? Most people argue that eating meat is natural and that there are ways to minimize animal suffering without having to abandon meat and fish. But the debate on ethical eating is even more complicated. For some people stop eating meat is not enough. Vegans, unlike vegetarians, also reject the consumption of eggs and dairies. They consider that the methods humans use to obtain diaries and eggs are also cruel to animals and an unatural way of exploitation.

Watch this video about the debate on veganism

The dilemma posed by vegans is this: if it is an evil act to keep humans against their will for their produce and ultimately flesh, then what makes some animals so different? The most intuitive response is perhaps that eating meat is simply custom in our society. The vast majority of us are brought up with it, and the option is always available for us in supermarkets, restaurants and cafés. Also, certain meats are associated with particular cultural traditions, imbedding the custom of meat eating more and more into our identity as a society. However, it is an uncomfortable thought to think that our only justification is because "other people do it". After all, there is a long and tragic history of social norms that are later seen as barbaric. There are of course alternative defences. Perhaps the most interesting is that humans are not alone in their meat eating. Carnivores are found in all manner of environments, and require the meat of other animals to survive. However, for many in the west, the option not to eat meat is a feasible one, even if the same option is not available for many in the developing world.

Finally vegans bring their concern to a higher level than vegetarians. The latter do not consume meat either but find defensible the consumption of eggs and dairy products. For vegans these products are also causing animal exploitation and suffering and therefor are kept out their eating habits. The way hens and cows are usually treated in farms poorly fed and with bad little room to move makes questionable the consumption of dairy products and eggs.

Veganism is still controversial. Many claim that it is enough to be vegetarian question if a vegan diet is healthy. We outline here some of the main pros and cons of being vegan:

What do you think about vegan ethics? Are they being overly cautious? Should meat eating people feel guilty of the unnecessary cruelty imposed on animals? Are dairy products and eggs that bad for animals or the environment?

Ethical eating: is it wrong to eat meat? Veganism the only moral option? Is meat eating simply natural? Is it still fine to eat eggs and dairy products? Vote, debate and comment below!


Ethical eating: is it wrong to eat meat? Is veganism the only moral option?