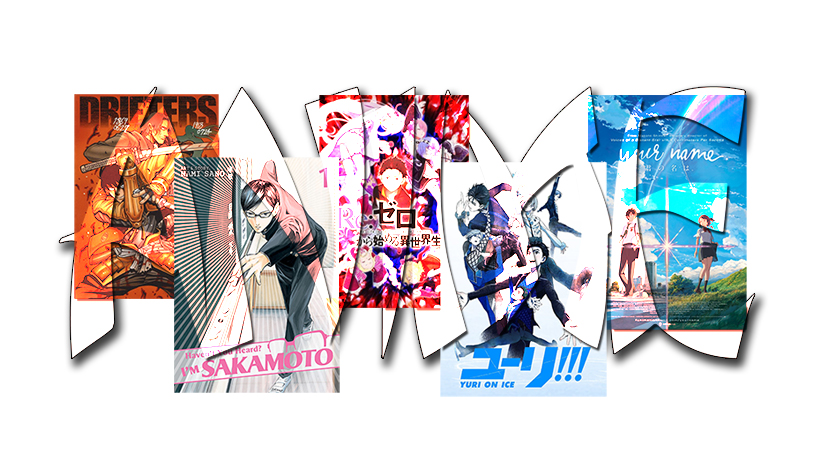 Anime and manga fans have good reasons to be happy. Many great anime series were released in 2016. The variety of shows demonstrates the innovative character of the industry and how it succeeds in continuously adapting to the times. Anime is a growing form of entertainment not only in Asia, but also in the West. There have been good fantasy, horror, action, romantic and comedic  new shows. This manifestation of Japanese pop culture continues to grow also in the West. We have shortlisted some of the most notable shows and would like to know which is your favorite one and why (see poll and discussion forum below).

Drifters is a fantasy anime based on a manga which follows Shimazu Toyohisa, a samurai who finds himself transported to another world right before his imminent death from blood loss after the Battle of Sekigahara. It is perfect for those who love a mixture of historical and science fiction, replete with gore and bloodshed!

This anime series depicts the life of Sakamoto, a prodigy student whose abilities attract an unwanted amount of attention from people around him. The comedic take on his abilities finds him in absurd situations the audience will definitely find baffling!

This is series that will fantasy-buffs will enjoy. Subaru Natsuki finds himself summoned to an alternate universe where he meets a half-elf. Soon along the way, he acquires mysterious abilities that grant him the power of resurrection. If you believe that this is a worn out theme, you will be blown away by the many twists-and-turns in the series.

This is the more realist among the top anime series of 2016. Yuri on Ice that follows two male figure skaters attracted to one another, Yuri Katsuki and Yuri Plisetsky. However, this is perhaps a tangential plot to the overarching narrative of competition on the skating rink.

Your Name (Kimi no Na wa)

Your name is not a series but a drama film, but we have included it in our list of best animes of 2016 not only because of its quality, but also because it has become the top-grossing anime film of all time. It shows two high school students who experienced a transcendental exchange of bodies. They dream of waking up in each other’s bodies and going about the other’s life. The story continues to explore how a romantic attraction is developed between them despite the many barriers separating them. It is as heart-wrenching as it is a refreshing take on a coming-of-age genre.

Other top anime series of 2016

​In addition to the top 5 anime shorlisted above, we wanted to invite you to consider also other options:

Do you think any of the shows released in 2016 will become in the long run a classic and one of the best anime ever? Which is your most anticipated series for 2017?

What is the best anime series of 2016? Vote and explain why one of the anime series above should be considered the top one. Please add on the discussion forum below any show that you think should be added to the list