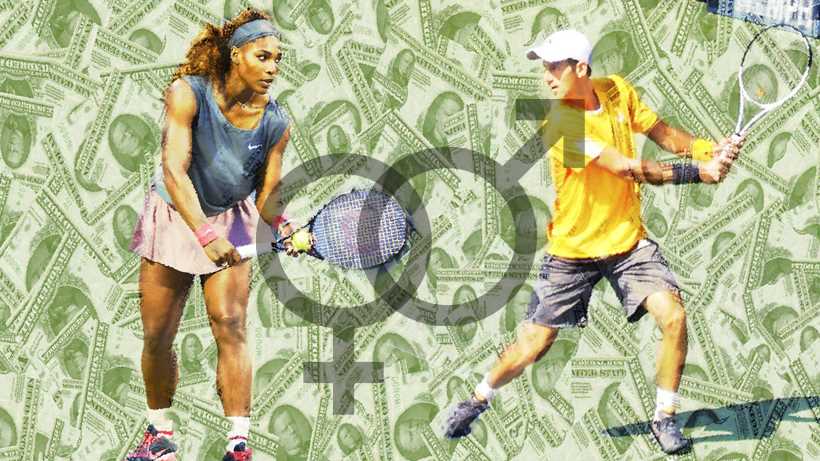 To what extent does gender inequality in sports remain a serious problem? Is the gender wage gap justified? Do female athletes receive equal pay for equal work? Learn more about the history of women's sports, the top earning athletes, gender equality in tennis and other sports, and the main reasons used to justify the gender pay gap in sports.

Are women discriminated against in sports?

There have been always gender issues in sports. We all accept the principle of equal pay for equal work, but there is evidence that the wage gap between men and women is still important in sports. Professional athlete salaries vary significantly across gender. Feminists argue that gender biases are limiting the opportunities of women in sport and also creating an environment in which it would be very difficult to reach gender parity in terms of salaries. Today we discuss if there is gender equality in sports or if gender discrimination is still an issue we should all be concerned with.

Women have engaged in athletic events since ancient times, but traditionally separated from men. The Haeraean Games, dedicated to the Greek goddess Hera, are the first recorded women's athletic competition in history. They were held at the same stadium as the Olympic games at Olympia. There is also evidence of women's sports competitions in Roman times. In ancient China, women also played in professional teams of Cuju, a competitive ball game which involved kicking a ball.

Since the late eigteenth century physical education for girls was gradually introduced and this contributed to lead women to sports. Physical education was previously reserved for boys and men and mainly aimed at prepare them for battle. Germany was one of the countries pioneering women's sports. However, until the early twentieth century few women competed in sports in America and Europe.  Although they allowed to participate in sports, female athletes usually suffered social disapproval and prejudices.

The modern Olympics allowed female competitors from 1900 onward. Gradually more women competed and some sports previously considered "for men only" started to organize competitions for women. Although many of the early women's professional sports leagues failed due to lack of spectator support, women's sports grew in popularity throughout the twentieth century. State-sponsored athletic programs help expanding women's sports.Scandinavia, Germany and Communist countries demonstrated the effectiveness of this programs.

It is widely recognized that sports have strongly contributed to the women empowerment and emancipation. However, the battle for gender equality in sports continues in the twenty-first century. Media coverage still favors men's sports. The budgets for male and female teams in sports clubs and for college sports scholarships is often very unequal. Commercial sponsors tend to invest more in male athletes than in female athletes. Myths and prejudices against women in sports persist in the public discourse. But how serious is the problem? Are the discrepancies today in terms of pay something that reflects a particularly entrenched gender discrimination?

According to Forbes' list "The World's Highest-Paid Athletes 2015", only 2 women were listed among the 100 best paid athletes, tennis players Maria Sharapova (#26) and Serena Williams (#47). In  2017 the situation seems to have worsened as only one of the top 100 highest-paid athletes is a woman. See the comparatives below:

Tennis is the sport in which women are better paid and one in which the gap between male and female salaries and winnings is not that wide. The most important tennis tournaments, such as Wimbledon, Roland Garros, the USA Open and the Australian Open make sure than the prizes are not very different in the male and female competitions. Forbes publishes a  list with the "The World's Highest-Paid Female Athletes 2015", 7 of the 10 best paid women athletes played tennis. The auto racer, Danica Patrick (#5, $13 million in earnings), ice skater Kim Yuna (#7, $9 million) and golfer Yani Tseng (#10, $6.1 million) complete the list of the best paid women in sports.

Interestingly, tennis is the one discipline were men and women have the same prize money in big events such as Grand Slam titles and some Master 1000. However, The top 10 male tennis players earned $65 million in 2015, whereas the top 10 female tennis players earned $42 million. But the difference is concentrated on top players (male top four: $45 million, female top four: $23 million). Players ranked between the 5th and 10th position earned very similar prize money in 2015.

Watch this video with some striking remarks on the issue of wage gap in tennis:

Gender inequality in other sports

Many consider, notheless, that tennis is an outlier and that the problem of gender discrimination is much worse in other sports. Basketball seems to be a very different case. There is an extremely important salary gap between WNBA and NBA. Even taking into consideration the revenue generated by each of these leagues, professional female basketball players earn less. WNBA player salaries represent 33% of the revenues of the league, men's salaries reach 50% of NBA total revenues. An average WTA player earns around $75.000, a male player earns around $4 million!

In football (soccer) there seems to be the greatest disparity For instance in 2014 Arsenal won both women's and men's FA Cup in England, and while Arsenal Ladies were given £5,000 for their victory, men recieved  £1.8 million. Marta Viera is the best paid female player, with $400.000, far from the $50 million Ronaldo or Messi are earning. In endurance cycling gender inequality has been an issue too. A male cyclist in the Union Cycliste Internationale (UCI) is allocated a minimum wage annual base salary. In 2011, when asked if women also deserved a minimum wage, UCI President Pat McQuaid replied "I am not sure. Women cycling has not yet developed enough." In 2013 survey showed than 50% female cyclist were paid $3,000 or less a year. There are many other sports, including cricket, squash or golf, which pay prize money that rewards female athletes less than their male counterparts.

Reasons for unequal pay in sports

These are some of the arguments used to justify unequal pay for women in sports as well as some of their caveats and counter-arguements.

Is it fair that women receive less pay for equal effort in sports? Is there gender discrimination agains female athletes or is the pay gap mainly justified on economic or other "rational" considerations? Is there a need to erradicate gender bias in sports or these are just myths? Vote and join the debate (below)

Video with some explanations on the current pay gap between male and female athletes:

Gender inequality in sports: are professional athletes salaries fair for women? Vote and tell us if you think there is gender discrimination against women or if you find normal the wage gap in sports.