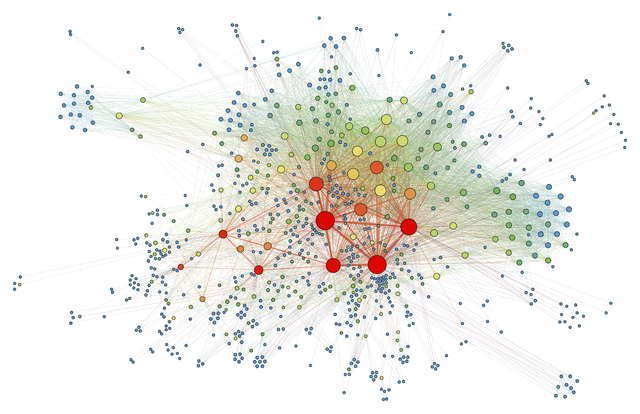 Most people engage in social networking on a daily basis. But do the benefits of social media really outweigh their disadvantages? Do they benefit us?

Social networking on the Internet

We owe much to the development and expansion of the Internet. It has enabled one of the main technological and cultural revolutions in recent history: the emergence of social media. Over the last 10 years, online social media have grown extremely fast and become central to the lives of hundreds of millions of people. Social platforms such as Facebook, Twitter, WhatsApp, Pinterest, Instagram, and Google Plus allow us to communicate with family, friends, and people that we would have never had the chance to meet regularly. Some social media such as LinkedIn, Skype, Slack and Meetup are becoming important tools for our work and business networking. To the extent that many cities are  offering free public WiFi to their citiezens. However, although many people spent considerable part of their lives interacting with social media, others refuse to engage with online social networking. Let's dissect some of the benefits and dangers of social networking.

The advantages of social networking

Social networks allow us to keep in touch with people that we meet at different points in our lives and reconnect with old friends that we may have not seen in years for various reasons. Online social media help bridge previously insurmountable physical distances. Before Facebook, it was difficult to follow what your friends were doing. You could write emails, and before that letters, but the sense of proximity that people get by reading comments and things friends share and seing their pictures on the social media is something never achieved before. Instant messaging services, such as Whatsapp, and conference call software, such as Skype, add to this new feeling of proximity with people that may be leaving thousands of miles away.

Social networks offer their users the capacity to get almost immediate access to information about things happening elsewhere. When something important happens in the world people often find out almost immediately through social media. Just by spending five minutes on your Twitter, Facebook or Reddit feed you can learn about global social, cultural and economic events and trends. They even allow to shame the politicians and other people that have done or said something unethical or wrong.

These platforms also allow for global interaction with people from different backgrounds. Before social media, interacting with people from distant places was almost exclusively the privilege of those who could afford travelling. Now through social networking sites we often engage in discussions and can establish friendships with people very different from us. Some social media even facilitate people meeting face-to-face. For instance, networks such as Couchsurfing allow you to live for some time with people you might have otherwise never met. Likewise some social networks specialized in dating help people meeting others and often establish long term relationships.

Thanks to the social networks some people and small companies can gain visibility for their products and creations without having to invest much in advertising. Social networks can also very effective ways to find a job, a business partner or an employee.

Finally, social platforms, such as netivist, help to promote public participation and civic engagement. People have new means to express their views and defend causes they find worth fighting for. Protest movements around the world, such as the Arab Spring, the Occupy Movement and the European Indignados employed social media for the mobilization and organization of protesters. At the same time, the use of social media, such as Twitter or Reddit, by Obama during his campaign for the White House is a good example of how politicians and citizens can interact more directly to the benefit of political participation and democratic processes.

The limitations and dangers of social media

However, social media may also have  some negative effects on our lives and the way people interact. First of all, it is argued that social media may insulate us from the people that surround us. Although these platforms make communication easier and more flexible with those far away, they can have the opposite impact on our relationships with the people we live with. Who has not been in a family or friends' reunion, where everyone is just looking at their smartphones or tablets rather than speaking to each other?

Social networks serve to disseminate information, but the validity of this information cannot always be verified. Thus, social media can be used to spread rumors, propaganda, and misleading information, now often referred to as "post truth" or "alternative facts." Sometimes this information can have negative impact on the lives of people. Apologies and rectifications tend not to reach as many people and travel as fast as flashy erroneous information. Harm is not always undone or compensated.

Social networking distracts us. Social media have become a source of entertainment but also a means of procrastination. With people often checking Facebook, Whatsapp, or Twitter every five minutes, it is likely that their productivity at work diminishes. We are constantly bombarded with notifications from social media. Many of them are of no use to our lives. Worse even, in many cases social media may turn into an addiction or obsession with negative psychological impacts on our lives.

Privacy is also at risk because social media. Pictures and videos of everyone are circulating through the internet. Even if we try to be careful, there is no way we can prevent other people from posting pictures of us or our families on Facebook, Twitter or other social media. How many times have you found yourself removing a tag from a somewhat inappropriate picture taken at a party? Social media are also making it more difficult to separate our professional and social lives. We end up being "Facebook friends" with colleagues, and in some cases this may backfire. Police surveillance and social media monitoring by governments may also make you feel uncomfortable.

Social media platforms store too much information about us. Potentially this information could be used by governments and corporations to control us. Most networking platforms extract large amounts of information from their users. It is difficult to understand the terms and conditions of use of the platforms, usually captured by long and extremely technical legal documents. Moreover, this information collected about us is not always secured. There have been notable cases in which hackers have managed to steal information about thousands of users.

Finally, these platforms have become fertile grounds for offences and crime. Many people suffer stalking and bullying through social networks. This has led to dramatic cases where users have ended up committing suicide. Social networks have also been used to collect information about victims by kidnappers and burglars. Many terrorist organizations recruit members and raise funding through social media.

Watch these videos contrasting the pros and cons of social media:

We summarize the main arguments in favor and against social media and online networking:

Social networking has drastically changed our lives. These platforms offer many advantages but also have some downsides. Do you think their impact is overall positive or negative for society? Are they beneficial or detrimental to our social lives?

Social networking pros and cons: Do social media make our lives better? Vote and explain why or how do you think they affect your life. Invite others to join and help us making this discussion more interesting