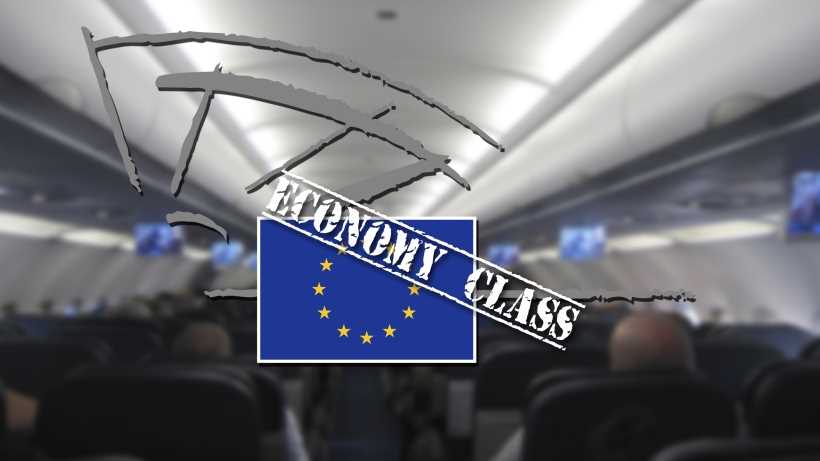 Source: Fictional composite by G_marius based on a Christopher Doyle's image

Europe is emerging from a long financial crisis that has left many citizens in poverty. While social spending has been reduced to deal with the crisis, elected officials have continued to spend public money superfluously. One clear example of this is when members of the European Parliament (MEPs) and National MPs fly in first or business class. MEPs actually rejected on 2011, in the midst of the crisis, a call to travel economy class. We ask the Members of the European Parliament and the Members of the National Parliaments of the European Union to look after taxpayers’ money responsibly and end their privilege of travelling business or first class.

Millions of European citizens are still suffering the consequences of the financial crisis that has affected Europe since 2008. High unemployment rates in many countries and spending cuts in crucial social services and benefits across the continent, have left many Europeans in a very precarious condition. Reverting to the situation prior to the financial crisis is going to take years if not decades.

The economic crisis has also shown us the importance of public finances that are well looked after. In the recession, health, education, social services were among the first to suffer from severe spending cuts precisely when they were more needed. While other superfluous expenditure remained pretty much unchanged. In addition, we have seen in Europe millions of taxpayers’ euros lost to unnecessary projects and infrastructure and corruption.

According to the European Parliament, upon presentation of the supporting documents, MEPs are reimbursed the actual cost of their travel tickets for attending meetings in Brussels and Strasbourg, up to a maximum of the D business class (or similar) air fare, the first class rail fare or €0.50 per km for car journeys (up to a maximum of 1,000 km), plus fixed allowances based on the distance and duration of the journey to cover the other costs of travelling (such as motorway tolls, excess baggage charges and reservation fees).

MEPs earned a monthly pre-tax salary of € 8,020.53 in 2014. They have a general expenditure allowance of € 4,320 per month, other travel expenses up to a maximum annual amount of €4,264 for activities outside their Member State of election and the Parliament pays each of its 751 MEPs a flat-rate allowance of €306 per day in 2015.

Members of National Parliaments in Europe tend to have lower incomes than MEPs but it is well above the average income in their countries.

We consider that the public should only pay for an Economy ticket when they travel. Should Member of Parliament wish to travel first or business class, they are more than welcome to pay the difference from their own pockets.

Signing this petition is anonymous. Only if you comment will it appear on the the discussion forum.