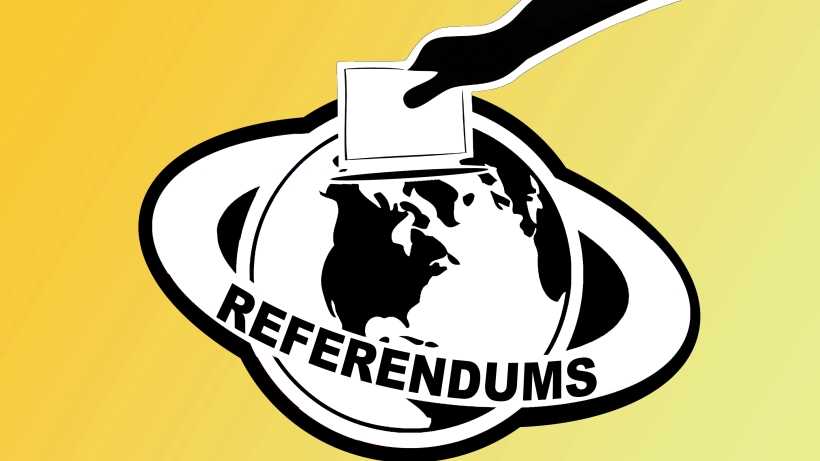 Referendums are tools for direct democracy. But their effectiveness as expressions of democratic values is often questioned. We discuss what is direct democracy and outline some of the most important referendums. Join our debate and vote in our referendum on referendums!

Referendums are general votes by an electorate on a question with an usually dichotomous answer: "yes" or "no". They are exercises of direct democracy. Many countries use plebiscites to legitimize previous decisions by political representatives or simply to consult their citizens on divisive issues before launching a specific policy. These referendums are also an instrument in the populist toolkit.

The Scottish independence referendum on 18 September 2014 and the EU Brexit referendum on 23 June 2016 are the best known recent examples of ballot questions employed to decide on issues of vital importance for a country, in this case for the United Kingdom. These are not the sole referendums in the history of Britain. There have been two previous UK-wide referendums and several referendums in which parts of the country were invited to vote. In 1975 the UK approved by ballot question the membership of the Economic European Communities, and in 2011 the introduction of an Alternative Vote electoral system was rejected through a referendum. However, overall referendums by tradition are extremely rare in Britain.

Outside the UK there have been a number of important referendums around the world. On 1 October 2017, there was a referendum for the independence of Catalonia. Although this referendum was considered illegal by the Spanish Constitution and most international organizations and countries, it brought back the attention to the utilisation of direct democracy. Some consider it as a tool for the emancipation of the people and a way to involve citizens in political decisions. Others claim that referendums are populist instruments as they over-simplify issues and polarize societies.

Most consitutions and constitutional reforms are validated by a referendum. Additionally, several secesion processes have also been initiated or ratified by a direct popular vote, such as the referendums for the separation of Czech Republic and Slovakia (1993), for the independence of Eritrea (1993), East Timor (1999), Montenegro (2006), Quebec, and Crimea (2014). There have been also referendums for devolution of powers to regions (e.g. Scotland, Wales and Greenland), for membership in international organisations such as the EU (e.g. Poland and Hungary) and NATO (e.g. Spain), for the legalization of abortion (e.g. Portugal and Ireland), as well as for a variety of other political questions of general interest.

Switzerland's political system is well-known for being the most open in the world to the celebration of referendums and public consultations. Swiss citizens can demand binding referemdums at the local, cantonal or federal level. The government is forced by the constitution to organize these plebiscites if the have gathered enough public support (100,000 signatures). The Swiss political system has hosted so far near 600 referendums including some highly controversial referendums such as those for the introduction of a universal basic income (2016), the expulsion of foreigners convited of even minor offences (2016) and the prohibition of islamic minarets (2009). In Switzerland electronic voting (or online voting) is a common practice.

The use of referendums and other forms of direct democracy have some benefits but may also entail some risk. But before discuss their pros and cons let's briefly outline the origins of the idea of direct democracy and why in most countries this has been superseded by representative democracy.

What is direct democracy?

Representative democracy can be supplemented by some of the instruments of direct democracy such as referendums and popular initiatives. Referendums can be advisory or binding and are generally used in decisions concerning constitutions, declarations of independence or other fundamental laws governing things like electoral systems. Popular initiatives are petitions that, when signed by a minimum number of citizens, oblige the government to discuss an issue or to submit it to referendum. Referendums can foster political culture and involvement. Direct democracy empowers people. Binding referendums give citizens stronger control over political decisions (Heywood 2013). The best example of direct democracy is the political system Switzerland where the use of these instruments is extremely frequent at the federal (state), cantonal (regional) and local levels. Moreover the development of electronic direct democracy thanks to innovation in communication technology is creating new opportunities for the direct participation of citizens in government.

The use of the instruments of direct democracy nevertheless entails some dangers. For example, the choices offered to citizens in referendums are few and are fixed beforehand. The citizens may not be interested or not agree with the options presented. Whoever has the power to define the question has the capacity to shape its outcome. For instance, there is was great controversy about the wording of the question and the options for the 2014 Scottish Independence Referendum. Referendums are claimed to excessively simplify complex issues and reduce the possible outcome to two options. Many analyst compIain that referendums usually lead to populism and that populist leaders try to take advantage of them. For instance in any authoritarian regimes, referendums and acts of mass acclamations (voice votes) are used to legitimize policies that could be considered nondemocratic elsewhere. Dictatorship and semi-authoritarian regimes use them as often as democracies. Moreover, where political views are polarized or popular leaders claim to speak on behalf of "the people", referendums can be utilised to bypass some of the representative institutional checks and balances (Altman 2011). Populist movements and leaders tend suggest referendums as a way to bypass party dynamics and the usual established legal procedures. The difficulty to reverse decisions made through referendum is another source of concern. For instance, many people are claiming the repetition of the Scottish independence referendum and a second Brexit consultaion.

To summarize, referendums are instruments of direct democracy. They give citizens the capacity to express their political views. However in practice they become problematic and are sometimes used to manipulate people.

Go to the discussion forum and tell us what you think about the use of referendums in modern democracy. Do you think they are being helpful to improve the quality of our democracies or do you think they are used as a populist tool for political goals? What are your views on the Scottish independence referendum and on the Brexit referendum?

Related questions: Should 16-year-olds vote in referendums? Should referendums be repeated at least once to verify the consistency of the public opinion on the issue? Is it better to refine our direct democracy procedures or put more effort in improving how parliaments and governments work?

Direct democracy pros and cons, are referendums the ultimate democratic tool?  Vote and explain why. Share examples about referendums to illustrate your angle.