Guyana-Venezuela border: What country should Essequibo belong to? 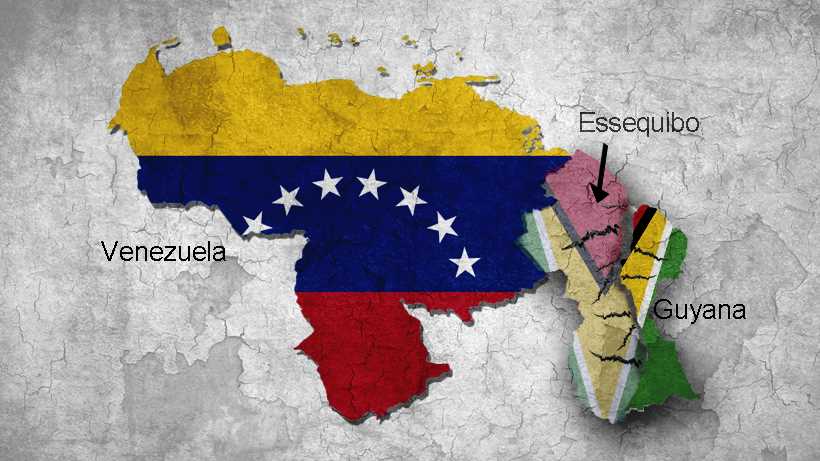 Find out more about the Guyana-Venezuela border dispute over the region west of the Essequibo river. Join our poll and help others make up their mind.

The Guayana Esequiba is a territory subject to one of the most longstanding and territorial disputes in South America. The territory to the west of the Essequibo river has been historically claimed by Venezuela. Guayana Esequiba is an area of 159,500 km² today controlled by Guyana and divided into six administrative regions: Essequibo Islands-West Demerara, Upper Takutu-Upper Essequibo, Potaro-Siparuni, Barima-Waini, Pomeroon-Supenaam, and Cuyuni-Mazaruni.

However, according to the Treaty of Geneva, signed by Venezuela, United Kingdom and the former Government of British Guiana on February 1966, the parties need to agree to find a practical, peaceful and satisfactory solution to the dispute. After the expiration of the period agreed to find a solution, in 1970, the Presidents of Venezuela and Guyana signed the Port of Spain Protocol, a 12 years moratorium on Venezuela's reclamation. Again, no agreement was reached and since 1983 Venezuela has resumed the claims for this region, sometimes referred to as "zone in reclamation". For Venezuela the territory west of the Essequibo river do not belong rightfully to Guyana. The Essequibo question remains formally unresolved.

History of the Venezuela-Guyana border disputes

During that period of colonial emancipations, the former Dutch colonies of Demerara, Berbice and Essequibo were transferred to Great Britain by the Anglo-Dutch Treaty of 1814. In theory the Essequibo river was the western boundary of British territories, but many British settlers moved to the west of the river. In 1822 the Minister Plenipotentiary of Great Colombia, Jose Rafael Revenga publicly denounced that British settlers had usurped a large portion of their lands. Jose Manuel Hurtado, the Ambassador of Great Colombia in Britain presented officially the claim over the border dispute. Spain had previously considered all foreign occupation west of the Essequibo river as territorial encroachment in violation of the Treaty of Münster in 1648 by which Spain recognized Dutch neighbouring territories. Similarly, the newly created Great Colombia, and later, the Republic of Venezuela expected the integrity of its territory to be respected.

Commisioned by the Royal Geographical Society, a German explorer called Robert H. Schomburgk sketched a map with a line defining the limits of British Guiana.  The British Government used this "Schomburgk line" to reclaim some of the territories west of the Essequibo river occupied by British settlers in 1844. However, later research seems to indicate that Schomburgk had originally drawn a different line earlier and that the line was redefined successively to legitimize British expansionist plan in the region. To the extent that years later the US President Grover Cleaveland said that the line had been extended in "some mysterious ways". Thus, according to this theory, the original line in 1835 depicted British Guiana as a 4,920 km2 territory, but in 1840 the British Crown defined it as a territory of 141,930 km² and in 1887 as territory as big as 167,830 km². Great Britain took unilateraly posession of a large portion of the territory in dispute west of the Essequibo river in its plans was taking control of the mouth of the Orinoco river. Venezuela severed diplomatic relations with the United Kingdom and in 1894 requested the mediation of the United States in the conflict. The United States pushed Britain to stop the appropriation of new territories and accept a process of international arbitration through the Treaty of Washington in 1897.

Arbitrations and disagreements on boundary disputes

In 1899 the arbitration process concluded with a ruling favorable to Britain, declaring the Schomburgk line as the border between Venezuela and British Guiana. Britain received most of the disputed territory, including the gold mines. Venezuela protested against the Arbitral Award and accused Britain of influencing the decision of the Russian arbitrator. However, Venezuela could do very little against ruling given the large political and military superiority of the British Empire over the relatively new Latin American country.

In the first Assembly of the United Nations, Venezuela denounced the illegal appropriation of Venezuelan territory by the United Kingdom. Similarly in 1962, four years before the independence of Guyana, Venezuela filed a formal complaint at the United Nations denouncing the vices in the process of arbitration and the collusion between Russia and the United Kingdom. Several academic studies demonstrate the dealings between Russian and Britain during the process of arbitration which granted a large part of the disputed territories to the latter.

In 1966 Venezuela, British Guiana and the United Kingom agreed to resolve the territorial disputes in the Geneva Treaty. Later the same year Venezuela recognized Guyana as independent state but which territories started to the east of the Essequibo river. In 1969 a pro-independence rebellion broke out in the Guayana Esequiba, the Ruununi Uprising, which was neutralized by the Guyanese Armed Forces.  The agreement subscribed by the Geneva Treaty was not reached, and despite the Port of Spain Protocol signed in 1970 no solution has been found yet to the Guyana-Venezuela border dispute. The disagreements have extended to the maritime areas in dispute as well. The Venezuelan Navy in 2013 deteined and oil exploration ship commissioned by the Government of Guyana in the disputed territorial waters. The oil in the cost near the disputed territories may make the resolution of the conflict more difficult than ever.

What do you think? Is Venezuela's claim fair and should the Essequibo area be under its sovereignty? What would be the pros and cons of such decision? Is it possible in the short term? Join our discussion below.

Watch out this video with a debate on the Venezuela Guyana dispute:

Guyana-Venezuela border: What country should Essequibo belong to?​ Vote and tell us why. This is your opportunity to raise awareness about this issue and convince the international community.


Guyana-Venezuela border: What country should Essequibo belong to?