President Trump pros and cons: will he deliver on his promises? 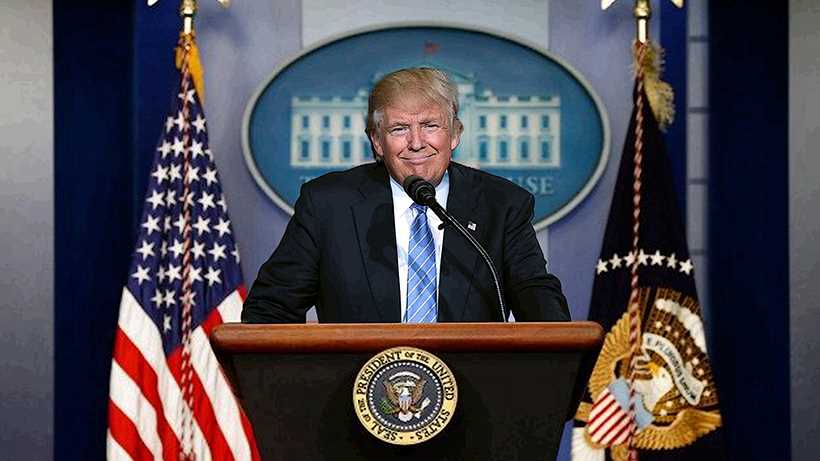 Source: Composite image by Gaius_marius based on a Gage Skidmore image

Donald Trump made many promises during the electoral campaign. His controversial statements were severely criticized by his opponents and defended by his supporters. We discuss the advantages and disadvantages of Trump as President of the United States and if he will be deliver on his promises. Check out our poll and share your views on the discussion forum below.

Paul McNeil is a tech analyst specialized in the political and moral perspectives of today’s innovative world. He has a worked as a news writer and TV anchorman and published articles in several websites including Newsmax, The Hill, ArabNews, American Thinker, Canada Free Press and TechMoralitics. You can folllow Paul  McNeil on twitter (@mcneil_lfc)

That which very few predicted has become reality: business tycoon Donald Trump has been elected as President of the United States. Donald Trump controversial inaugural address on 20 January 2017 emphasized the need to prioritze American interests ("America First") and fight against illegal immigration. The international press has criticized Trump's speech for being aggressive and anticipate growing tensions with some of the traditional allies of the US. Throughout his campaign he has pledged to remain loyal to his main maxim of “Making America Great Again.” But what does this truly mean? How can we break this down into a set of policies or objectives? What are the views of Donald Trump on immigration, corruption, foreign policy, free trade and NAFTA? There are various parameters and factors that must be taken into consideration.

The campaign of this former reality TV show host of The Apprentice has experienced its ups and downs. Donald Trump's promises and controversial statements have attracted the attention of the media and political analysts all over the world. Many have argued that Trump is dangerous and one of the most clear examples of populism in current politics. However, in the context of political polarization in America, Trump has managed to connect with the disillusioned and dissatisfied electorate and, against all odds, beaten Hillary Clinton in the race for the White House.

It has become a tradition after all presidential elections in America for the winner to have their their first 4 years in the Oval Office defined by and forecasted on their first one hundred days as president. In this time they are seen to set their course and lay their objectives out for the years ahead. And yet, Trump has vowed a very busy first day in office, pledging to rid as many signs of Barack Obama’s presidency as possible. One may even describe Trump as a man on a mission to revitalise the protectionist and nativist nature of America, going back to the hardcore conservative school book as a result. How will he address the major issues in America?

After 8 years of highly controversial foreign intervention by the Bush administration, and 8 years of relative inaction under Obama that many believe rendered the rise of ISIS, we must brace ourselves for all possibilities under a Trump presidency. Trump's views on foreign policy have been considered somewhat unconventional. He may even weigh a policy of not guaranteeing protection to NATO allies in case of an attack, while it remains highly unlikely.

Trump would be a symbol of the nationalist “America first” perspective, even threatening to call back troops from Europe and Asia if U.S. allies in those regions of the world fail dig into their pockets for American protection.

A sensitive issue remaining to be clarified remains how America will deal with Syria, ISIS and the entire Middle East. Trump has pledged to launch an intense bombing campaign to push ISIS out of Syria and Iraq, yet history shows pre-election vows tend to change significantly once a candidate comes into office and starts understanding the realities of the world from a president's perspective. The Obama administration and the Democrat party have dealt serious blows to ties with Israel, Saudi Arabia and other Gulf Arab countries by warming relations with Iran. This will remain a major testing ground for a Trump administration as he attempts to deal with these wounds.

In the early days Trump’s presidential campaign was completely defined on a major immigration overhaul. Many are bracing themselves for some of the most controversial shifts in American immigration policy history, despite this country being known as a demographic melting pot for the past 250 years. We all remember how Trump proposed to expel all undocumented immigrants from the US. This is considered as impractical by many experts, especially considering the impact on the American labour market.

However, illegal immigrants with criminal records are immediate targets for a Trump presidency. Such individuals total less than 170,000 in America - while Trump claims they actually number over 2 million - and the real question lies in how America will close its doors to foreigners coming into the mainland. Under current regulations, refugees from Syria, for instance, undergo a 24-month policy of screening. This brings into question how a Trump Administration will seek to bring about a major overhaul, or continue the status quo for the first 12 months and evaluate their options afterwards. Trump has refused to provide any details as of yet, especially on how his Mexico wall policy will go forward.

Trump has promised to bring an end to Washington politics being controlled by big money. His vows include downgrading the influence of special interests, describing them as “corrupt.” Trump has gone as far as attempting to voice words similar to the legendary Abraham Lincoln by vowing to establish a government “of, by and for the people.”

Imposing term limits on all Congress members and a five year ban on officials in the White House and Congressional turning into lobbyists after they leave office are just two of the reforms he intends to implement on day one in office. Trump is also targeting a policy to shrink the government by hiring no more federal employees, with the exception of the military, public health and safety.

Trump on NAFTA and free trade

Free trade, a traditional flag of the Republican Party, is forecasted to be set aside, making room for a series of protectionist policies. Closing America’s economic borders will be a new slogan in the White House. We may even hear immediate calls for renegotiation with Canada and Mexico over the already controversial North American Free Trade Agreement, aka NAFTA.

The Trans-Pacific Partnership (TPP) may see the U.S. under Trump exiting such a coalition, considered highly sensitive by conservative Americans. The 12-nation pact sought to strengthen economic ties by adopting trade and slashing tariffs to enhance their growth effort. Critics, however, have argued such a binding vow leads to major competition between the labour forces of these countries, especially considering the benefit of cheap wages in Southeast Asia in comparison to America.

Will Trump be a good president? Will he deliver on his promises?

Rebuilding American infrastructure, creating millions of jobs, taking care of veterans, encouraging national economic growth by tapping into untapped talent, vowing to get along with all nations willing to get along with America, dealing with all nations fairly and seeking common grounds with the entire globe were a few of the policies vowed by Trump in his victory speech.

The first 100 days will be key to figuring an image of a Trump White House, parallel to the Trump Administration lineup of secretaries and advisors. Many polls, analysts and critics are questioning their evaluations of these elections. Eyes are now on Trump and how he will act based on the policies he pledged.

Will he remain loyal to his words, or will the reality of domestic and foreign policies sink in and demand very responsible actions from his administration and the general Republican Party? Were Donald Trump's promises realistic? Will he deliver upon them? How will history judge Trump's presidency?

This list summarizes some of the main strengths and weaknesses of Donald Trump as the future US president:

These are some of Donald Trump's most polarizing quotes:

Emerging questions: Is Trump dangerous, a threat for world stability? Were some of Trump's controversial statements during the campaign simply rhetorical devices to win votes? Can Trump shake up the establishment and trully change the country? Is the world safer with Donald Trump as President of the United States? Is the emergence of Trump evidence of the consolidation of a growing nationalistic and populistic trend worldwide? Does Trump represent a necessary shake-up of the US political system?

Donald trump promises pros and cons: will Trump deliver on his promises? The election is over, but you can still cast your vote in our poll.


President Trump pros and cons: will he deliver on his promises?