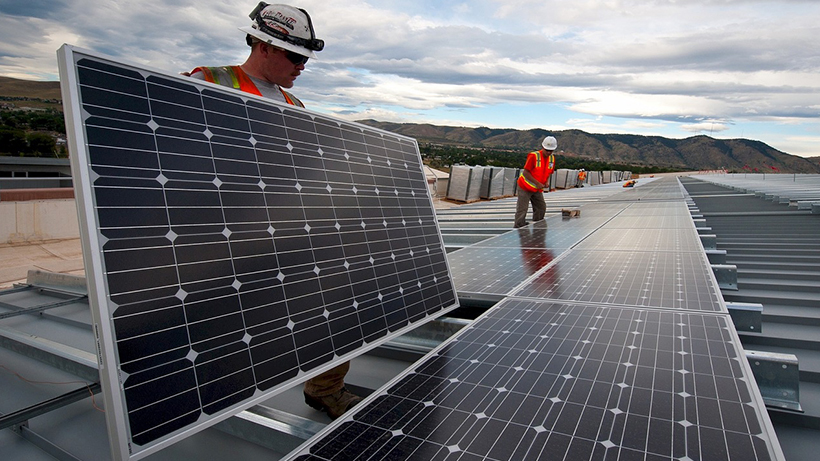 We discuss the economics of renewable energy, focusing on the creation of green energy jobs. Find out more about the pros and cons of solar energy, wind energy, geothermal energy, hydropower and other replenishable resources

The world is undergoing a global energy transition with important economic and environmental implications. Thanks to technological progress, traditional sources of energy such as coal, oil and gas are being gradually replaced by renewable resources. Renewable energy is collected from sources which are naturally replenished on a human timescale, such as wind, rain, tides, sunlight and geothermal heat, and, therefore, contribute to preserve our planet.

The 2017 Global Status Report, by the Renewable Energy Policy Network for the 21st Century (REN21) shows that newly installed renewable power capacity set new records in 2016 with an increase of 9% vis-à-vis 2015. Solar energy accounted for 47% of the total additions, followed by wind power (34%) and hydropower (15.5%).  Half a million solar panels were installed every day in 2016. Global renewable electricity capacity overtook coal to become the world's largest installed power source for the first time. This transformation in the energy sectors has deep implications in labor markets all over the world. Thousands of new green energy jobs are created every day.

However, despite these signs of progress, many argue that this global energy transition is not happening fast enough. In order to meet the goals established in the Paris Agreement against climate change and keep global temperature rise below 2°C compared to pre-industrial levels, renewable energy needs to grow faster. For instance in the US "only" 14.85% of the domestically produced energy comes from renewable sources. Why are we still relying so much on fossil and nuclear energy? A better understanding the economics of renewable energy may help answer this question. Next we discuss some of the pros and cons of renewable energy with particular emphasis on the jobs that renewable energies are creating.

Renewable energy is a broad concept that refers not only to improving the quality of the environment but also to stimulating the economy, running businesses, and creating jobs. According to IRENA (International Renewable Energy Agency), by 2030 the sector will provide 16 million jobs. It is estimated that there are 9.8 million green jobs (all renewable included). China is already employing 3.6 million people in this sector.

The benefits of renewable energy are undisputable due to the fact that creating jobs in the clean energy sector improved the air quality, avoids hazardous climate change, and provided services to 1.3 million people who lack the access to fossil fuel facilities. Moreover, new techniques are contributing to an important increase in the energy efficiency of renewable sources, which makes more profitable these investments.

For the last decade, the solar energy market has managed to create jobs 12 times faster than the fossil fuel sector. For example, from 2014 in the United States the workforce had a yearly increase of 20%, which means that in 2016 it reached more than 200,000 total solar energy jobs created.

You may ask yourself: What kind of jobs can you perform within the field? In fact, the solar industry and other renewable sectors are searching for employees specialised in sales, finance, installation, research and development, maintenance, distribution, etc.

Building wind energy infrastructure requires manufacturing skills because the sector is similar to making generators, sensors, cases and hubs. But renewable industries need people with experience in fabricating plastics, metal equipment, and electrical products, so there is a chance for every individual with engineering or financing background to start a job in clean energy.

One research showed that the solar industry employs more people than the crude petroleum/gas extraction sector and the coal/gas pipeline building industry combined. In such a way, renewable energy contributed to an increase in employment in the US, which is a good performance indicator of the national economy.

Job seeking and saving the environment are connected to each other, so why not combine the two? Solar panels do not manufacture themselves. Heat pumps do not maintain themselves. These activities require intensive labor. Moreover, renewable energy plants generate a new demand for goods and services in the areas where they are located, stimulating local economy and creating indirect jobs.

Investments in carbon-intensive energy equipment will pay the price through increased risk of global warming and climate change. But, if we stick to investing in renewable energy we will minimize these threats and provide more jobs, maintain sustainable development, and promote a healthy and happy population.

Watch this video on how renewable energy creates jobs

Are There Only Benefits to Renewable Energy?

We should also consider some disadvantages of renewable energy. Most analysts agree that clean technology is mostly beneficial, however, there is always a negative side to the story. These are some of the cons of renewable technologies that are often used argued.

For example, renewable technologies require important initial investments and some of its economic and environmental benefits are only visible in the long run. Generating and storing clean energy is expensive. Governments and companies seeking to maximize their short term interests or suffering some financial constraints may prefer to rely on pre-existing, usually less environmental friendly, sources of energy.

Renewable energy power plants stations often require special locations depending on the wind speed and solar array direction, so people may have to commute long distances for work everyday. Alternatively, the company could provide special transportation, but that would require further investment. Some of the most viable locations for renewable energy production are concentrated in certain places: some countries may see lots of opportunity to develop renewable energy production, while others may see very little.

Clean energy creates jobs, but at the same time, the amount is finite. Therefore, only the best prepared and most professional will benefit from these new jobs. If green energy replaces other traditional sources of energy, many of the workers employed in traditional power plants may lose their jobs. So unemployment may temporarily grow in some regions.

Finally, working in renewables can be quite dangerous. The risk of working in hazardous construction is as high as in coal and oil sectors—especially when involving heavy machinery.

Overall, it is up to you to decide whether renewable energy offers that many benefits as it claims to bring, so to help you make a wise decision watch the video above. Follow this link and take the quiz to check your suitability in clean energy.

If you are interested in energy and the environment, check out other netivist debates on the pros and cons of fracking, hydropower, nuclear power and solar energy.